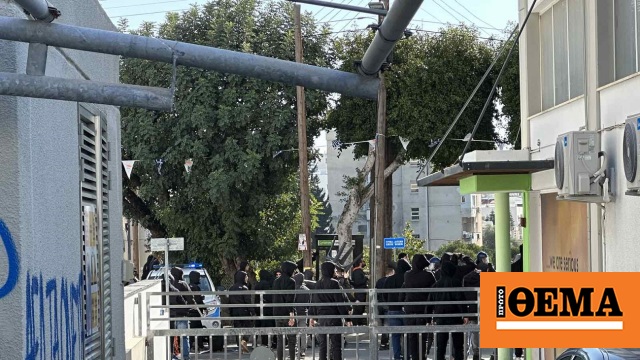 injuries police officers And Damages In cars and during shop windows episodes Which took place this morning in the area of ​​\u200b\u200bthe bunker and tomb of its leader EOKA, in LimassolAnd Where a memorial service was held Giorgio Griffa Digni.

Episodes began shortly after 10 when young fans of his football teams APOEL so is it Apollo They went to the area outside the EOKA leader’s hideout located on Griva Digeni Street, and started arguing with each other and causing a commotion. Rocks, Molotov cocktails and other things were thrown between the fans and the police trying to enforce order.

Incidents ceased and were contained after two hours, after strong forces rushed to the area. Police have collected evidence from the accident site and an investigation has already begun to identify the culprits. From these serious incidents, a number of police officers were injured, and cars, shop windows and trash bins were damaged.

They had warned a few days before of disturbances at the Griffa memorial EOKA Players Associations.

The forty-ninth memorial service for its leader EOKA In the Holy Church of Agios Nikolaos, in the presence of the Deputy Minister, President Petros Dimitrios, members of parliament, representatives of local bodies and the public. The memorial service was presided over by the Metropolitan of Limassol Athanasius. Tresaio was held in Digny’s tomb. Former head of the National Guard, Ilias Leontaris, delivered a memorial speech. This was followed by the laying of wreaths and the national anthem.

Grivas is a figure who has divided the country for decades cyprus, As after the struggle for the liberation of EOKA, he became involved in politics and at the beginning of 1970 he came to Cyprus secretly to establish a terrorist organization EOKA B’ to overthrow Makarios in cooperation with the military junta in Athens. The coup took place after his death and eventually led to the Turkish invasion and occupation of 37% of the territory of Cyprus.

Nikos Xanthopoulos died at the age of 89

“The Kamina Furla earthquake has nothing to do with the Atalante fault,” says Likas