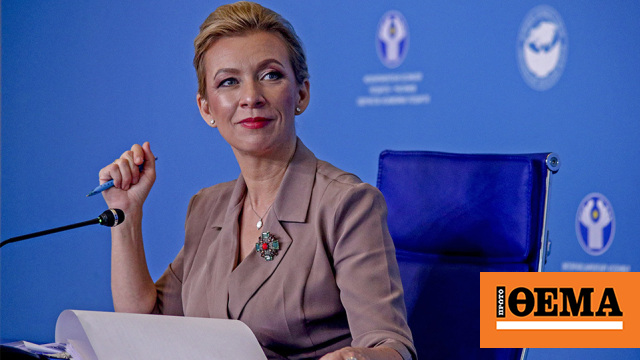 His game … Yes, but it continues on the Russian side regarding the negotiations. The conditions on the basis of which Moscow intends to sit at the negotiating table with Ukraine, were set by the representative of the Russian Foreign Ministry, Maria Zakharova.

As mentioned, Russia Ready to start negotiationsif the new data are taken into account, which implies the annexation of the four Ukrainian regions (Donetsk, Lugansk, Kherson and Zaporizhia) to the Russian lands.

«We are still open to negotiations. We never refused to have it. We are, of course, ready to negotiate taking into account the facts so farMaria Zakharova said characteristically.

According to Reuters, a senior Kremlin official confirmed that there will be talks with the United States on the Nuclear Weapons Reduction Treaty, while at the same time acknowledging that the two sides are holding talks from time to time.

The Russian spokeswoman criticized Berlin for supplying Ukraine with weapons, saying it should push Kyiv toward negotiations. “Instead of using its influence on the Kyiv regime, the German side, contrary to its own laws and regulations prohibiting the export of lethal weapons to Crisis areas and areas of armed conflictcontinues to strengthen the military power of the Kyiv regime with various weapons systems, thereby encouraging the Ukrainian government to continue hostilities at any cost‘, he confirmed.

Ready for talks with Russia, but… with another president, not Putin

In response to calls by the West to start talks with Moscow and after the Kremlin’s position that dialogue will take place when Russia decides, Adviser to the Head of the Office of the President of Ukraine, Mikhailo Podolyak, commented on the publication The Washington Post.

According to the publication, the United States will insist on peace talks if the Ukrainian army regains control of Kherson, and this will allow dialogue to take place from a position of strength.

The Podolyak Commenting on the article, he wrote on Twitter: “Important: Ukraine has never refused talks. Our position is known and open. First, the withdrawal of troops from our territory, the second is all that remains. Is Putin ready for this? of course not. That being the case, then in our constructive judgment we will speak with the next leader of Russia».

Peskov responds to the West

«We are open for talks but not on timeThe Kremlin then replied Western pleas For Kyiv’s participation in the peace negotiations.

Kremlin representative Dmitriy PeskovSpecifically, Russia is open to dialogue with Ukraine, but not at the moment.

«We have also made it clear that we do not see any opportunity for dialogue at this timeHe is done.

The West calls on Kyiv to start peace talks with Moscow

As Russia escalates its aggressive measures, the West invites it Ukraine to participate in peace talks.

After the United States encouraged Ukraine to show it was open to negotiations, a German government spokesman said it was up to Kiev to decide when to hold talks with Russia.