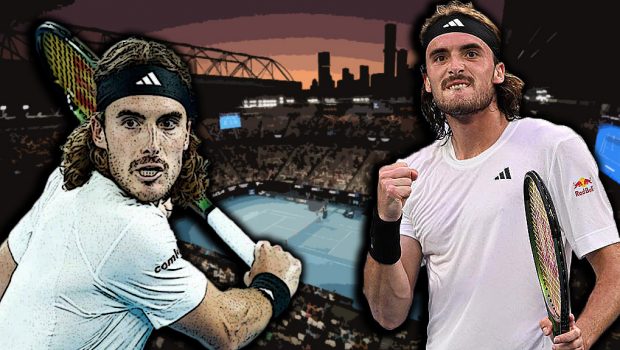 Quentin Hales, Rinki Hijikata, Talon Grikspur, Yannick Scheiner and Jerry Letska. The “victims” of Stefanos Tsitsipas were on the way to the quarter-finals of the Australian Open. A road full of great performances and great victories.

The path that … ends in the world tennis pantheon. Where the Greek tennis player wants to be on January 29th. Where he dreamed of being since he was a child. In the middle of Rod Laver Arena to lift a heavy trophy. The trophy that will turn him into a legend in the sport, as if he managed to win the title in Melbourne, in addition to his first Grand Slam, he will also celebrate the first time in his career rising to the first place in the ATP world ranking!

“Of course, I am one of the favorites to win the title,” Stefanos Tsitsipas declared a few days ago, indicating that he was mentally prepared to bear the weight of the favorite, while after the impressive victory he achieved over the Greek Jerry Letskas. The tennis player confirmed that he feels great and plays the best tennis in his career. “I feel great with tennis. I don’t think I’ve felt this way in a long time. I’m so happy every time I get out on the field. I’m happy playing tennis, there’s all this momentum that makes me so thirsty and wanting to make things happen.”

Stefanos says so. He is not afraid. Nothing and nobody. He’s in Melbourne to take the title. He has done more than half of the work to achieve his goal. But he knows he still has two big battles ahead of him. In the semifinals with Karen Katsanov and possibly in the final with Novak Djokovic. The two steps left for him to write his name in golden letters in the history book of the world of tennis and enter the closed club No. 1.

This year, Stefanos Tsitsipas has something he didn’t have in previous years. Something that makes him… invincible: a solid backhand. Throughout his years of competing at the top level, his opponents would “beat” him with a backhand. The one-handed backhand is impressive in our eyes, but it’s a very difficult and risky shot for him.

Until a few months ago, Stefanos’ weak point was the backhand. In every strike Tsitsipas made, there were many chances for error. It either results in an easy foul, which will give the point directly to his opponent, or it gives a short and anemic return, from which his opponent will take advantage. The balls that the tennis player had in front of him either gained the upper hand in rallies and automatically drove him into a defensive position, or finished the point directly with a winner.

This year, that has changed. Stefanos has improved his hand tremendously. This is reflected in the statistics of matches played by the Greek tennis player so far in the Australian Open. In his first round match against Quentin Hales, he made only 4 unforced errors on his backhand. In the second round match against Rinki Hijikata, he had 6 unforced errors on his backhand, while in the third round match against Talon Grikspur he had 7. In the fourth round against Yannick Sinner (ss the match went to five sets), he had 25, but Still short of his easy forehand errors (27). In the quarterfinals with Jiri Litska he had 10 backhand and 16 forehand.

In all his matches to date, unforced errors on backhands have been lower than unforced errors on forehands. The Greek tennis player worked hard in preparation to improve his backhand and succeeded. In the match with Jiri Litska, Stefanos was truly unstoppable. He didn’t feel… anything.

Having, of course, received similar instructions from his team, the Czech went on to hit Tsitsipas’ two backhands. blow to detonate. Repeatedly on the left side of the Greek tennis player. Wait for the error. Without avail. Stefanos was hitting one backhand after another. with stability. Strongly. With the correct placement. Often, our compatriot turned his body like a ballerina and from a position of defense directly on offense, finishing points inside and out on strikes.

A powerful backhand can lead Stefanos to the prestigious trophy and to the top of the world rankings. He knows he can do it. He knows he has everything it takes to be number 1 in the world and be proud of all Greeks. He knows, however, that in order to succeed he must stay focused. Head down but with determination, stubbornness, passion, charm and nobility. Like the ones you brought in the previous games. He did five of the seven steps. But it takes two…