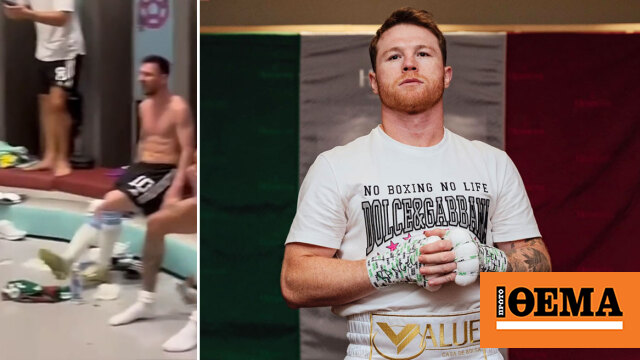 On November 28, the world boxing champion Canelo Alvarez He lost his temper when he came across a video in which he allegedly saw him Lionel MessiAnd the To clean the floor in a Mexican shirt.

In a series of tweets, Canelo furiously wrote: “Messi cleans the floor with our shirt and flag?”

They saw Messi cleaning the floor with our shirt and flag ????

Threatening Messi with physical violence, Canelo wrote in a follow-up tweet: “He should ask God not to find him.” His tweet included the fist and fuck emoji.

added: “Since I respect Argentina, he should respect Mexico! I’m not talking about the country as a whole, only about m… which Messi did.”

The video that angered the boxer

By looking at the video, it appears that the topic has been exaggerated. The video in question was from the celebrations that followed the World Cup match between them Argentinian Where is Mexico? Argentina won the match 2-1. The first goal was scored by Lionel Messi, and the second was scored by him Enzo Fernandez.

Messi was seen celebrating with the rest of the team and was either standing on the Mexico shirt or right next to it.

A few seconds into the video, Messi appears unaware that the shirt was on the ground, sits down, tries to take off his shoes and gently kicks the shirt.

It is worth noting, according to reports, that Messi took the shirt in his hands from a Mexican player after the match, which is a common occurrence.

Sergio Aguero with Messi
The person who carefully followed the issue that appeared on Twitter was Sergio Aguerowho rushed to his friend’s defense and tried to explain to the Mexican boxer what had happened. “Chief Canelo, don’t look for excuses or problems. You definitely don’t know anything about football and what happens in the dressing room.” Originally wrote to follow: “After matches, the jersey is always on the ground because of the sweat. Then, if you look closely, he makes the motion of taking his shoes off and touches them inadvertently.”

Mr. Canelo, don’t look for excuses or problems, you certainly don’t know football and what happens in the dressing room. The jerseys are always on the floor after games are over because of the sweat and then if you see well he makes the move to remove the swag and accidentally hits it. https://t.co/zfftTXH3JB

A Twitter user who was quick to defend Messi wrote in a comment referring to Canelo Alvarez: “Messi exchanged shirts with a Mexican player and he was on the floor. Brothers, while they were celebrating, all things were thrown on the floor. Mexico lost the unfortunate move. Stop crying about it, you have to motivate the team to win the next game.”

Canelo cries over Messi, who exchanged shirts with a Mexican player and laid them on the ground. Like its brethren were partying and having all sorts of things on the floor, Mexico lost the unfortunate move. Stop crying on Twitter, you must motivate the team to win the next game https://t.co/minlwo0Dfm

Shall we go to March? – Mitsotakis’ “election” accounts

A severe storm is on the way – what areas will it hit?

HumanRights360: how 210,000 euros went into the pocket of the founder of the NGO, instead of refugees