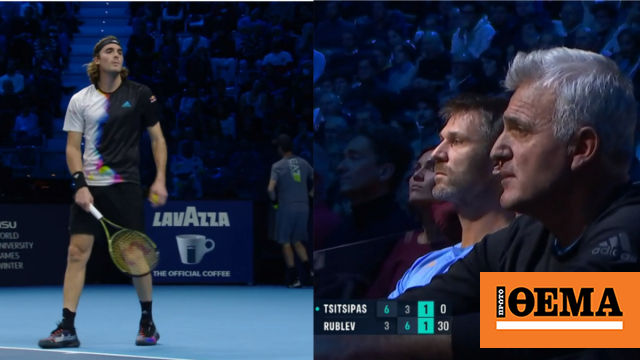 for Stefanos Tsitsipas Nothing went right in the third set in the match against Rublev, who was advancing to the semifinals ATP Finals.

Rublev returned to claim victory, and regained his composure, unlike Tsitsipas who was losing his temper as time went by.

A typical moment in the third game of the third set, where Tsitsipas finally got a break.

With the balls in his hands and the score at 0-30, Tsitsipas threw the ball hard towards the side where his team and his father Apostolos were, with the crowd applauding his move.

Soon after, the tense scene continued. Apostolos Tsitsipas in a strong tone imparted instructions to Stefanos Tsitsipas from the position he was sitting in and was visibly disappointed by the fact that his son could not do on track what he was telling him he had to do in order to get back into contention in the match.

Prize money received by Tsitsipas
Stefanos Tsitsipas may not have made it to the semi-finals of the ATP Finals, but he has earned close to €700,000. According to what was announced by the ATP about the prize money that it will distribute to the tournament participants, Tsitsipas received 318,099 euros for the three matches he won in the group stage, while for his one victory he received another 381,023 euros.

“Ship of the World”: Father Antonio’s confession of a “great wave of complaints” – declares his indignation

Twitter: A wave of resignations after Musk’s warning – losing 1,200 employees in one day