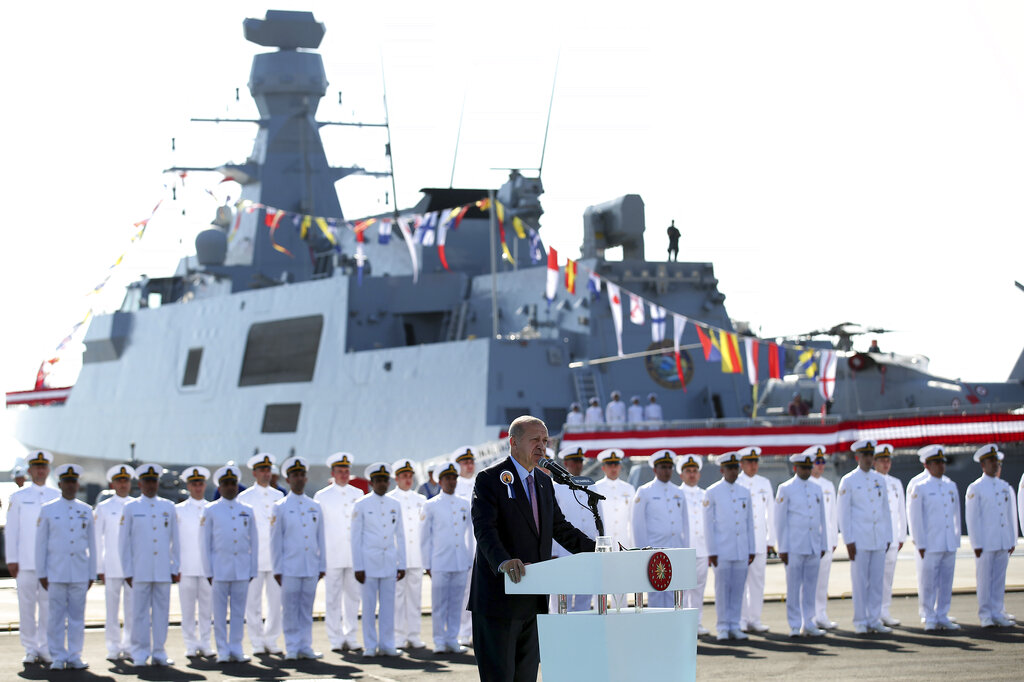 A serious regional crisis threatens to be caused by Turkish intervention in Libya, as it is trying with military assistance to manipulate political developments within the country and at the same time create demarcation in the maritime areas that have not been demarcated, which puts the “handover” of Libya’s energy wealth.

With its involvement in the Libyan crisis, Turkey not only provokes countries such as Greece, against which attempts have been made on the issue of maritime areas, but also provokes neighboring countries to Libya such as Egypt and other Arab countries that indicate the need. To exclude third party interference in Arab affairs.

Erdogan’s threat in an interview Wednesday night that Turkish drilling rigs and research vessels are ready, accepting offers from third countries and “remind Libya that Turkey may also engage in research” (SSS on land and sea) shows that Ankara blatantly ignores direct and indirect warnings to Americans, Europeans and even Egypt to avoid activating the recent agreement signed by Libya with Turkey to activate the Turkish-Libyan memorandum.

Certainly, the unanimous warning from the international representative that the Tripoli government does not have the legitimacy to sign the agreements that bind the country, leaves a window open for Ankara, as the Libyan National Oil Company with a significant level of autonomy can enter directly. Negotiations with the Turkish Communications Regulatory Authority and assigning it investigations in maritime areas. Besides, the Libyan government inherited from its predecessor the Turkish-Libyan Memorandum which, despite the reactions due to the increasing role of Turkey in internal affairs, its content was not questioned with very few exceptions by the Libyan political staff.

However, any attempt to start research activities in an area that does not belong strictly to the Libyan territorial waters or the international waters of the possible Libyan continental shelf based on the middle line (between Greece and Libya) is sure to cause a crisis. In the region, the reaction is from Athens, which is expected to have support (diplomatic at least) from Egypt as well.

Also interesting is the reaction of Major General Haftar, head of the Libyan National Army, who, without reference to the original Turkish-Libyan memorandum, once again denounced the Turkish intervention and warned that if the political impasse was not resolved soon, the solution would be over. Come with arms.

It is clear that at a time when the crisis with the Russian invasion of Ukraine has reached its climax, no one in the West, especially the Americans, does not want a new crisis to erupt in the southeastern flank of NATO, next to the Suda base. A confrontation that will affect open access to the straits but also the alternative connection route to the Black Sea, via Alexandroupoli.

But this should be a strong argument for Athens to call on both Washington and the European Union to tell Turkey that unilateral and de facto measures must be avoided.

However, Turkey made sure to send its message by updating the cause of the war due to the discussion in Greece about the possibility of extending Greek territorial waters to 12 nautical miles, although the discussion concerns the eastern Mediterranean and not the Aegean with Turkey, but, no It appears that this geographical division.

The controversy over the territorial waters extension creates pressure on the government, but at the same time it also creates confusion about what to do. If it is enough to choose only the area south and east of Crete, or if the extension must be made to the east of the entire Kastellorizo-Rhodes-Karpathos-Crete arc (and not only south of Kastellorizo). There is of course also the more moderate option of depositing the outer limits of the Greek EEZ in the Mediterranean based on the midline so that the so-called “Maniatis Amendment” acquires a more specific content.

However, it must be made clear that any decision to gradually/partially extend territorial waters will also entail the responsibility to protect an expanded area of ​​national sovereignty by 6 nautical miles, particularly in the area that overlaps this area by the unilaterally declared Turkish exclusive economic zone. . Based on the Turkish-Libyan memorandum, it is not at all certain, as analysts and politicians hope, that this step will force Turkey and Libya to come to the negotiating table.

However, Ankara appears to be preparing for all eventualities, and Mr. Tsavusoglu’s SETA Think Tank speech was the official summary of Turkey’s allegations against Greece, while at the same time setting out the framework in which Turkey would agree to start a dialogue.

The framework presented by Mr. Tsavusoglu forbids any step forward.

Turkey rejects the Greek position that the priority is to deal with the legal dispute over the delimitation of maritime zones with reference to The Hague (a process likely to necessarily address the question of territorial waters as well as Turkish claims of “grey areas”) and insists that comprehensive negotiations should take place even on those Issues that are Turkey’s unilateral objections: territorial waters, airspace, demilitarization of islands linked to Greek sovereignty, “gray areas”, and issues of international jurisdiction and jurisdiction (FIR, NAVTEX version, SAR).

It is clear that Turkey, with this agenda, tightly blocks any attempt to resume dialogue and at the same time wants to avoid referring the delimitation of the continental shelf to The Hague, which will de facto judge the legitimacy of the Turkish-Libyan memorandum. The unilateral deposit of foreign coordinates is the boundary of the Turkish exclusive economic zone. Turkey finds an opportunity and hides behind the exception made by Greece regarding the jurisdiction of the Court in matters of defense and thus declares that we either discuss everything and if necessary there is a Hague route or there is no discussion at all..

Of course, even if Greece withdraws its withdrawal (an option with huge political problems), it is not certain that Turkey would agree at the end of the road to referral to The Hague, having previously obtained Greek recognition of it. The validity of her claims through “dialogue”.