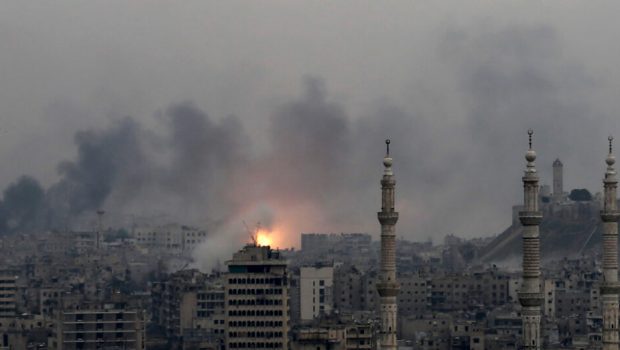 its Ministry of Defence turkey He announced the launch of Operation Forked Sword in northern Iraq and Syria, areas he believed he had “used as bases.” Kurds terrorists.”

“The planes took off from their bases and the air operation began.” And the ministry made it clear in a statement, a week after the bloody attack that she was subjected to Constantinople.

Read also: The Turkish journalist went for … wool and came up with a haircut – the “paid” response from the State Department

The statement added that the operation is taking place “on the basis of legitimate defense rights stipulated in Article 51 of the Charter of the United Nations, with the aim of neutralizing terrorist attacks from northern Iraq and Syria, ensuring border security and eliminating terrorism from its source.”

On Saturday evening, the Syrian Kurdish forces accused Turkey of bombing areas under its control in the northern part of the Syrian territory, while Ankara announced that the “time of reckoning” came after the terrorist attack in Istanbul last Sunday, November 13.

The air strikes were launched even though the PKK and the US-backed Syrian Democratic Forces (SDF) a few days ago rejected Ankara’s accusations of being behind the attack on Istiklal last Sunday, in which they lost the six people. their lives and injured 81 others.

According to the “SDF”, the Turkish bombardment targeted positions of the Syrian Democratic Forces in the governorates of Aleppo (north) and Al-Hasakah (northeast), especially in the city of Kobani, a short distance from the border with Turkey.

“Kobani, the city that defeated the Islamic State, is being bombed by the Turkish air force and the Turkish occupation forces,” said Farhad Sami, a spokesman for the Kurdish-led Syrian Democratic Forces. He had categorically denied that the Kurds were behind the bombing of independence.

The Syrian Observatory for Human Rights, a British-based non-governmental organization that relies on an extensive network of sources in war-torn Syria, said more than 20 raids by the Turkish army in the two provinces.

The bombing killed at least six members of the Syrian Democratic Forces and six Syrian soldiers, according to the same source.

Kurdish organizations do not announce losses in their ranks. However, Mr. Sami confirmed that Turkish bombing also occurred on facilities in which the Syrian regime forces are deployed in Raqqa, Al-Hasakah (northeast) and Aleppo (north), citing deaths and injuries.

The leader of the Syrian Democratic Forces, Mazloum Abdi, condemned the “aggressive and brutal” Turkish bombings. He added, “The Turkish bombardment of our areas threatens the entire region. It does no good to anyone. We will do everything we can to avoid a major catastrophe.” He said on Twitter, “If war breaks out, the whole world will be eaten.”

The targeted sites in Syria so far include Al-Managh airport in the northern countryside of Aleppo, and sites of the Democratic Union Party militia in Ain Al-Arab (Kobani), Ain Issa and Darbasiyah. pic.twitter.com/qXbo6akik2

“The miscreants will be held accountable for their malicious attacks,” the Turkish defense minister added. He added in a second post, “The terrorists’ nests were leveled with precise strikes,” accompanied by a montage of the destruction of a target from the air, without specifying its location.

The PENÇE KILIÇA air operation was carried out in areas in northern Iraq and Syria that were used as a base by terrorists in their attacks on our country.https://t.co/zgKEsTB3Th pic.twitter.com/E3sI7OjqxY

Trying to take advantage of the attack on Constantinople

The focus, after the Istanbul attack, not only on the Kurds and the PKK, but more on the Syrian Kurds and their YPG militia, is not far removed from Turkey’s ongoing efforts to secure tolerance from both the United States and Russia with another large scale. – A large-scale operation against the areas of Syria controlled by the Kurdish forces.

An operation that the United States has so far objected to, because it sees the Kurds in Syria as its main partners there, and then maintaining the American military presence there, as well as Russia because it considers such Turkish military operations to be delayed more. The goal of political unification of Syria under the Damascus government.

Hence the Turkish government’s insistence that the order to attack came from Kobani, that is, from the Kurdish autonomous regions on Syrian territory. While it does not seem coincidental that the prime suspect was announced to be from Afrin, the Kurdish-majority region in Syria that was occupied by the Turkish Armed Forces in 2018 along with the Turkish-backed Syrian National Army forces.