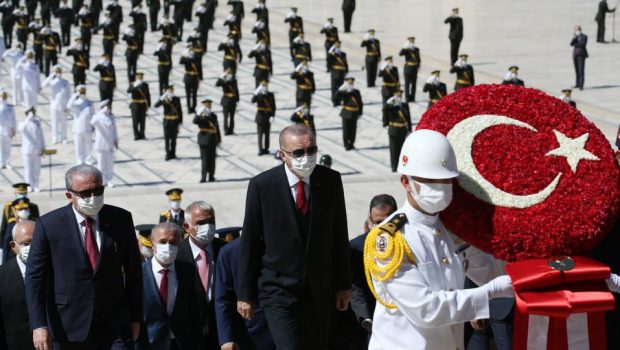 “We can come suddenly one night.” The phrase recently used by Turkish President Recep Tayyip Erdogan for Greece became a catchphrase at the opening ceremony in Fethiye. With him he replied: “Exactly, we can suddenly come one night and we will come.”

Analysts and diplomats have repeatedly recognized that one of the biggest risks in relations between the two countries is that the tension sowed by the political leadership is transmitted to the people.

And if until recently the Turkish people declared that they had no enmity with the Greeks, then the question is whether this can change.

With the risk of intensification since the political leadership included the attacks on Greece and the rhetoric of war in its basic pre-election narrative.

Asked about this, Kyriakos Mitsotakis replied on Saturday from Alexandroupoli that he did not expect a “hot episode”. But he asked Turkey “to realize that exploiting foreign policy for reasons of internal partisan consumption is not the right strategy.”

Anthony Blinken’s trip to Greece – Turkey and Israel, which, according to the first information from diplomatic sources, the State Department has begun to investigate at the program level, with the arrival in Athens on February 20-21, can also serve as a message.

A message from the United States in every direction to avoid a “heat attack” or “accident” until the elections. “Drop Ringtone” message.

This is because the Eastern Mediterranean region has taken on increasing geopolitical importance for the United States, once again. In light of the Russian invasion of Ukraine and the need for energy independence from Russia.

After all, Greece – Turkey and Israel are two countries directly related to energy planning in the region.

And Ankara has already declared that it does not intend to remain a bystander in the new energy avenues.

The US-brokered Lebanese-Israeli agreement also sent a message that the region needs solutions and compromises.

Even if the Gordian link that includes Greece, Turkey and Cyprus in the eastern Mediterranean is more difficult to resolve.

Ankara’s blackmail of Sweden and Finland and their membership in NATO also enters the equation.

This is something Erdogan has already prevented since the NATO summit in Madrid last June.

The Wall Street Journal reported that the F-16s ordered by Turkey could become Biden’s “weapon” for Erdogan to open the way for Sweden and Finland to NATO.

The Wall Street Journal also brought the Greek order for the F-35s into the equation, arguing that the two contracts are not related.

However, the associations automatically lead to the fact that the parallel promotion of requests aims to maintain some balances.

Cavusoglu’s January 18 trip to Washington, which will precede Blinken’s tour of Greece, Turkey and Israel, is expected to be the first indication of US intentions in the region.

The messages that will be sent to Ankara to prepare for Blinken’s visit behind closed doors, and not what will be announced, will determine the developments.

With the reactions of US parliamentarians who have already begun to denounce the decision regarding the F-16s and the possibility of their delivery to Ankara, they are helping Biden’s narrative more, in the diplomatic bargaining game that Erdogan started.

With the possibility of an incident between Greece and Turkey continuing as long as the rhetoric of tension continues.