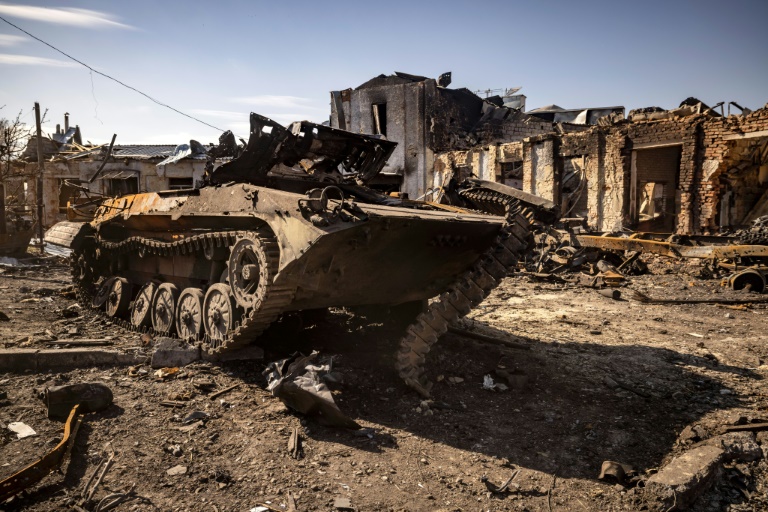 Ukraine: Doubts after Russian announcements despite progress in negotiations

Ukraine and its Western allies were waiting for a military withdrawal around Kyiv and another major Ukrainian city on Wednesday, announced by Moscow after peace talks in which Ukrainian President Volodymyr Zelensky nonetheless saw “positive” signs.

“We can say that the signals we hear in the negotiations are positive, but they do not make us forget about the Russian explosions or shells,” Zelensky said in a video message on Tuesday.

And after about five weeks of war, thousands of casualties and millions of refugees, care had to be taken also within the Ukrainian General Staff.

“The so-called ‘withdrawal of troops’, possibly a rotation of individual units, is intended to deceive the military leadership of the Ukrainian Armed Forces,” he ruled in a press release Tuesday evening.

Sirens were sounded several times in Kyiv on Tuesday night and into Wednesday before they were canceled, in an indication of the anxiety still prevailing in the Ukrainian capital after the announcement by Russian forces.

After talks in Istanbul, Russian Deputy Defense Minister Alexander Fomin announced on Tuesday that Moscow would “drastically reduce its military activity in the direction of Kyiv and Chernigov” in the north of the country.

But for US Department of Defense spokesman John Kirby, this is merely a “repositioning” and not a “real withdrawal”. “We can confirm that we have seen a small number of ‘forces’ begin to reposition,” he said. But “we must be prepared to see a major attack on other regions of Ukraine” and “this does not mean that the threat against Kyiv is over.”

The British Ministry of Defense said on its Twitter account: “It is very likely that Russia will seek to transfer its strike force from the north to the (separatist) Donetsk and Lugansk regions in the east.”

This was confirmed by Russian Defense Minister Sergei Shoigu. Russia achieved its “goal”: “The military capabilities of the Ukrainian Armed Forces have been significantly reduced, which makes it possible to focus attention and efforts on the main goal, which is the liberation of Donbass.”

And for Kyiv’s western allies, it will be necessary above all to judge on paper.

“We’ll see if they keep their word,” US President Joe Biden told reporters on Tuesday, shortly after meeting French, British, German and Italian leaders. “There seems to be a consensus that you have to see what you have to offer,” he added.

In London, Prime Minister Boris Johnson’s spokesman did not say otherwise. He said London would judge Putin and his regime by his actions, not his words. The United Kingdom will hold a donors’ conference on Thursday to mobilize more lethal weapons for Ukraine.

Earlier, these Western leaders warned against any “laxity” in the face of the Russian invasion, and expressed their “determination to continue increasing the cost that Russia paid for its brutal attack on Ukraine.”

However, global stock markets were upbeat, closing sharply higher on Tuesday after these Russian announcements, which sent oil prices lower and the ruble jumping.

After three hours of negotiations in Istanbul, the head of the Russian delegation and representative of the Kremlin, Vladimir Medinsky, reported on “substantial discussions” and said Kyiv’s “clear” proposals for an agreement “will very soon be considered and submitted to President Vladimir. Put it in.”

The Ukrainian negotiator, for his part, explained that Kyiv was calling for an “international agreement” signed by several guarantor states that would “work in a manner similar to Article 5 of NATO and even in a more decisive manner.” Article 5 of the NATO Treaty states that an attack on one of its members is an attack on all.

Mr. Arachhamiya cited, among the countries Ukraine would like to be guarantors of, the United States, China, France and the United Kingdom – permanent members of the United Nations Security Council – as well as Turkey, Germany, Poland and Israel.

Kyiv also demands that this agreement in no way prohibit Ukraine’s entry into the European Union, and suggests “excluding Crimea and the Donbass region under the control of pro-Russian separatists.”

To solve the specific issue of Crimea, which Russia annexed in 2014, Kyiv is proposing “fifteen years” of separate Russian-Ukrainian talks, according to another Ukrainian negotiator, Michalo Podolyak.

On Earth, the hoped-for calm is long overdue. On Tuesday morning, a Russian strike hit the building of the regional administration of Mykolaiv, a city near Odessa, which has nevertheless experienced a respite from the bombing in recent days.

At least 12 people have died and 33 others have been injured, according to a new assessment provided by President Zelensky during a video intervention in front of the Danish parliament. AFP journalists watched rescue workers pull two bodies from under the rubble, and the building was completely destroyed.

The situation also remains very difficult around Kyiv as residents flee villages east of the capital, with residents ensuring that Russian forces continue their brutal occupation there.

“The Russian soldiers came and asked if they could ‘host’ five or six people at night,” said Valery Koryachenko, 50, his lower lip trembling with excitement.

“They raised the safety catch on the gun and politely told us to leave anywhere, saying they live there now,” he said, adding that they even took “socks” and underwear from them.

In the west of the country, Russian forces also bombed the Starokostyantinev military airport on Tuesday, destroying all fuel stocks in this city, said the city’s mayor Mykola Melnichuk.

Ukraine’s deputy prime minister, Irina Vereshuk, said on Telegram that three humanitarian corridors were set up in the south on Tuesday, including from the besieged city of Mariupol, after civilian evacuations were suspended on Monday.

Mr Zelensky on Tuesday accused the Russians of committing “crimes against humanity” in Mariupol, a strategic port city on the Sea of ​​Azov that the Russian military has been trying to capture since the end of February, where some 160,000 people are still believed. to be stuck.

He added, “They blow up shelters when they know very well that civilians are hiding there, women, children and the elderly.” According to Tetiana Lomakina, Ukraine’s presidential adviser, “about 5,000 people” are buried there, but there could already be “about 10,000 dead”.

Following a phone call with French President Emmanuel Macron, Vladimir Putin made the surrender of Ukrainian forces defending the city a condition for the evacuation of civilians from Mariupol.

“To find a solution to the difficult humanitarian situation in this city, the Ukrainian national fighters must stop resisting and lay down their arms,” ​​the Russian president said.

For its part, the French presidency considered that the conditions for launching a humanitarian operation in the coming days to help the residents of Mariupol “are not available at this stage.”

Another topic of concern is the state of nuclear power plants in Ukraine. The International Atomic Energy Agency has announced that its director general is in Ukraine “to hold discussions with government officials” to provide “technical assistance” to ensure the safety of these facilities.

At the United Nations, the United States accused Russia on Tuesday before the Security Council of causing a “global food crisis”, even carrying the risk of “starvation”, by launching a war against Ukraine, Europe’s “breadbasket”.