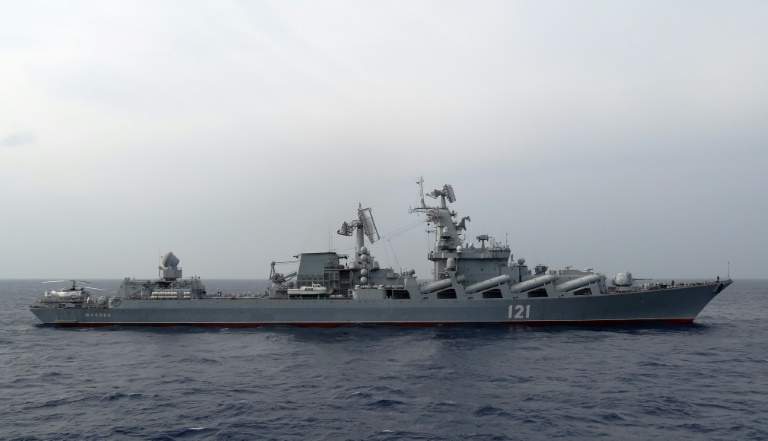 Russian dominance of the Black Sea seemed indisputable until then. The loss of the Russian cruiser Moskva, which was sent to the bottom on Thursday, represents a major operational predicament for the Russians in the war in Ukraine, but above all it is a colossal symbolic loss.

The lead ship of the Russian Navy in the Black Sea, in service since the beginning of the 80s, sank in a few hours and with it a part of the pride of the armed forces of President Vladimir Putin, already tested from the very beginning of his invasion of Putin. Ukraine at the end of February.

According to Moscow, he was hit by fire that detonated an ammunition.

As for how, he was the victim of a missile attack. Friday’s version approved by the Pentagon.

A ship like this is usually trained to carry on fighting after one or more casualties and knows how to control fire, which is a warship’s nightmare.

This 186-meter missile cruiser was armed with 16 Bazalt/Voulkan anti-ship missiles, Fort missiles, the naval version of the S-300 long-range and Ossa short-range missiles. It also had rocket launchers, cannons and torpedoes.

The Russian Defense Ministry said its crew could be up to 680 men.

“It provided air cover to other ships during their operations, including bombing the coast and landing maneuvers,” Odessa Regional Military Administration spokesman Sergey Brachuk said on Telegram.

The operational shortfall is significant and manageable for Moscow, according to Western sources contacted by AFP.

Nick Brown, an expert at Britain’s private intelligence agency, Guinness, told AFP that the army was protecting the entire 150-kilometre radius around its position.

“With Turkey closing the Bosphorus and Dardanelles straits to Russian ships, it will be difficult for Russia to replace its air defense capabilities,” he adds.

But “the rest of the Black Sea Fleet is still a great power,” he says, with modern frigates in particular of the Admiral Grigorovich type equipped with more modern air defenses than the Moskva, though shorter range, and Kalibr surface attack missiles. “The Russian fleet has not gone out of business.”

However, Moscow receives an amazing slap. After giving up, against all odds, absolute control of Ukrainian airspace, and after showing significant tactical and strategic weaknesses in the first weeks of his ground operations, here is the Navy affected.

“We find at sea the same mistakes that the Russians make on land,” a high-ranking Frenchman said frankly.

“The loss of the ship itself is not technically going to set Moscow back, because the Russian Navy’s participation in the war was very limited,” said Maya Utarachvili of the Foreign Policy Research Institute (FPRI) in Washington.

But Moscow can take this into account if it considers “the direct involvement of the Navy in the conflict.”

Because if Moskva has indeed been hit by Neptune missiles, possibly combined with the use of a drone for marking or hoax purposes, as the Ukrainian forces claim, the question of the truth of their equipment arises.

Does Ukraine have naval defense capabilities that Moscow has not assessed? asks Maya Utarashvili, who notes that President Volodymyr Zelensky’s government has consistently called for coastal missiles to fill its gaps.

What kind of anti-ship missiles has Ukraine recently acquired? What kind of damage could be done to the Russian Navy? “.

You will not immediately know the details of the attack on the ship. Watching the hull is essential to stabilize it, but it’s now at the bottom of the Black Sea.

There is still a photo of a prestigious building, distinguished in Georgia in 2008 and in Syria in 2015-2016, with the famously experienced crew who considered it necessary to evacuate the ship for not being able to salvage it.

“It was the command boat,” concludes Pascal Osior, for his part, “and there was probably a crew leading the marine group on the spot.” They will have to designate another building to do these coordination functions.

It’s a very small sea, everyone is within range of anti-ship missiles. Detection and identification are very simple.” The disappearance of Moskva shows the “real weakness” of the Russian Navy.