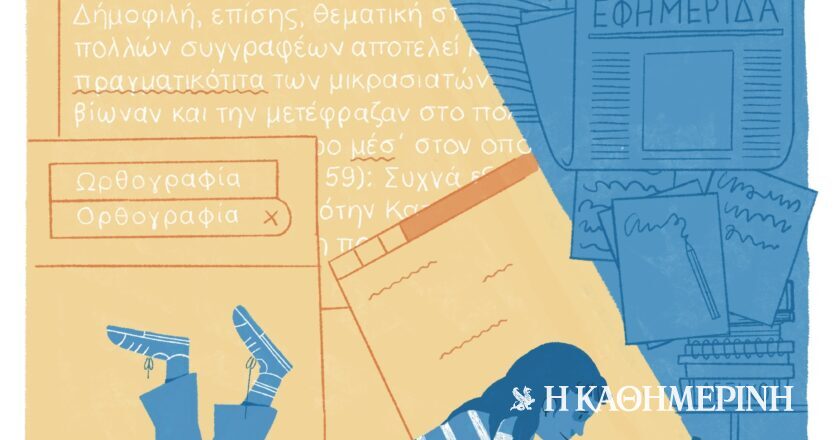 It’s not just students who get lost in a jungle of misspelled words, punctuation and misinterpretations. Students struggle with correct use of adjectives and adverbs, adverbs, tenses, phonetics, and punctuation. Excessive use of new technology is a factor that aggravates students. Teachers, professors and university professors speak in “k” … serious events, emphasizing the need for correct actions, spelling is not only writing words correctly, but also understanding their meaning. The Education Policy Institute has identified the problem and is preparing interventions by 2023.

Vasilis Gounaris, a professor at AUTH’s Faculty of Philosophy, dictated to his students a text containing the word “evaluation” but without specifying the subject. How should students pronounce the word? The subject also determines the ending of the verb: “generally appreciated” or “you appreciate”. From the continuation of Mr. Gounaris dictation, the meaning and spelling of the verb emerged. But pew: one in four students spelled the word wrong. “Nowadays it is impossible to find a fully spelled out text in students’ writing,” said Mr. Gounaris observes in “K”.

Doubtless the problem is acute in science schools. However, it is also increasingly seen in philosophy schools and philosophy departments, whose students are considered Greek-literate. For example, Angela Castrinaghi, a professor at Crete’s School of Philosophy, has drawn up a list of mistakes that her students (must) avoid, while the school has a writing center that deals with this issue. Accordingly, Eleni Karamaleko of Philosophical Athens points out common mistakes students make at the beginning of each semester. The problem begins in elementary education where the emphasis on teaching spelling and the way it is controlled has changed. As university experts observe, in an age where mobile phones and tablets are increasingly used, it is important that the message we want to send reaches the other person.

“Warning, without knowing the spelling, the wrong message is being sent and received,” say primary school teachers who spoke to “K”, recommending that new methods reinforce special emphasis on teaching spelling and, at the same time, familiarize children with it. With written text. As Yiannis Antoniou, head of the Institute for Education Policy (IEP) told “K”, “For two decades, there has been a shift in language teaching towards text and grammar teaching. A textual approach. Now in new study programs to be implemented from next September, from a text-centred approach to language teaching. Without moving, we make sure to combine it with proper teaching of grammar and syntax.

“Spelling knowledge is a skill that develops gradually during primary education. Its teaching in school also counts, but it is also important if children read books, newspapers, and have the performance of correctly written texts. That’s because learning takes place through photography at a young age,” says Lambros Giannouchos, a teacher with 35 years of experience in elementary education. Observes in “K”. “Earlier generations of students learned spelling, even through oral learning. Lessons were isolated and students studied by copying texts. Now, although more hours are given weekly to language class, we are interested in processing language, developing critical thinking. Up to class 4, The teacher is free to teach spelling”, says Alexandros Kiparisis, a teacher with many years of experience in primary education.

Over two decades there has been a shift towards teaching text, at the expense of formal teaching of grammar and syntax in language courses.

“Today, students do not have the opportunity to express themselves in writing, children do not develop the written word, which is an expression of spoken language. As a result, no basis for spelling is given. At the same time, children spend many hours on computers and use automatic word correctors. In this way, they do not pay attention to spelling words, and on social media. “The use of Greek confuses them more. The problem has intensified in recent years,” says Hara Buta, principal of a primary school in Agia Paraskevi, Attica.

“A classic question from our students on every test is whether typos count on the written assessment. This shows a concern for students entering secondary education,” says high school philologist Lambrini Koufagi. “Children don’t dig, they don’t care to dig. Children also learn by sight. For spelling, developing observation skills along with knowledge of rules is correct. However, this is done incompletely in school because children cannot explore things,” he adds.

“The main work is done in primary and secondary education. The question is how education in the modern age helps children to develop spelling. The university cannot replace the first two levels”, Vangelis Karamanolakis, professor of philosophy in Athens, tells “K”, “obviously children are affected by the use of the Internet, while the new They also create words. I would be interested in an education that focuses on meaning.”

“As has happened in the past, we have incorporated new words from the computer, e.g. from Turkish cuisine”, says Mr. Gounaris. As he asserts: “We need to decide whether spelling is important to a well-rounded education. It seems to me that the problem of poor student evaluation and general laxity in schooling has had an impact. It is hypocritical to ask high schoolers to teach ancients and elementary school students to make gross spelling mistakes. Spelling is the most obvious problem. , but this is accompanied by a poor relationship with language. And the same goes for understanding texts. Soon we won’t be able to read a text from the 1950s!”.

See also  Pdts. Congress on Lithium will be held in Bolivia, Argentina, Chile and Mexico

When university faces the gaps of high school

When to use “more” and “many”? How do we use punctuation, how do we use third-person adjectives, how do we use the formal “enough,” when does the verb vallo need one and when does it need two l’s? They are common mistakes found in student writing, even in literature fields. For example, Angela Castrinaghi has drawn up a list for her students with “some common mistakes to avoid from now on.” Indeed, over the years, unfortunately, the Decalogue gets richer! Some of the tips Ms. Kastrinaghi shared with her students:

No matter what
Remember that the equivalent of is a conjunction (how). Two examples: “They Told Me You Love Me / Buy What You Want”.

I show or show
Plan, plan[λ]a, to see[λ]o: It is mainly the third type that gives us difficulty, because it is often not easy to distinguish whether it is the present participle or the infinitive. I recommend substituting another verb for the verb to understand the correct tense and use the correct spelling. For example: I want to put myself forward = I want to keep putting it forward. I want to present myself = I want to show him off.

It is written or written
Is the ending -when, when -tonan used in a verb? To find it easily, remember the following: “The river was pouring (singular) / The water was pouring (plural)”.

See also  What does Turkey support about the episode in Izmir?

Cloud trap
Note the common drop pressure. For example, is “overcast” or “cloud” correct? In the first case we follow the penetration of ancient Greek grammar, and the stress on the scholarly, yet final, subject is the most popular (of vernacular). Another example: Butterfly of Butterflies: We follow the stress rules of the 1st declension, where the tone falls at the end. A third example is the phrase “World War II”: the adjective does not lower the tone, while the noun lowers it.

The fall of nobility
Pay attention to the triple and double-ended acid tones in -иs, -es. These adjectives have both masculine and feminine forms. For example, ‘exalted*, sublime, sublime’. And “the Exalted One [όχι η ευγενή]Supreme [όχι της ευγενή]Supreme”.

* Noble and relative, when used as nouns in the masculine gender, are common: relative, noble.
Surrender to mistakes

– They write the plural verb form incorrectly ([εσείς] is provided instead [εσείς] present).
– Those genders and endings are a big headache: “vote” instead of the correct “vote”. On the other hand, why bother us with different meanings of “rural” and “rural”?
— As to the fallacy of “immediately” instead of “immediately,” that has now been established, and we shall not consider it a mistake.

Both professors admit to emphasizing the misuse of punctuation or the complete lack of punctuation they observe in their students’ writing. Ms. Kastrinaghi reminds her students of their elementary and high school years: “Don’t skip punctuation! If main clauses and or or are not connected, we separate them with commas. We separate main clauses from subordinate clauses (unless they are special). We usually separate sentences from participles with -on: He was riding a bicycle and admiring nature.We separate the address from the rest of the text: Mother, I explained to you that I am not hungry.

How does Mrs. Karamaleko describe the behavior of many students regarding punctuation? “The full stop and the comma and the colon, so unnecessary to the point of what a mess and uselessness, we’ll get rid of them and be quiet!”.