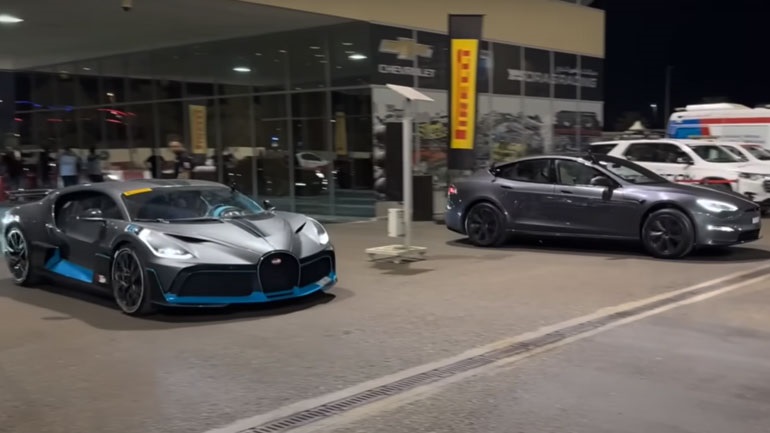 where too; In Dubai, of course, where supercars are traded as mainstream models, the famous Youtuber was found, invited to a special evening of acceleration races. Among the dozens of fast models and the many duels of millions, one pair of vehicles stood out.

The cause of the 400-horsepower race between the €5 million Bugatti Divo and the world’s fastest electric car, the Tesla Blade with 1,020 hp. Great match with excellent times. But who won?

Bugatti Divo: According to the company, the Divo is a road gust, producing up to 1.6 G in corners and capable of intimidating even the most experienced driver with its power. The W16 8.0 quad-turbo engine produces 1,500 horsepower and 1,600 Nm of torque, with the man behind the wheel feeling like he’s being kicked by a horse with every sharp drop of the throttle.

Tesla Model S Plaid: The Tesla Model S Plaid is the fastest accelerating sedan on the planet. It generates 1020 horsepower, achieves 0-100 in just 2.1 seconds, while its top speed exceeds 322 km / h. This particular model costs €5,850,000 less than the Divo.

See also  Can the Fed Tame Inflation Without Further Crushing The Stock Market? What's next for investors?