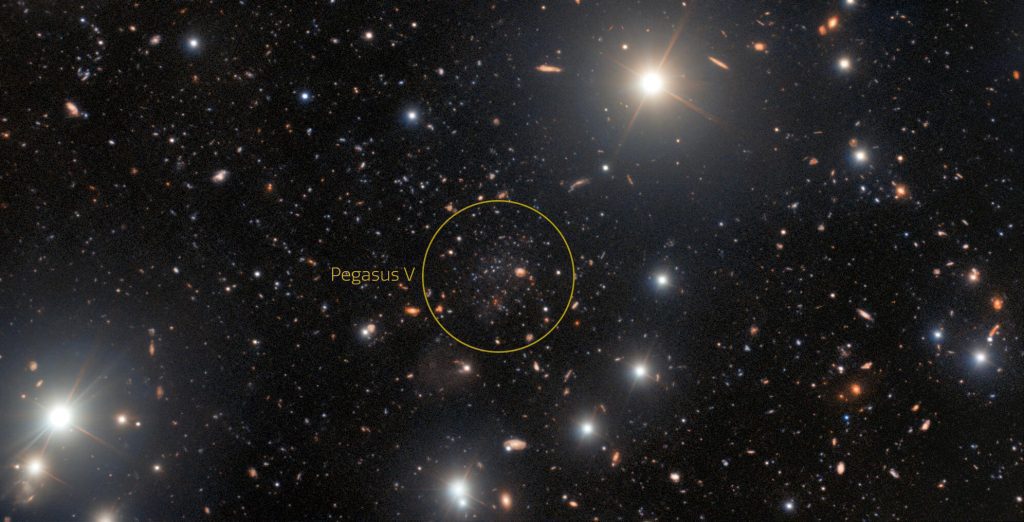 The Gemini North Telescope reveals traces of the oldest galaxies.

An extremely faint dwarf galaxy has been discovered on the outer edges of the Andromeda galaxy thanks to the discerning eyes of an amateur astronomer examining archival data processed by the NSF’s NOIRLab Science and Data Center. The dwarf galaxy – Pegasus V – has been revealed to contain very few heavier elements and is likely to be one of the first fossil galaxies in fFollow-up observations by professional astronomers using the Gemini International Observatory, a program of NSF NOIRLab.

The faint stars in Pegasus V have been detected in a deeper follow-up by astronomers using the larger Gemini North Telescope, 8.1-meter telescope with the GMOS instrument, confirming that it is a very faint dwarf galaxy on the outskirts of the Andromeda Galaxy. The Gemini North in Hawaii is half of the Gemini International Observatory.

Observations with Gemini showed that the galaxy appears to be extremely deficient in heavier elements compared to similar dwarf galaxies, which means it is very old and likely one of the first fossil galaxies in the universe.

“We found a very faint galaxy whose stars formed very early in the history of the universe,” commented Michelle Collins, an astronomer at the University of Surrey, UK and lead author of the paper announcing the discovery. “This discovery represents the first time that a galaxy with this faint light has been found around the Andromeda galaxy using an astronomical survey that was not specifically designed for this task.”

An extremely faint dwarf galaxy has been discovered in the outer fringes of the Andromeda Galaxy thanks to the sharp eyes of an amateur astronomer examining archival data from the US Department of Energy’s Dark Energy Camera on the Víctor M. Blanco 4-meter Telescope at the Cerro Tololo Inter-American Observatory (CTIO) and processed by the Community and Data Science Center (CSDC). Follow-up by professional astronomers using the Gemini International Observatory has revealed that the dwarf galaxy – Pegasus V – contains very few heavier elements and is likely to be a fossil of the first galaxies. All three facilities involved are NSF’s NOIRLab programs. Credit: Gemini International Observatory/NOIRLab/NSF/AURA, Acknowledgment: Image Processing: TA Rector (University of Alaska Anchorage/NSF’s NOIRLab), M. Zamani (NSF’s NOIRLab) and D. de Martin (NSF’s NOIRLab)

Dim galaxies are among the fossils of the first galaxies that formed, and these galactic remnants contain clues about the formation of the first stars. While astronomers speculate that the universe is teeming with faint galaxies like Pegasus V,[2] They haven’t yet discovered nearly what their theories predict. If there are really fewer faint galaxies than expected, this means that there is a serious problem with astronomers understanding cosmology and dark matter.

“The problem with these very faint galaxies is that they contain so few bright stars that we normally use them to identify and measure their distances,” explained Emily Charles, a PhD student at the University of Surrey who was also involved in the study. . “Gemini’s 8.1-meter mirror allowed us to find faint old stars, enabling us to measure the distance to Pegasus V and determine that the number of stars there is very old.”

The strong concentration of ancient stars the team found in Pegasus V indicates that the object is likely a fossil of the first galaxies. When compared to other fainter galaxies around Andromeda, Pegasus V appears uniquely old and lacking in minerals, indicating that its star formation actually stopped very early.

“We hope that further study of Pegasus V’s chemical properties will provide clues to the early periods of star formation in the universe,” Collins concluded. “This tiny fossil galaxy from the early universe may help us understand how galaxies formed, and whether our understanding of dark matter is correct.”

“The publicly available Gemini North telescope provides a range of capabilities for community astronomers,” said Martin Steele, Gemini Program Officer at the National Science Foundation. “In this case, Gemini supported this international team to confirm the existence of the dwarf galaxy, physically linking it to the Andromeda galaxy, and identifying the mineral-deficient nature of its sophisticated star clusters.”

Upcoming astronomical facilities are set to shed more light on faint galaxies. Pegasus V witnessed a time in the history of the universe known as reionization, and other objects dating back to this time will soon be observed. NASA’s James Webb Space Telescope. Astronomers also hope to discover other faint galaxies in the future using the Vera C. Rubin Observatory, a program of NSF NOIRLab. The Rubin Observatory will conduct an unprecedented, ten-year survey of the optical sky called the Legacy of Space and Time (LSST) survey.

This research was presented in a paper titled “Pegasus V – a newly discovered ultra-light dwarf galaxy in the outskirts of Andromeda” to appear in Monthly Notices of the Royal Astronomical Society.