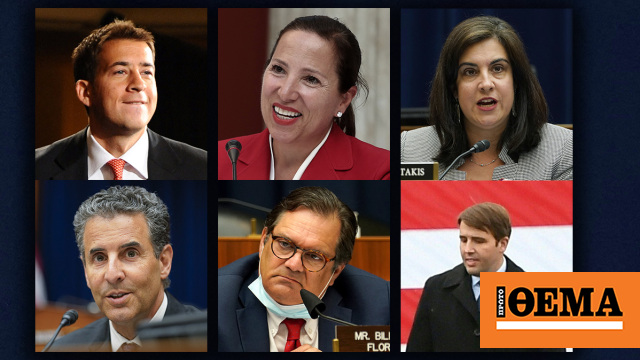 Lieutenant Governor of California, Eleni Kounalaki The last one is A long list of re-elected Greek-Americans In yesterday’s US midterm elections, Greece was leading the new Congress will be increasingDespite the bitter electoral battle, even in the traditional strongholds of both parties.

“Teaching” Election Strategy, Greek-American Immigrants He supported his candidates in every way In yesterday’s elections, they demonstrated a strong stamp and a unique political presence in their local states, and as a result they were re-elected, in a never-ending battle, which was actually decided in the thread.

The dance for the re-election of MPs and senators of Greek descent opened at 5am Greek time yesterday. Nicole Malliotakis, one of the first women to be re-elected. New York is the only Greek-American Republican congresswoman to represent New York in the United States Congress. He won after a hard-fought battle against former Democrat Rep. Max Ross. Indeed, Albany Democrats sought to unseat him by adding liberal areas of Brooklyn — including Park Slope — to his conservative, majority-majority district on Staten Island, the 11th District.

One of the youngest members of the US House of Representatives, but one of the most militant Greek-Americans in Congress in support of Greek positions, Chris Pappas It was cut yesterday Thread once againDefeated Republican candidate Carolyn Levitt in New Hampshire’s 1st District.

Democratic Greek-American congressman Chris Pappas, the child of Greek immigrants and a Harvard graduate, gravitated toward a New Hampshire restaurant. Introduced an amendment to sell and modernize US F-16s to Turkeyfoiling any of Ankara’s plans.

Pappas, in his first statement since his election, thanked New Hampshire citizens for sending a clear message that they “want leaders in Congress.” They can use common knowledge and work together towards a common goal».

Further strengthening of Greece’s presence in the new US Congress is signaled by re-election in Florida’s 12th district. Gus PhilirakisLike 97% of precincts, Mr. Trump won by a substantial margin over Democrat Kimberly Walker.

Additionally, a new term for the 3rd District of Maryland was achieved by Greek-Americans. John SarbanisMaintaining a margin of more than 10 percentage points for the longest period of the count, with the end result of him comfortably dominating Euripsey Morgan.

In addition to Greek-Americans, the circle of Greek influence in Congress is expanding from the fraternity of members of parliament to Greek positions, as for the first time in the House of Representatives Robert Menendez JrRobert Menendez, son of a well-known Philhellenic senator and chairman of the Senate Foreign Relations Committee, won comfortably in New Jersey’s 8th District against Republican Marcos Arroyo, the seat where he began his career in the United States. The political scene is my father.

In addition, the re-election of the Democratic Party spread smiles in Greece and Cyprus Frank BallonA New Jersey congressman has repeatedly accused the Turkish president of threatening Greece, calling for the US to block the sale of F-16s to Turkey.

His election promises hope for the future for a large part of the Greek-American community in the United States Alexis Giannoulia As Secretary of the Interior in Illinois, he previously served as Secretary of the Treasury with Democrats.

Instead, all possibilities remain open regarding the longtime member of Congress from the 1st District. Tina TitusHe’s leading Republican challenger Mark Robertson with 63% of the vote, but the tally continues.

A 28-year-old man is in jail after he was accused of blindfolding a 4-year-old boy in Agrinio.