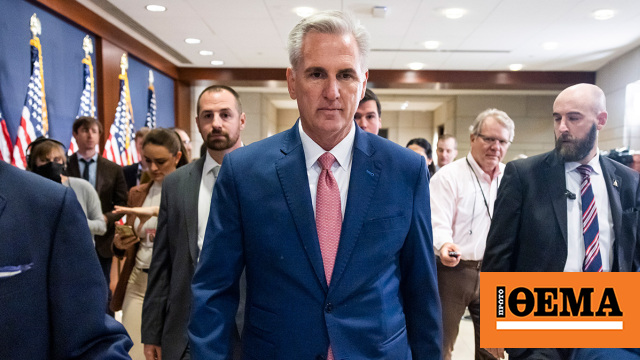 The Republican Party is facing an insurrection with broader political consequences United States of Americawhich found itself in the politically unpleasant position of being unable to elect a president on the first ballot in Parliament to succeed her Nancy Pelosi.

the Kevin McCarthy Receive 203 votes While 218 votes were needed – albeit marginal – in the election. That means roughly 20 Republicans did not vote for McCarthy, which did not win over Trump-leaning lawmakers who see him as condescending. “Kevin doesn’t believe in anything, he has no ideology,” Matt Getz, a “rebel” from Florida, said about his party’s candidate.

Although he was a candidate for formal reasons, Mr Hakeem Jeffries Of the Democrats, the KO leader in the body managed to collect more votes, without gaining a majority. Jeffreys was 212 votes.

The Republican got ten votes Andy Biggs From Arizona, a congressman chosen by the Republican rebels. Nine other deputies did not vote for the presidency.

The problem now is also institutional: without a president, Parliament cannot meet and will need to vote in order to be elected.


McCarthy’s failure was predetermined before the list was even halfway finished. The Guardian reported that the Republicans who did not vote in the letter “G” were actually seven. McCarthy himself, of course, voted for himself, but he got embarrassed and screamed in the flesh.

Pelosi’s treatment was very different, as she voted for Hakeem Jeffries to applause.

The Commission met today, Tuesday, for the first time, with the new formation that resulted from the mid-term elections last year, with Noeembryo. After the procedures, the new president is elected by open roll call.

See also  European Parliament: On Wednesday the election of an alternative to Eva Kaili

He needs 218 votes for a majority (or less if there is no quorum in the body) and if he doesn’t get it the first time, the election is re-elected as many times as necessary. In practice, this happens very rarely. 1923 was the last time multiple votes were needed to elect a president, while in 1856 the body voted no fewer than 133 times in two months!

In the background, there is also a second option for the Republicans, namely Steve Scales from Louisiana, who, while ready for the scenario of being that nominee, maintains that he will not do so unless McCarthy withdraws from the nomination.

Annoyance of a “weak boss”

A number of Republican members of Parliament (five initially) publicly resented the possibility of McCarthy being elected, although he tried in several ways—mainly through significant concessions and retreats—to overcome any internal party backlash.

Most of the “dissidents” coming from the right wing of the party believe that his election to the presidency will be a continuation of the line that he has represented over the past seven years as head of the Republican faction that they see. Moderate.

That is why most analysts described the opposition within the bloc as “well established”, emphasizing McCarthy on the outcome of the vote, as it is difficult to dissuade the objections of the hard-line wing of his party. Especially when it’s a file “Red Wave”That is, the Republicans’ landslide victory in the recent midterm elections remained on paper, which weakened their victory in the elections Parliament. Even if Kevin McCarthy succeeds in getting elected Speaker of the House, the scale of the concessions he has already made is such that they want him to be “a diminished figure under the auspices of a powerful right wing,” according to The New York Times.

Despite the celebratory atmosphere, after frantic deliberations and teleconferences over the weekend, Kevin McCarthy released a “road map” of rules and concessions to the new majority, only for nine Republicans to appear dissenting with the new majority in a speech last Sunday night. His candidacy, without excluding the “dissenters”, eventually reached twelve.

Faced with the possibility of a “short circuit” in the election, Democrats seem reluctant on principle to give a vote of forgiveness to the Republican leader, with instructions they have received that they want every member to vote for any option other than McCarthy’s. Although, in fact, no potential challenger to the Republican leader has emerged, if the elections continue without a result, it is likely that a new candidate from the same camp will emerge, making the process exciting, with rumors raging in his favour. Steve ScalesMcCarthy’s deputy, although he himself openly sided with the faction leader.

However, if they have to rely on Democratic votes to elect the Speaker of the House, Republicans will likely be forced to make new concessions, softening the tone on the Biden administration’s policy toward Ukraine and China.

With negotiations raging within the Republican Party, if more time is needed, the House could move to postpone the recount (held in name for its 435 members) to another date and time in order to sort out the backrooms for any trade-offs and concessions, though. As the reference indicates CNNnone Plan BIn the event that McCarthy was not elected from the Republicans.

Feria – The description of the policeman who found the child chilling: ‘He was floating in the water face down, and he had marks’

Patras: The Prosecutor intervened in the Rome fire – an urgent preliminary examination was ordered

Fraud Institute: they “ate” 515,000 euros from a police officer for allegedly treating vitiligo