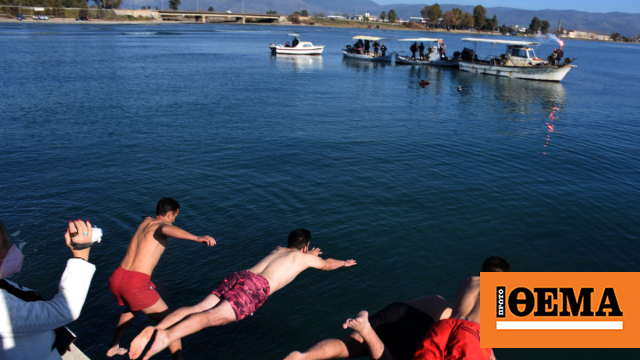 It will be done with spring temperatures Today Consecration of the waters, with Cairo To be the “companion” of those who decide to drown in order to take hold of the cross. According to the latest estimate, three days Lights The weather will remain clear with few clouds, lots of sunshine and thermometers at 17 to 19 degrees Celsius, but from next week temperatures are likely to return to physiological levels for the season.

A change in the weather scenario is expected from the beginning of the new week and especially on Tuesday, we will remember that we are in the heart of winter. The main features are drop in temperature, rain almost all over the country and snow in the mountains.

Sunshine is expected with only local clouds at intervals. Visibility will remain low locally through the morning and through the end of the twenty-four hours. Temperatures range from -3 to 11 degrees Celsius in Western Macedonia, 1 to 15 in the rest of Macedonia and Thrace, 1 to 17 in Thessaly, 0 to 15 in Epirus, 1 to 18 in Styria, 1 to 17 in the Peloponnese, 5 to 15 in the Ionian Islands. , 3 to 15 in the North Aegean Islands, 5 to 16 in the East Aegean Islands, 9 to 16 in the Cyclades, 12 to 17 in the Dodecanese and 4 to 19 °C in Crete.

Macedonia, Thrace
Weather: Generally clear with some clouds temporarily increasing in the mornings in Eastern Macedonia and Thrace. During morning hours, visibility will be low locally and fog will develop at places.
Wind: Northwesterly 3 to 4 and temporarily 5 to 6 Beaufort in central Macedonia.
Temperature: 02 to 16 degrees Celsius. 3 to 4 degrees lower in western Macedonia.

Ionian Islands, Epirus, Western Mainland, Western Peloponnese
Weather: Generally clear with a few intermittently increasing clouds. A chance of local showers in the Ionian. During morning hours, visibility will be low locally and fog will develop at places.

Winds: Variable 3 to 4 and 5 Beaufort locally in the Ionian Northwest.
Temperature: 07 to 18 degrees Celsius. In the interior of Epirus it is 3 to 5 degrees lower.

Thessaly, Eastern Continent, Eastern Peloponnese
Weather: Mostly sunny with some clouds. During morning hours, visibility will be low locally and fog will develop at places.
Winds: Variable 3 to 4 and temporary Sporades Northwest 5 at Beaufort.

Temperature: 03 to 19 degrees Celsius. 2 to 3 degrees lower in Thessaly.

Forecast for Saturday 07-01-2023
Mostly clear with some clouds, possible light localized rain in the Sporades and Evia. Locally limited visibility during morning and evening over continental areas.
West variable wind 2 to 4, east northeast wind 4 Beaufort and temporary 5 Beaufort.
Temperatures range from 13 to 15 degrees Celsius in the north, 16 to 17 degrees Celsius in other parts, and 18 degrees Celsius in the south.

Forecast for Sunday 08-01-2023
Generally sunny with some occasional increasing clouds in the west and south. There is a chance of light rain in the west. Local visibility is low during morning and evening hours.
Winds will be Ionian variable 2 to 4 Beaufort and northeasterly 4 Beaufort in other seas.
Temperatures remain at the same level as Saturday.

Forecast for Monday 09-01-2023
Local clouds from the afternoon and west will increase over all continental areas.
West Greece will start to rain in the afternoon
Storms are also possible in the northwest.
Southwesterly winds up to 4 Beaufort, strengthening to 6 Beaufort in the afternoon in the Ionian Sea.
Temperatures will drop mainly in the west.

Forecast for Tuesday 10-01-2023
Rains and storms, may be strong in some places, initially in the west and gradually in other parts of the country. Snow falls on the northern mountains. A gradual advance from western and western Greece.
Southwest wind 5 to 6 Beaufort increasing by noon to 7 and locally 8 Beaufort. From the afternoon in the Ionian Sea they will turn in a northwesterly direction with the same intensity.
Temperatures are dropping across the country.

Outlook Wednesday 11-01-2023
In western Greece, local clouds. Clouds increased in other parts of the country with rain and storms mainly in the Aegean region.
Winds will be northwest, 6 to 7 Beaufort and locally 8 Beaufort, gradually weakening from noon.

The House of Representatives is without a Speaker: McCarthy loses the 11th vote

See also  US Midterm Elections: "Lessons" in Election Strategy from the Diaspora