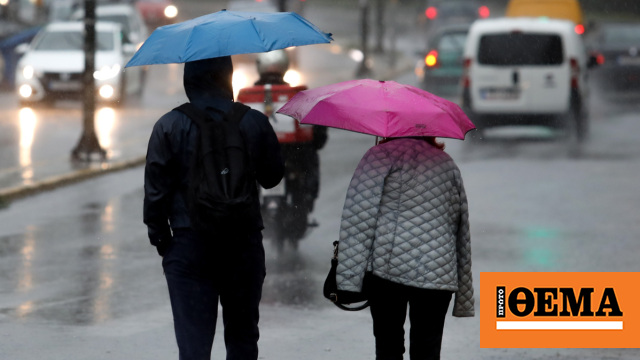 Orbital mini Bad weather It moves into most of the country from Monday night into Wednesday, with storms, gale-force winds, hail and snow in the mountains being the main features.

Rain and storms are expected in Attica province and Athens on Tuesday.

Earlier, the National Weather Service released Emergency bulletin for inclement weather. It said heavy rain and storms will occur in the northern Ionian Sea and Epirus in the evening. 8 Beaufort’s brisk southwesterly winds prevail over the Ionian.

Tomorrow is Tuesday (10/1), heavy rain and storms are forecast for Thrace, eastern Macedonia and the northern islands during the morning hours in Epirus, through the afternoon in the Ionian, western Styria and western Peloponnese, and in the mid-to-evening hours. and in the eastern Aegean and Dodecanese from noon. Strong effects in the mid-afternoon will temporarily affect the Cyclades and Crete. Strong storm westerly winds 8 in the Ionian and south-westerly winds of intensity 8 locally 9 Beaufort prevails in the Aegean. Snow falls in the higher parts of the country.

On Wednesday (10/1), heavy rain and storms are forecast for the Dodecanese, gradually weakening from midday. A brisk northwesterly wind of 8 Beaufort prevails in the Ionian.

a) Northern Ionian and Epirus will experience heavy rains and storms.

b) A gale-force south-westerly wind of intensity 8 Beaufort prevails in the Ionian.

a) Heavy rain and storms are forecast in Epirus in the morning, Ionian, Western Styria and Western Peloponnese until afternoon, Thrace, Eastern Macedonia and Northern and Eastern Aegean islands and islands from afternoon to evening. From noon in the Dodecanese. Strong effects in the mid-afternoon will temporarily affect the Cyclades and Crete.

b) Westerly winds with storm intensity 8 Beaufort intensity prevailing in the Ionian and southwest southwest winds 8 inland 9 Beaufort in the Aegean.
c) Snow falls in the higher parts of the land.

C. Wednesday (10-01-2023)
A) Heavy rain and storms are forecast for the Dodecanese, gradually weakening from noon onwards.

b) Gusty northwesterly winds of intensity 8 Beaufort prevail in the Ionian.

Recommendations for citizens to be especially careful and take steps to protect themselves from emerging risks Occurrence of severe weather events Addressed the Chief Secretariat Civil Defense In view of his temporary deterioration from this evening (09-01-2023) to Wednesday noon.

* To protect items that may be damaged or injured if transported by severe weather.

* Ensuring that house drains and downspouts are unclogged and working properly.

* Avoid crossing streams and creeks on foot or by vehicle during storms and rain, but for a few hours after their occurrence.

* Take shelter immediately during a hailstorm. Take shelter in a building or car and do not leave a safe area until they are sure the storm has passed. Hail is also very dangerous for animals.

* Avoid going under large trees, under posted signs and generally where light objects (eg pots, broken glass, etc.) can break off and fall to the ground (eg under balconies).

If you are at home

* Do not hold electrical appliances or telephone as lightning can pass through electrical wires. Disconnect TV sets from antenna and power supply.

* Avoid touching plumbing pipes (kitchen, bathroom) as they are good conductors of electricity.

If you are in a car

* Keep away from roadsides and trees that fall on it.

* Stay inside until the storm passes and turn on the stop warning lights (emergency lights).

* Close windows and do not touch metal objects.

If you are outside

* Take shelter in a building or car or sit on the ground immediately without lying down.

* If you are in the woods, take cover under the sturdy branches of low trees.

* Do not take shelter under a tall tree in the open.

* Do not stand near power poles, power lines, telephone lines and fences.

* Stay away from rivers, lakes or other bodies of water.

* If you are in the ocean, get out immediately.

See also  Shooting of 16-year-old: New round of incidents in Thessaloniki

* If you are isolated on a flat surface and feel your hair stand on end (signaling that lightning is about to strike), drop the metal objects and sit with your head deep between your legs (lower body surface and contact with the ground). you have

Directorate General of Civil Defense (www.civilprotection.gr) of the Ministry of Climate Crisis and Civil Protection, has provided information to the competent government agencies involved in the service, as well as to the regions and municipalities of the country. Effects of extreme weather events.

At the same time, an action plan is implemented to deal with the risks Floods and associated eventsAt the same time the Fire services Areas where incidents are expected to occur are placed on heightened alert and escalated if necessary to deal with any problems immediately.

For information and updates on current status Traversability of the road network Citizens can visit the ELAS website as floodwaters come in www.astynomia.gr.

For more information and protection measures from severe weather, citizens can visit the website at the email address of the Secretariat of Civil Defense. www.civilprotection.gr.

Citizens can be updated daily about the development of abnormal weather phenomena through EMY’s regular weather reports and electronic address on EMY’s website. www.emy.gr.


As meteorologist Clearkos Marousakis points out, Until the end of January Temperatures won’t be particularly cold, but there will only be a few cold snaps.

However, he notes that February can be very cold.

«Bad weather in front of the gate

After several days of summer, a depression from Central Europe will try to remind us of something from late autumn in our country, causing short bad weather with the main characteristics of rain – storms and strong winds in our seas.

There will also be snow from the mountains of the central and northern mainland. We had to reach the middle of January to remember something about the bad weather in our country.

At this point I recall our long-term assessment presented on our TV show #OPENnews from early December. . A few days later we predicted mild – spring weather until Epiphany following our new assessment, and here we were also vindicated.

Trend till end of month

The long-term models we run at our station do not produce any significant winter views until the end of the month. This situation is due to the strong movement of depressions in the North Atlantic Ocean and is clearly linked to the extreme-extreme weather conditions that North America has been experiencing recently. This flow of planetary Rossby tides prevents the Azores from lifting the atmospheric mountain to higher latitudes, which in turn pushes the polar winds further south. All this flow prevents Siberia’s atmospheric mountain from moving further west and south. Therefore, until the end of the month we should not expect significant and particularly prolonged cold. We can see some “fireballs” of cold, but they don’t make an organized winter scene.

The development we described above could lead to a deep winter in February, but we still don’t have enough data to do a deeper analysis.

This strong westerly flow or zonal circulation will at some point end or weaken enough to allow atmospheric ridges to move further north to reduce cooling. It may seem far off to emerge as an estimate, but we should be prepared for such things as experience takes us there.

Below is a color chart showing the approximate precipitation expected Monday afternoon through Wednesday evening. The darker the colors, the more serious consequences are predicted.

Happy birthday to those who celebrate!»

Philippides: They knew I wasn’t a rapist and they wanted to throw me out of the theater

Pierrakakis: The new DYPA digital card is available at gov.gr

Ilya: Tragedy for a 15-year-old boy – his sisters went to wake him up at school and he died.