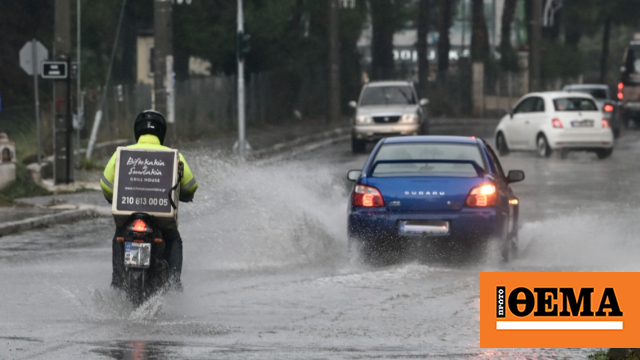 New intensity Weather expected Today From the west with rain and storms. Events gradually expanding in western and northeastern parts of the country Strong in places.

The bad weather affecting our country since yesterday is associated with two depressions, one in Italy and one in the Balkans, whose centers were about 1,100 kilometers apart on Friday afternoon, as shown in a satellite image provided by the European weather satellite Meteosat-11. . Friday’s events in Greece were mainly due to low levels in the Balkans, while events in the west from Friday night and later in other parts of the country were mainly due to low levels in Italy.

As stated therein Latest forecast data from the National Observatory of Athens / meteo.gr, Saturday rain and scattered storms will occur until morning mainly in western parts of Macedonia and Thessaly, Epirus, Styria, Peloponnese in the Aegean, Ionian and Crete. After that, the events will spread to other parts of the country, and after the afternoon they will be mainly in Thrace, Central and Eastern Macedonia, Epirus, Styria, Peloponnese, Aegean and Crete.

There is a chance of hail mainly in the Ionian and western continental areas until the morning, and in the eastern continental, eastern Peloponnese and northern Aegean areas from the afternoon. Snowfall is expected in the western parts of Pindos, Western Macedonia and Central Macedonia, while in Epirus and Western Macedonia above 600-700 meters it will snow until the morning. Significant rainfall is again expected in Epirus, which has seen heavy rainfall in recent days.

According to the Rainfall Episode (RPI) classification implemented by the Meteo Unit of the National Observatory of Athens, the rainfall episode is classified as category 2 (moderate). About two major urban centers: In Attica, it rains in the morning and afternoon. Also, there is a chance of hail while the storm moves in after noon At the end of twenty-four hours. In Thessaloniki province, it rains from morning to afternoon.

Strengthened they will be South to southwest wind In seas with intensity reaching 6-7 Beaufort. Relatively high temperatures during the season reach 15–17°C, except in Crete and the Dodecanese, where it reaches 17–20°C.

2. Snowfalls At lower altitudes (typical altitude 800-1000 meters) it is represented in the continental highlands and Epirus, western Styria and western Macedonia regions.

A. Thrace and the East Aegean Islands from early Sunday morning to late afternoon
B. From Sunday afternoon in the Ionian Islands, Epirus, Western Styria and Western Peloponnese.

2. Snow falls in the continental hills.

A. until evening in the Ionian Islands, Epirus, western Styria and western Peloponnese
B. Macedonia and Thrace from noon and the East Aegean islands from evening.

2. Snow falls at lower elevations (typical elevation 800 meters) in the continental highlands and the highlands of Epirus and western Macedonia.

According to meteorologists, a cold invasion is expected next week, with extreme cold and snow even at lower altitudes. Extreme events will start from the northeast from January 25, causing a severe wintry scene.

Cloud cover is expected over the western parts of the country, while other parts will see occasional clouds. Epirus, Western Macedonia, Styria and Peloponnese and Aegean regions will experience rain and occasional storms until the afternoon, then events will be mainly in Thrace, Central and Eastern Macedonia, Thessaly, Eastern Styria, Peloponnese, Northern Aegean and Crete. There is a chance of hail mainly over the Ionian and western mainland until the morning, and from the afternoon over the eastern mainland and Peloponnese and the northern Aegean. Snow will also occur in the Pintos Mountains, western parts of Western Macedonia and Central Macedonia, and lower elevations in Epirus and Western Macedonia. The southern parts of the country will experience increased dust concentration and muddy conditions at some places.

Macedonia, Thrace
Weather: Cloudy with local rain and scattered storms initially in western Macedonia and gradually in other areas. Events will be intense from midday in central, eastern Macedonia and Thrace. Snowfall occurs in the mountains and lower elevations (between 800 and 1000 meters) of western Macedonia.
Winds: Southerly 4 to 6 and easterly local 7 Beaufort weakening in the evening.
Temperature: 07 to 15 degrees Celsius. In Western Macedonia it decreased by 3 to 5 degrees.

Ionian Islands, Epirus, Western Mainland, Western Peloponnese
Weather: Cloudy with rain and storm at many places till afternoon. Snowfall occurs in the mountains and lower elevations (800 to 1000 meters altitude) of Epirus and Western Styria.
Winds: West Southwest 6 to 7 and locally 8 Beaufort in the Ionian weakening from noon.
Temperature: 09 to 16 degrees Celsius. In the interior of Epirus it is 4 to 5 degrees lower.

Thessaloniki
Weather: Cloudy with rain and strong storm at times. Events weaken from evening onwards.
Winds: South 5 to 6 Beaufort will gradually weaken in the evening.
Temperature: 09 to 15 degrees Celsius.

Wind: Southwest 5 to 6 and temporarily weakening to 7 Beaufort in the evening.

Forecast for Sunday 01-22-2023
Temporarily increased clouds with local showers and storms will remain strong inland over Thrace and the East Aegean Islands until the afternoon. From the afternoon, events in the west will intensify again and will be stronger over the Ionian Islands, Western Styria and Western Peloponnese. Snow falls in the continental highlands.
Winds will be 3 to 5 Beaufort from the South, and 6 Beaufort in the afternoon in the Ionian.
The temperature will drop slightly in the north. 8 to 11 degrees Celsius in the northwest, 14 to 17 degrees Celsius elsewhere, and 18 to 19 degrees Celsius inland in the South Island nation.

See also  Two U.S. senators have criticized the easing of sanctions on Venezuela

Forecast for Monday 01-23-2023
Temporarily increased clouds with local showers and storms. Effects will be intense in the west until evening, central, eastern Macedonia, Thrace from midday and eastern Aegean until evening. Snow falls at lower elevations (typical elevation 800 meters) in the continental mountains and in the mountains of Epirus and western Macedonia.
Winds will be from southerly 3 to 5 and inland at 6 in Beaufort seas at times.
The temperature does not change significantly. Frost in the morning and evening in the north-west

Forecast for Tuesday 01-24-2023
Temporarily increased clouds with locally strong rain and scattered storms over central, eastern Macedonia, Thrace and the northeastern Aegean. Temporary snowfall will occur mainly in northern hills.
Winds will be westerly 3 to 4 Beaufort, easterly 3 to 5 southerly, and inland the northern Aegean easterly to 6 Beaufort.
The temperature will drop slightly in the north. Frost in the morning and evening in the north-west

Thursday Outlook 01-26-2023
Rain and isolated thunderclouds have increased mainly in the west, center and south. Central and southern mountainous regions will experience snowfall.
Winds will be west southwest at 3 to 5 Beaufort to the west and south. 3 to 5 from the remaining easterlies and 6 Beaufort inland in the northern Aegean.
Temperatures will drop further, mainly in the north. In the north there is frost in the mornings and evenings.