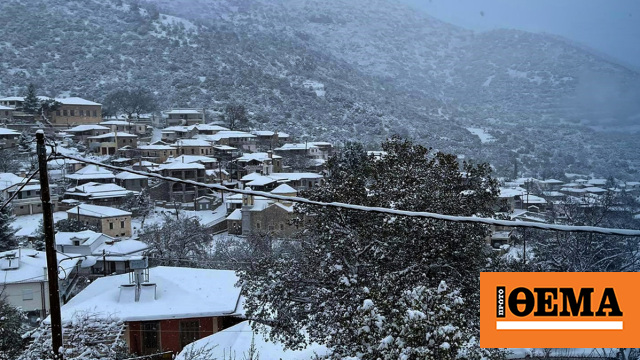 Winter showed its “teeth” late this year. Dense Snowfalls They have started to occur in the north and northeast of the country, while they will continue in the continental highlands.

The first images and videos from the Forecast Weather Greece platform show parts of Greece covered in white. Among them, as can be seen in the footage, is Samarina Grevenen, where the snowfall is intense and the flakes don’t stop falling.


A similar scene exists in Forga of Ionina and in Epirus-West and Central Macedonia. Snow-covered landscape in the mountains of Thessaly.

It is noteworthy that the first wave of bad weather has started in the country with heavy rains in areas like Shanti where the roads turned into rivers and the problems on the roads were severe.

Western Greece was hit by heavy rain and heavy snow in the mountains on Saturday. The table shows the 8 stations of the network of automatic weather stations of the National Observatory of Athens / meteo.gr that recorded the most precipitation until 19:30 on Saturday afternoon.

Earlier, a new emergency bulletin for severe weather was issued by the National Weather Service.

A. From early morning and evening again in eastern Macedonia.
B. until evening in Thrace and midday in the eastern Aegean islands.
c. Afternoon to Ionian Islands, Epirus, Western Styria and Western Peloponnese.
2. Snow falls in the continental hills.

Monday (23-01-2023),
1. Heavy rain and storm forecast:
A. until evening in the Ionian Islands, Epirus, western Styria and western Peloponnese.
B. In eastern Macedonia and early morning in central Macedonia.
2. Snow falls in the continental hills.

Temporarily heavy rain and storms are forecast for central and eastern Macedonia and western Peloponnese from the evening.

Outlook for Tuesday (24-01-23):
Temporarily heavy rains and storms are forecast for central and eastern Macedonia.

Where are anti-skid chains needed in Western Macedonia?

Snowfalls However, in the mountains of Western Macedonia, they do not cause problems with the national network, and in most parts of the province, traffic is carried out normally.

According to the General Regional Police Directorate of Western Macedonia, the traffic of vehicles on Egnatia Otos and the national and other provincial road networks is carried out normally.

Detailed forecast by EMY for next few days

Temporarily increased clouds with localized rain and scattered storms mainly in the northeast and west from the afternoon. Effects will be stronger in Thrace and the eastern Aegean islands until midday, and in Ionia, Epirus, western Styria and western Peloponnese from the afternoon. Snow falls in the continental highlands.
Winds from southerly directions will be 3 to 5 Beaufort, in the northern Aegean in the morning and in the Ionian in the afternoon to 6 Beaufort.
Temperatures will range from 13 to 15 degrees in the north, 15 to 17 degrees in the rest of the country and 18 degrees Celsius at places in the southern island nation.

Macedonia, Thrace
Weather: Clouds with rain and scattered storms in eastern Macedonia and Thrace. In Thrace the impact will remain intense in some places until the afternoon. Some clouds temporarily increased in central Macedonia, with local rain mainly in the evenings and occasional storms at night. A few clouds will gradually increase in western Macedonia and there will be local rain and scattered storms from the afternoon. Snow falls in the evenings, mainly in the mountains of western Macedonia.
Wind: Southeast 3 to 4 and East 5 to Beaufort.
Temperature: 04 to 15 degrees Celsius. In Western Macedonia it decreased by 3 to 5 degrees.

Ionian Islands, Epirus, Western Mainland, Western Peloponnese
Weather: Temporarily increased clouds with localized rain will intensify from afternoon and scattered storms will occur. The impact will be widespread from afternoon onwards. Snow falls mainly in the evenings in the hills.
Winds: South Southwest 3 to 4 Beaufort, gradually changing to Southeast 4 to 5 and returning to Ionian at 6 Beaufort in the afternoon.
Temperature: 06 to 16 degrees Celsius. In the interior of Epirus it is 4 to 5 degrees lower.

Eastern Aegean Islands – Dodecanese
Weather: Cloudy with local rain and scattered storms mainly in the north. Effects will remain in many places in the eastern Aegean islands until the afternoon.
Wind: South 3 to 5 Beaufort, North to 6 Beaufort in the morning.
Temperature: 08 to 18 degrees Celsius.

Thessaloniki
Weather: Some clouds will increase temporarily with localized showers in the evenings, intensifying overnight and occasional thundershowers.
Wind: Variable 2 to 3 and gradually east southeast 4 Beaufort.
Temperature: 06 to 15 degrees Celsius.

Cloudy in the west, central and north with rain and storms with rain and storms strong in the west until the evening, in central and eastern Macedonia from the morning hours and in Thrace until the afternoon. Snowfall will occur in the higher parts of the central and northern parts of the country. In other parts of the country, some clouds increased temporarily with the possibility of weak localized rain.
Winds will be from southerly 3 to 5 and inland at 6 in Beaufort seas at times. The temperature does not change significantly. Temperatures will range from 7 to 10 degrees Celsius in the northwest, 14 to 17 degrees Celsius elsewhere and 18 to 19 degrees Celsius in the southern island nation.
Frost in the morning and evening in the north-west

Clouds will increase temporarily in the West, Central and North and local rain and storms will be temporarily stronger in Central and Eastern Macedonia. Intermittent snowfall will occur in the continental highlands. Northwest weather will improve soon. Elsewhere in the country, a few clouds increased temporarily. West variable 3 to 4 beaufort and northerly winds with similar intensity from noon, easterly 3 to 5 southerly and east northeasterly 6 beaufort in the northeast country. The temperature does not change significantly. Frost in the morning and evening in the north-west.

RHODES: A 44-year-old woman was found dehydrated and exhausted – she had been missing for five days