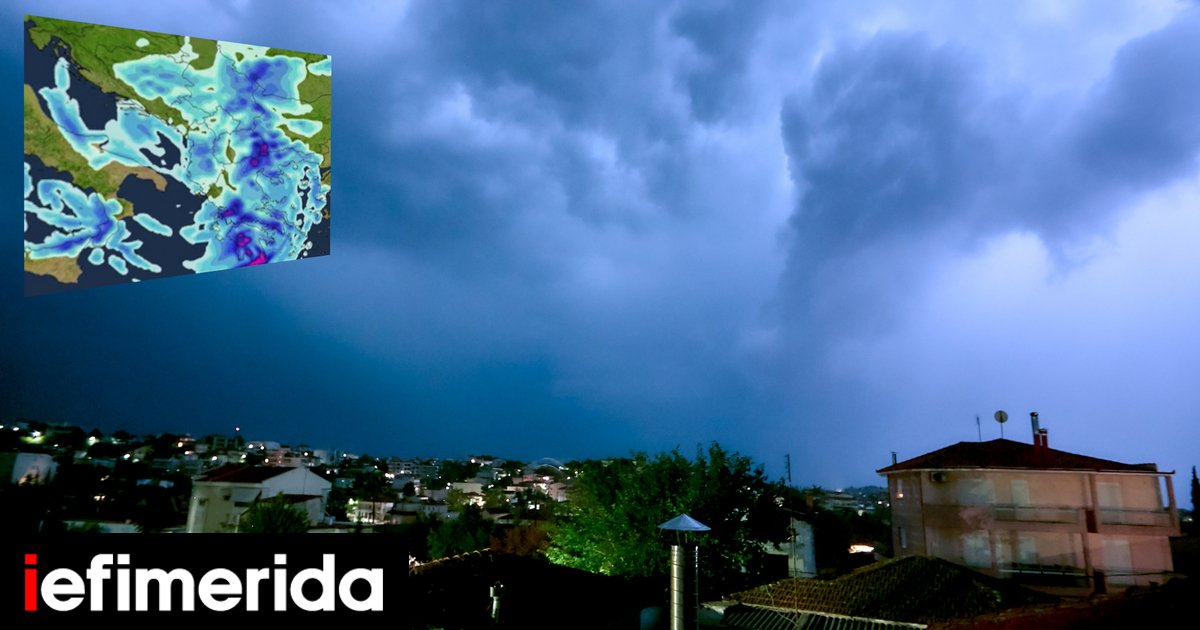 A first taste of winter will be served Weather In the coming days, according to meteorologists, it will present a significant change.

According to meteo.gr of the National Observatory of Athens, The weather will start changing from tomorrow, on Monday, it will rain mainly in western and northern parts of the country. However, bad weather will spread over the next few days.

In more detail, according to meteo.gr, local clouds are expected gradually increasing from the northwest. Rain will initially occur in the Ionian Sea, Epirus, western mainland and central and western Macedonia, gradually intensifying and affecting other parts of Macedonia, Thessaly and the Peloponnese in the evening. Sporadic storms in the Ionian from the afternoon. Visibility will remain low locally through the morning and through the end of the twenty-four hours.

Weather in Attica and Thessaloniki

In Attica, sunshine is expected only with local clouds, which will increase from the afternoon. Winds will initially be up to 3 Beaufort from variable directions, but will change to 2 to 4 Beaufort from the southwest in the morning. Visibility will be locally low till morning. Temperatures in the center of Athens range from 8 to 14 degrees Celsius.

Clouds are expected in Thessaloniki province, while rain is expected towards the end of the twenty-four hour period. Winds will be out of the east at 3 Beaufort, then 2 to 4 Beaufort in the afternoon. Temperatures in the center of Thessaloniki range from 7 to 13 degrees Celsius.

Bad weather to “burn” from Tuesday

According to the EMY, on Tuesday these events will extend to all continental areas, where rain and storms are expected, strong at places, while snowfall will also be recorded.

Forecast for Tuesday 10-01-2023
Rapidly in Ionia, Epirus, Western Macedonia, Western Styria and Thessaly and Western Peloponnese, in all other terrains and gradually in the rest of the island country, clouds with rain and storms are predicted, possibly strong in some places. Snow falls in the mountainous regions of the central and northern continents. At night, the weather will gradually improve over the western and central continents.
Winds in the west will be southwesterly 6 to 8 Beaufort, gradually turning northwesterly with the same intensity strengthening overnight. In the east it will be 6 to 8 southwest, and inland it will be 9 Beaufort, gradually weakening through the afternoon.
Temperatures will drop mainly in the north. It will not exceed 8 to 12°C in the north, 14 to 16°C in the rest of the mainland and 16 to 18°C ​​in the island nation.

Forecast for Wednesday 11-01-2023
Some clouds have temporarily increased in the west, north and east of the island nation, where there will be localized rain and occasional storms in the Aegean. The weather will improve in the west from the afternoon. Snow will fall in the north-eastern hills.
Winds will be northwest 4 to 6 and Ionian 7 and inland 8 Beaufort, gradually weakening through the afternoon.
Temperatures are dropping across the country. In the northern parts of the continent, there is frost in the morning and evening.

Forecast for Thursday 12-01-2023
Clouds temporarily increased over eastern Styria, Evia, eastern Thessaly and the eastern and southern island nation, with local showers and isolated storms mainly in the southeast and gradually progressing from the north. Over the rest of the country, there will be some cloud and localized rain in the evening, gradually thickening from the west.
Winds will be 3 to 5 Beaufort from the east and from the south with similar intensity in the afternoon. In the west they range from 4 to 6 Beaufort north-west, turning south-west to west with the same intensity.
Temperatures do not change significantly, with frost in the mornings and evenings in northern continental areas.

Forecast for Friday 13-01-2023
Temporarily increased clouds with localized showers and storms, mainly over seas. Snow falls on the mountains of the central and northern country. The weather will improve in the west from noon.
Winds will be west and southwest northwest at 6 to 7 Beaufort. The remaining northern addresses are 5 through 7 Beaufort.
Temperatures do not change significantly, with frost in the mornings and evenings in northern continental areas.

Meteorologist Nicos Condares also “sees” climate change. “With the new week, the start of this winter starts with the first bad weather on Tuesday and Wednesday, with heavy rain and localized storms that could cause flooding and gusty southeast winds. Events will slow down on Thursday, then another change will come and it will take over the next day,” he said in his post.

Meteorologist Clearchos Marousakis also posted about the impending change in weather. OPEN’s meteorologist, in a post on Facebook, predicted rain and storms, as well as strong winds, in our country from Monday.

However, as mentioned by the meteorologist, winter will not appear until the end of the month, while he believes that we will get a normal winter scene in February.

«Bad weather in front of the gate

After several days of summer, a depression from Central Europe will try to remind us of something from the advanced autumn in our country, causing short bad weather with the main characteristics of rain – storms and strengthened winds in our seas.

There will also be snow from the mountains of the central and northern mainland. We had to reach the middle of January to remember something about the bad weather in our country.

I recall in this space our long-term assessment from the beginning of December, presented on our TV show #OPENnews, where we talked about a spring Christmas more reminiscent of Easter than Christmas, to various reactions. . Following our latest assessment a few days later we predicted mild – spring weather until Epiphany, and here we were vindicated.

Trend till end of month

The long-term models we run at our station do not produce any significant winter views until the end of the month. This situation is due to the strong movement of depressions in the North Atlantic Ocean and is clearly linked to the extreme-extreme weather conditions that North America has been experiencing recently.

This flow of planetary Rossby tides prevents the Azores atmospheric mountain from rising to high latitudes to bring the polar air further south. All this flow prevents Siberia’s atmospheric mountain from moving further west and south. Therefore, until the end of the month we should not expect significant and particularly prolonged cold. We can see some “fireballs” of cold, but they don’t make an organized winter scene.

Do penguins come after alkyonids?

The development we described above could lead to a deep winter in February, but we still don’t have enough data to do a deeper analysis.

Presumably this strong westerly flow or zonal circulation will at some point end or weaken enough to allow atmospheric ridges to move further north to reduce cooling. It may seem far off to emerge as an estimate, but we should be prepared for such things as experience takes us there.

Below is a color chart showing the approximate precipitation expected Monday afternoon through Wednesday evening. The darker the colors, the more serious consequences are predicted. Happy birthday to those who celebrate!

See also  Maersk is to buy LF Logistics for about $ 3.6 billion