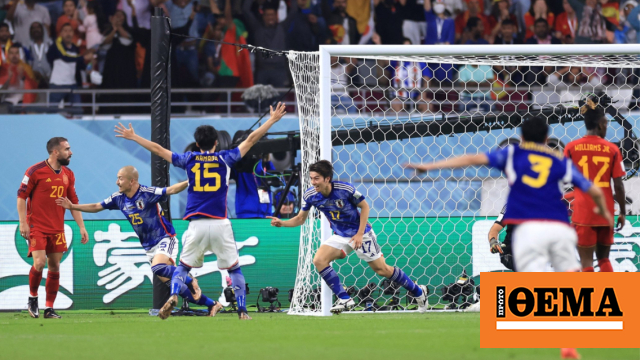 The Japan After his “feat” against Germany, he was also successful against her Spainwhere he won 2-1, again surprisingly and advanced to his number ’16’. Qatar World Cup as the first in the fifth group.

Murata’s goal (11 ‘), his third in the tournament and 30th with the national flag, did not deter the “Samurai”, who found their champions again in the sudden end. Ntwan was substituted at the start of the second half and in the 48th minute he hit the net as he did against the Germans, while in the 53rd minute Tanaka took advantage of Mitoma’s turnover in the sideline and made it 2-1 from contact, with “Furías Rojas” complaining about being sent off and sending the VAR to second place. Japan first.

While the Japanese were in the stands shedding tears of joy, it was Germans… they were drowning in their pain because even though they beat Costa Rica 4-2, they were going to lose in the group stage for the second tournament in a row, this time at the hands of the Japanese. Around the same time that Álvaro Morata opened the scoring with a header for Spain, Gnabry did the same (10′) for Germany. Yelchin Tejeda equalized in the 58th minute for Costa Rica and in the 70th minute Juan Pablo Vargas made it 2-1 with a stunning move. But the joy of the Costa Ricans was spoiled by Kai Havertz with two goals (73 ‘, 85’), while in the 89th minute Velkrug scored the final 4-2.

The Croatian And the Belgium They were tied goalless (0-0) in the third round of the group stage at the Qatar World Cup, with Hrvatska finishing second in Group F and Roberto Martinez’s team eliminated from the tournament. Both teams had good goal chances, with the Red Devils the most in possession and Romelu Lukaku the killer goal.

At the same time Morocco They would celebrate their first group place, first knockout qualifier since 1986 and second in their history with a 2-1 victory over Canada. Zige (4d) and Al-Nusairi (23) scored for the Africans, who also had an own goal in the 41st minute with Ajar.

White House: Biden and Macron have dinner with their wives – Russian war crimes on the ‘list’

Lekkas for Kakia Skala: There is a high probability of a kilometer long rock slide