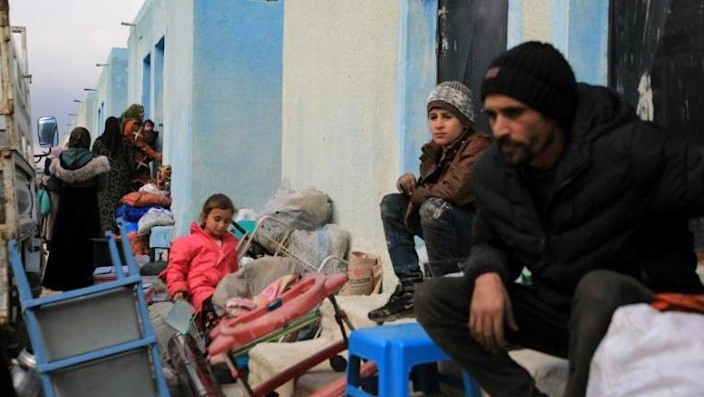 The apartment complex, built near the town of Al-Bab, which has been under the control of Turkish forces and their Syrian aides since 2016, is the latest in a series of housing projects sponsored by Ankara.

Turkish Humanitarian Relief Foundation (IHH), a Turkish NGO, said it has supported the construction of more than 18,000 housing units in northwest Syria since 2019.

The Turkish lira became the main currency, and Turkey also contributed to the establishment of hospitals, post offices and schools to teach the Turkish language.

“More than 50,000 people have moved into the houses we have built so far,” IHH Secretary General Dormus Aydin told AFP.

According to him, by April 100 thousand people will be housed in 24,325 houses built by IHH.

The latest housing complex was completed this month near Al-Baza’a, 3 kilometers east of Al-Bab, with support from Turkey’s State Disaster and Emergency Management Agency (AFAD), according to local officials.

The Al-Bazaa residential complex was built on land managed by a local council “in full cooperation with our Turkish brothers,” according to Hussein Al-Aisel, who oversees the settlement of the displaced families.

“These houses are temporary shelters for our displaced brothers,” adds a local official.

“We want to go home”

While some displaced families are grateful to Turkey, many others have only one goal, to return home and claim that these homes do not make up for what they have lost.

Like Muhammad al-Haj Musa, 38, a father of four, who has been living in camps since the war forced him to leave his town in Idlib five years ago,

For him, life between four concrete walls is only “a little different” than living in a tent.

“We lie to each other,” he says. Because “what we want (is) a (permanent) solution. We want to go home.”

Not far from there, another displaced person, Ahmed Mustafa Katouli, asserts that “these houses do not make up for what we lost,” says this man, who was displaced by the fighting in Aleppo ten years ago.

“We lost homes, lands, martyrs,” but after all the time I spent in tents “I have to live here.”