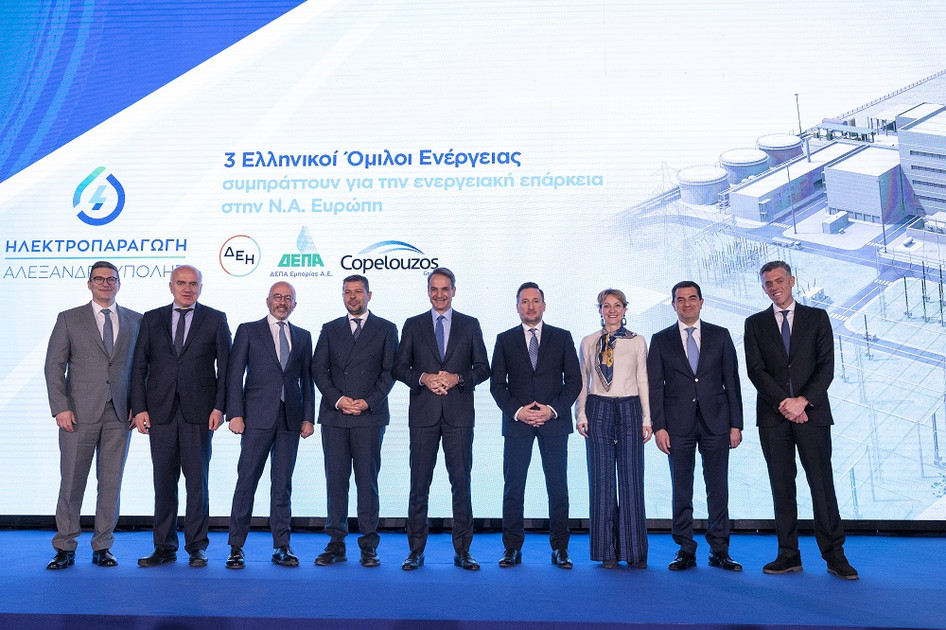 The process of improving Greece’s role as an energy hub in southeastern Europe was marked by today’s ceremony to start the implementation of the “Alexandroupoli Power Plant”, which was held In the presence of Prime Minister Kyriakos Mitsotakiswith the facilities of the Alexandroupoli Port Organization.

The event was attended, among dignitaries, by the Minister of Environment and Energy, Mr. Costas Skrekas who also greeted his Bulgarian counterpart mr. Rosen HristovHis Excellency the Minister of Development and Investment a. Adonis GeorgiadisMinister of National Defense a. Nikos PanagiotopoulosUndersecretary of the Ministry of Development and Investment a. Yannis TsakirisDeputy Minister of the Interior in charge of Macedonia-Thrace issues, Mr. Stavros Calafatis And the Deputy Minister of Foreign Affairs responsible for economic diplomacy and extroversion a. Konstantinos Fragogiannis. The regional governor of Eastern Macedonia and Thrace, Mr. Christus Metheusas well as the Mayor of Alexandroupoli, Mr. Yannis Zambukis.

Government leadership continues to consist of the Deputy Minister rather than the Prime Minister, Mr. Yannis Economouthe master. Yannis BratakosDeputy Minister to the Prime Minister, and Secretary General for International Economic Relations and Communication Ms. Basilica of Loiseau The Secretary General for Energy and Mineral Raw Materials, Ms Alexandra Sdoko.

Moreover, the ceremony was honored with their presence by the President and CEO of ADMIE, Mr. Manousos ManousakisRAE Vice Presidents Dr. Demetrius Psychogeos and mr. Dimitrios VolarisAADE Governor, Mr. George PetsilisNew Democracy Secretary Mr. Pavlos MarinakisAs well as the deputies of the state of Evros a. Anastasios DemoushakisK. Dermantsopoulos ChristosK. Stavros Kylitsis and mrs Natasha Jara Member of Parliament Rhodopes A. ive. Stylianidis. The economic advisor to the US Embassy, ​​A. Eric Holmgren.

In partnership with the country’s three major energy groups, PPC, DEPA Emporias and Damco Energy from the Kopelouzo GroupConstruction of the new electricity production unit, which will use natural gas as fuel, will start immediately in Alexandroupoli. This is a major project that will make a catalytic contribution to energy security in Greece, but also in the wider Balkan region.

The power plant will be directly connected to the Floating Natural Gas Storage and Gasification Unit (FSRU), which is under construction, turning Alexandroupoli into an energy crossroads for the electricity and natural gas grids, with the potential to supply the domestic market as well as neighboring countries.

The construction and operation of the Alexandroupoli power plant will also contribute to achieving the goals of the European Green Agreement and the transition to low-polluting energy production. The equipment installed in the unit is capable of burning hydrogen and can operate with mixed fuels.

The new power plant is expected to be commissioned at the end of 2025. It will be combined cycle and has an installed capacity of 840 MW, which is roughly the net capacity of the three retired lignite units. Due to the highest degree of efficiency, it will ensure the continuous supply of electricity at low price levels.

Stassis: Clean energy is at the core of our strategic planning

Its President and Chief Executive Officer ppcMr. Georgios Stasis said: “The new Alexandroupoli power plant, which we are inaugurating today, is the result of the creative partnership of the PPC Group with two important partners, DEPA Emporias and the Kopelouzo Group, with our goal being to lay another stone in strengthening the country’s role as a power and why not export a productive player in the region.” The widest of Southeast Europe.As is known, clean energy is the core of our strategic planning.

Given that current technologies that provide long-term storage for renewable energy production are either in an experimental stage or are very expensive, natural gas undoubtedly plays an important role. New natural gas units should be as flexible and efficient as possible and eventually have the potential to be part of a zero energy consumption system using clean fuels such as green hydrogen. In this context, our investment in a new combined cycle unit in Alexandroupoli not only deviates from our strategic objectives, but serves for a smoother transition. At the same time, it will not only contribute to the country’s energy adequacy, but also strengthen PPC’s position as a critical energy partner in the broader region of Southeast Europe.”

Papadopoulos: Greece is acquiring another important project that will contribute to the uninterrupted supply of more economical energy

its boss Deepa Trading Mr. Ioannis Papadopoulos said: “Today is an important milestone, both for DEPA Emporias and the large energy groups with whom we have collaborated to carry out the investment, as well as Alexandroupolis, Greece and NA Europe. With the Alexandroupoli power generation unit, Greece acquires another important project from It would contribute to the uninterrupted supply of the most economical energy. At the same time, our country will acquire a new bridge to the transition to green energy, where the combined cycle unit will balance the system, which will allow greater penetration of RES into the energy mix.

Xifaras: We are launching an important project for energy security in Greece

The CEO of DEPA Emporia, Mr. Konstantinos Xifaras, also noted the importance of the project, stressing: “Today we are launching an important project for the energy security of Greece and the wider Balkan region. It uses natural gas to produce electricity, and for us it represents the implementation of the action plan that we prepared and implemented a year ago. 2020, with the aim of transforming DEPA Emporia into an integrated energy company. The power generation unit in Alexandroupolis is a very important part of our business planning, which will allow covering a wide range of activities and ensuring the energy transformation of DEPA Emporias.

its CEO Kopelousou GroupK. Christos Copelozos In that post, he noted:We are here to welcome a project that is changing the energy landscape: Greece is protecting itself, becoming energy sufficent. At the same time, a new energy column for Southeast Europe is being created, from which our country will be able to export electricity to neighboring Balkan countries. towards Bulgaria, North Macedonia and even Serbia.

as a group, We chose to locate the unit here in Alexandroupoli. Besides, for years we have been giving particular importance to the wider Evros region, recognizing its great geo-strategic location and creating infrastructures, which, together with other projects implemented in the region, such as “FSRU Alexandroupolis”, create prospects for the development of the local economy and many New and permanent jobs.

With confidence in Greece and its people in the Kopelouzo Group, we will continue to develop our “National Identity” projects. These include investments that are prepared in a very systematic way, such as the electrical interconnection between Greece and Egypt and offshore wind farms. For a better and more sustainable future.