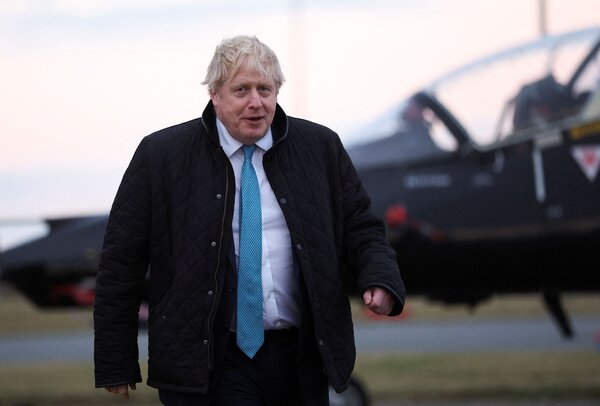 A highly anticipated British government investigation into claims of lockdown-breaking parties in Downing Street was delivered to Prime Minister Boris Johnson on Monday, bringing to a head a scandal that has threatened his political future.

The delivery of the report is a critical moment for Mr. Johnson, who is also the subject of a separate inquiry by the Metropolitan Police into rule breaking at Downing Street during pandemic lockdowns over the past two years and is fighting for his political survival.

Although its findings could inflict further damage on Mr. Johnson, the report was expected to be heavily redacted after the police confirmed last week that they had asked for critical details to be withheld to avoid prejudicing their own inquiry. A spokesperson for Mr. Johnson’s cabinet confirmed that he had received “an update” on the investigation, signaling that much of the report was redacted.

The report is expected to be published later on Monday. Mr. Johnson was studying the report and was expected to make a statement to Parliament in the afternoon.

Still, the details in the report, prepared by a senior civil servant, Sue Gray, could prompt Conservative Party lawmakers to trigger a no-confidence vote that could eject Mr. Johnson from power. That, in turn, raises the extraordinary prospect of the prime minister being forced out a little more than two years after winning a landslide election victory for his party in December 2019.

Since the scandal broke late last year, the Conservative Party’s poll ratings have plummeted as voters reacted furiously to reported breaches of strict coronavirus rules by the people who made them. At the time of some of the gatherings in Downing Street and other government offices, people in England were prevented from holding family gatherings or even saying their final farewells to dying relatives.

Mr. Johnson’s position is also vulnerable because he is accused of lying to Parliament about what he knew, something that is normally considered a resigning matter.

To trigger a no-confidence vote in Mr. Johnson, 54 Conservative members of Parliament must write a formal protest letter to one of their senior colleagues, and the secretive nature of the process means that only a few people will know how many letters have been submitted until the threshold is reached. The prime minister would then need the support of at least half of his own lawmakers to survive a vote.

So far, only a handful of Conservative lawmakers have said publicly that they have written letters demanding a no-confidence motion in Mr. Johnson.

But many Conservative lawmakers appeared to be waiting to see Ms. Gray’s report’s findings before deciding whether to try to bring Mr. Johnson’s eventful premiership to an end.

Initially, Mr. Johnson asked Simon Case, the head of the civil service, to investigate the accusations about the parties that at that stage mainly involved Mr. Johnson’s staff members. But to his embarrassment, Mr. Case had to recuse himself when it emerged that one event had taken place in his office.

Ms. Gray then took over, only to find herself investigating not just the conduct of officials but also of the prime minister.

The crisis worsened on Tuesday for Mr. Johnson when the Metropolitan Police said that based on information Ms. Gray had uncovered and shared with them, it would launch an investigation into parties at Downing Street.

See also  Who will be on 2023 Baseball Hall of Fame ballot? Carlos Beltrn, K-Rod biggest names set to join

The police had long resisted calls for their involvement, despite calls from opposition politicians, so the announcement from Cressida Dick, the London Metropolitan Police commissioner, suggested that serious questions had been raised by Ms. Gray’s inquiry.

But after the police asked for some details to be scrubbed from the report because of their own investigation, critics accused them of making an ill-timed intervention that could allow Mr. Johnson to escape judgment for flouting rules that he had imposed on others.