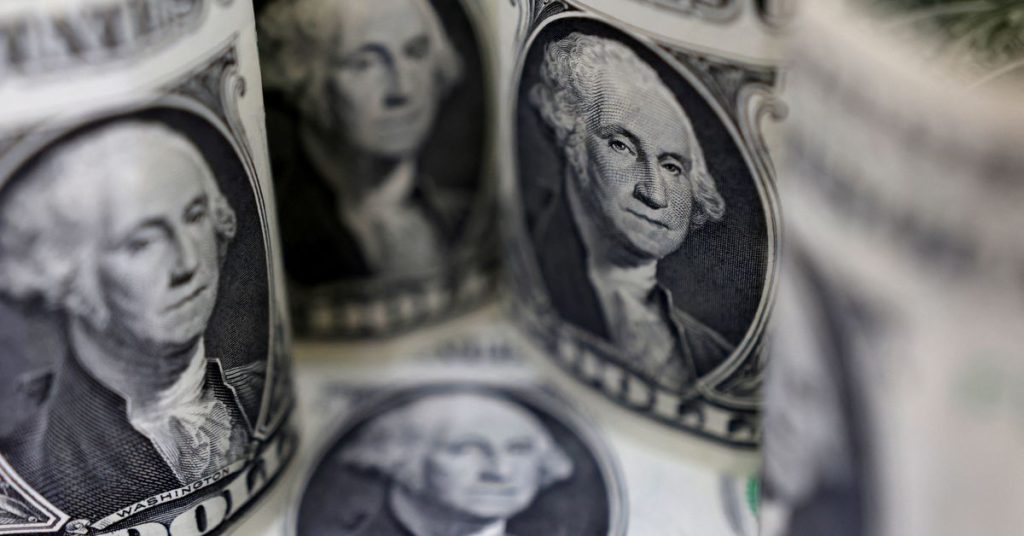 US dollar banknotes are shown in this illustration taken on July 17, 2022. REUTERS / Dado Ruvic / Illustration

LONDON (Reuters) – The U.S. dollar rose to a 20-year high against other major currencies on Monday after Federal Reserve Chairman Jerome Powell signaled that interest rates would remain high for longer to reduce spiraling inflation.

The dollar index, which measures the value of a currency against a basket of peers, rose to a two-decade high of 109.48.

This left its European peers in the doldrums even as hawkish ECB comments boosted expectations of a rate hike in September.

The euro was down a quarter of a percent in early European trade at $0.99415, within sight of a 20-year low, while the British pound sank to a two-and-a-half year low.

London markets were closed for a public holiday.

Powell told the Jackson Hole Central Banking Conference in Wyoming on Friday that the Fed will raise interest rates as high as needed to constrain growth, and keep them there “for some time” to bring down inflation that has reached more than three times Fed rates. 2% target.

“Powell’s comments favored higher rate pricing on the fed funds for a longer period of time,” said Kenneth Brooks, currency analyst at Societe Generale. “The assumption that the Fed will start cutting rates in the middle of 2023 is premature.”

Money markets responded by ramping up bets for a more aggressive Fed rate hike in September, with a 75 basis point hike now likely around 70%.

See also  Electricity bills: Who will get "jumbo" electricity this month?

US Treasury yields rose, with two-year bond yields hitting a 15-year high of around 3.49%, boosting the dollar.

The dollar rose 0.8 percent to 138.81 yen, after reaching its highest level since July 21, while the offshore yuan fell to its lowest level in two years at 6.9321 per dollar.

“I think for this week, (the US dollar index) will track higher until it reaches 110 points, just as market participants continue pricing in more aggressive tightening cycles by major central banks,” said Carol Kong, senior currency associate. Strategy and International Economics at the Commonwealth Bank of Australia.

Even with the probability of the European Central Bank raising interest rates significantly in September, the euro has struggled as the bloc’s energy crisis increases recession risks. Russian state energy giant Gazprom (GAZP.MM) Natural gas supplies to Europe are expected to be halted from August 31 to September 2. read more

In cryptocurrencies, Bitcoin regained some ground but remained below the $20,000 level that fell below the weekend. Read more