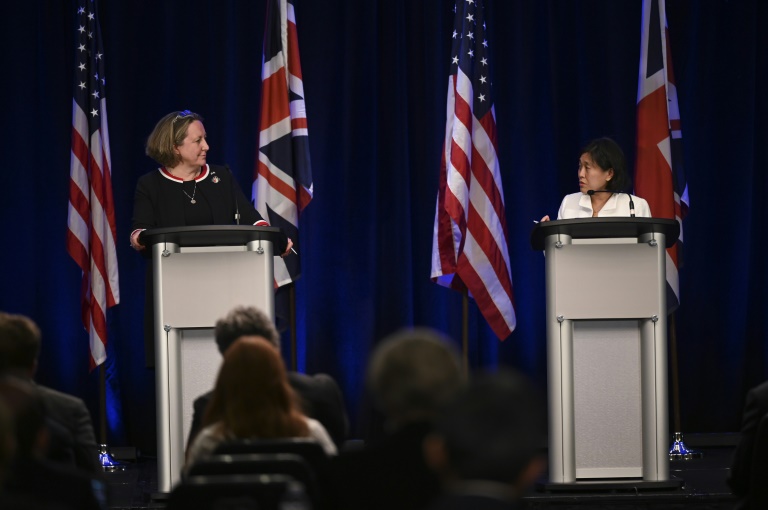 The United States and the United Kingdom succeeded in settling their dispute over steel and aluminum Tuesday, but the Biden administration appears in no hurry to resume negotiations on the free trade agreement desired by the British prime minister.

US Commerce Secretary Gina Raimondo and US Trade Representative Catherine Taye announced Tuesday that they have reached a deal with London to end punitive tariffs on British steel and aluminum imposed by former President Donald Trump in 2018.

“This important agreement will not only help ensure the long-term viability of the steel and aluminum industries, it will protect American jobs, but it will also lift retaliatory tariffs on more than 500 million US exports to the UK, including spirits, various agricultural products and commodities Consumerism,” they commented in a joint statement.

“This is great news and a welcome boost to our steel and aluminum industries,” British Prime Minister Boris Johnson wrote in a tweet.

Concretely, this new agreement will make it possible to import “historic and sustainable quantities of British steel and aluminum products without applying Section 232 tariffs,” US officials explained.

In January, the Americans and British announced the start of negotiations to end this dispute, inherited from the Trump era, and which spoiled relations between the two countries for nearly four years.

The UK was among several countries to impose additional tariffs of 25% on steel and 10% on aluminum in June 2018, in the midst of a trade war.

If the Biden administration did indeed reach agreements with the European Union in October, and then with Japan in early February, then a negotiated solution is long overdue for London.

Hence, this agreement will make it possible to improve relations between the two countries which, shortly after Joe Biden’s accession to the White House, had already settled their other major dispute concerning the support of aircraft manufacturers Boeing and Airbus.

British Minister Anne-Marie Trevelyan said she hoped this agreement would allow us to “move forward” and “focus on deepening our burgeoning trading relationship with the United States”.

However, it pales in comparison to the massive free trade agreement that Boris Johnson wants.

Signing a bilateral treaty with the United States was a priority for the British after Brexit, effective January 1, 2021.

But while the Donald Trump administration (2017-2021) was willing to enter into a bilateral agreement with London and even conducted a series of negotiations, the Biden administration let the process die.

In addition, the United States made any potential agreement conditional on strict compliance with the Northern Ireland Peace Agreement.

On Tuesday, Ms Trevelyan acknowledged that London had been seeking a deal with Washington “for some time” and added that her government had not given up.

The British minister stressed that the challenge is not only to eliminate tariffs, but also to respond to the need to “build a trading relationship in the twenty-first century between two great nations with common values”.

Ms. Tay, for her part, called for “creativity” regarding the tools of the trade, noting that a deal was not on the agenda.

See also  “Land of Light”: “The result is amazing to say the least” by ONMT

Earlier on Tuesday, Marjorie Corlins, vice president for European affairs at the US Chamber of Commerce – the body that advocates for US companies – stressed there was a “shared desire to find ways to improve the relationship”.

But, she said, “I don’t think it will be through the FTA, at least not anytime soon.”

Ms Trevelyan and Ms Tay have announced that they will continue their business dialogue ‘in April, in Scotland’ this time.

“I don’t want to prejudge or predetermine (…) where these conversations will lead us,” Catherine Taye, though, softened.