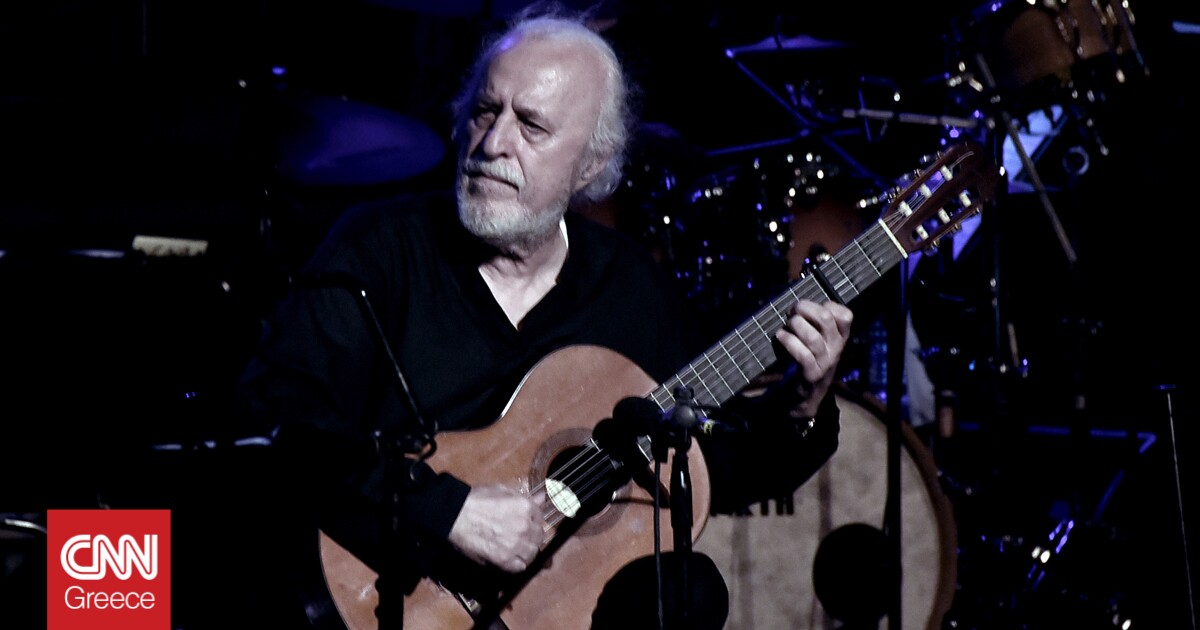 according to Magnisianewsthe hapless artist while coming for vacation at his home in cuckooShortly after eight thirty in the evening, he put a piece of wood on the railing of his backyard and stepped on it, perhaps to fix something, but perhaps he lost his balance or became dizzy and fell into the void.

According to the reference information, the 77-year-old fell from a height of three meters on a stone with his head, resulting in fatal injuries!

His wife, unable to believe what happened, calls him ECAV At 20.45 a mobile unit accompanied by a doctor went to the scene, but the unfortunate composer was covered in blood and had inhaled the last.

His body was taken to Volos Hospital, where doctors pronounced him dead.

“I am fortunate to have settled in Makrinitsa and enjoy everything the place has to offer,” he characteristically said a month ago, speaking to Radio ENA and Ilias Kotsiris, a well-known, famous and beloved composer and guitarist, Notis Mavroudis, who has been spending long periods of his life in the well-known mountain village of Centaurs.

In fact, Mr. Mavrodis also referred to the comments of “Ludovikos of Anogia” on Radio One, who praised the beauty of Pelion and more specifically Makrinitsa, with the musician commenting that “Ludovikos knows very well all these deep meanings, looks and senses, because in addition to being a songwriter He is also a very good painter. When I come to Makrinitsa I feel the aura of the place. I consider myself lucky to have settled there in Makrinitsa and enjoy all that the place has to offer.”

See also  Where will the queen be buried? Why won't the Royal Vault be his last resting place

Who is Notis Mavroudis?

He spent the first two years of his life in prison next to his mother, who was a political prisoner. In 1958, he started guitar lessons at the National Conservatory of Music with teacher Dimitris Faba and received his diploma in 1969 with honors. In 1970 he settled in Italy, where he was appointed chair of classical guitar at the Scuola Ciciva di Milano, where he taught until 1975. In 1970 he also attended the courses of the Academy of Santiago de Compostela in Spain with José Tomás.

In 1975 he settled permanently in Athens and since that year has been teaching classical guitar at the National Conservatory. In 1975, 1977 and 1979 he gave a concert at the Classical Guitar Festival in Esztergom, Hungary. In 1978 he participated in the International Festival of Political Song in East Berlin and in the XI World Youth Festival in Havana, Cuba. As a composer and soloist he has given many concerts in many countries (Greece, Italy, Finland, Switzerland, Germany, Hungary, Austria, Cuba).

As a professor at the National Conservatory of Athens, he had as students many famous artists such as Manolis Androulidakis, Sokratis Malamas, Panagiotis Margaris, Giorgos Melas, Lambros Dosikos, Dimitris Sotiropoulos, etc. Since 1994 he has held the duties of Head of the Department of Literature and Cultural Arts and since 1995 he has held the position of Artistic Director of the Patras International Festival (since 1999 the position has been held by Alexandros Merat).

Notis Mavroudis entered the discography in 1964 with the songs “Akri den hai oi vala” and “Ta yortina sou forese”, with lyrics by Yiannis Kakoulidis and performance by George Zographos. In 1966 he wrote music for theater and cinema.

See also  Nino on the attempt on his life: 'It was very cruel'

Some recordings in his discography:

In 1968 he performed the music of Odysseus Aeletis’s Song of Heroism and Mourning for the Lost Vice-Lieutenant of Albania, a popular oratorio for voice choir and orchestra.
In 1976, an album of Theofilos’ paintings was released with lyrics by Akos Daskalopoulos, inspired by Theofilos’ paintings.

In 1977, he set poems by Manos Hadjidakis to music on the album Child of the Earth.

In 1985, the album Eros anikate mahan se poesis, written by Ilias Petropoulos, was released.
Since 1990 he has written songs for the Children’s Choir, and collaborates with the Dimitris Tebaldo Children’s Choir.

Between 1999-2008, together with his student Panagiotis Margaris, he recorded the award-winning series Cafe de l’art, in which they arranged well-known songs from the Greek and international repertoire for two guitars.

In the same spirit, in 2018 he launched the Café Latino chain with Giorgos Tossikian.
In 2019, IANOS published the work “Agrypno feggari”, Greek poets listening to music from the 19th and 20th centuries.

In 1999, the album Luna Park was released, with the children’s choir of Dimitris Typaldos and the participation of Giorgos Dalaras. In 2002, he composed songs for women’s voices, on the album In Echo of Love, in which such big names as Harris Alexio, Glykeria, Eleftheria Arvanitaki, Elie Paspala participated.

In 2006, together with Elias Katsoulis, they wrote songs that “tell” the stories of great Greek artists (Gr. Bithikotsis, St. Carte Postale album.