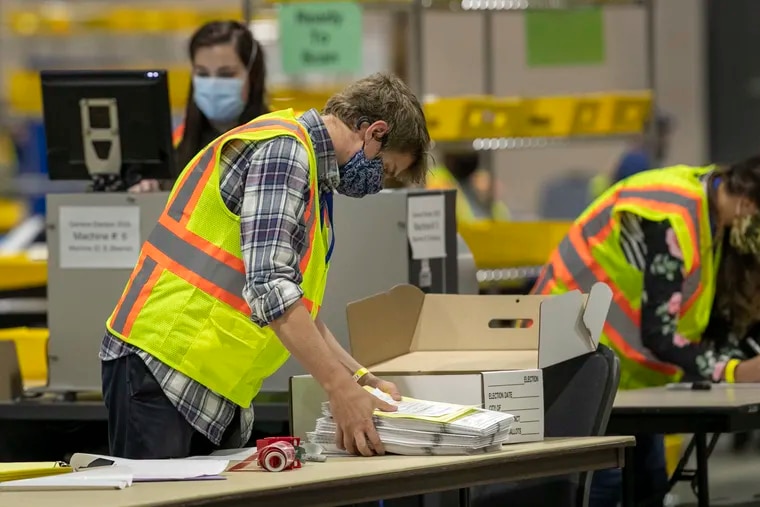 That almost certainly won’t be the final word on the matter, as the state quickly appealed to the Pennsylvania Supreme Court, triggering an automatic stay of the decision and leaving Act 77 in place while the high court considers the case. And Democrats believe the Supreme Court, which has a Democratic majority, will ultimately uphold the law.

Democrats had feared for months that the state’s Commonwealth Court, with its Republican majority, would strike down Act 77.

“This opinion is based on twisted logic and faulty reasoning, and is wrong on the law,” state Attorney General Josh Shapiro, the leading Democratic candidate for governor, said on Twitter. “We are confident that Act 77 will ultimately be upheld as constitutional.”

The ultimate outcome aside, the ruling may add momentum to a GOP push in Harrisburg to enact more restrictive voting laws. Republican candidates for governor celebrated the ruling, and former President Donald Trump issued a statement saying a “great patriotic spirit is developing at a level that nobody thought possible.”

The court notably did not rule against the merits of mail voting and its expansion – it focused instead on how that expansion occurred, saying the Constitution must first be amended to allow it.

“No-excuse mail-in voting makes the exercise of the franchise more convenient and has been used four times in the history of Pennsylvania,” Judge Mary Hannah Leavitt wrote for the court. “Approximately 1.38 million voters have expressed their interest in voting by mail permanently. If presented to the people, a constitutional amendment… is likely to be adopted. But a constitutional amendment must be presented to the people ”before legislation like Act 77 can take effect.

Act 77 was negotiated by Republican legislative leaders and Democratic Gov. Tom Wolf and was passed with widespread bipartisan support in 2019. It was the biggest change to Pennsylvania election law in generations.

In addition to the massive expansion of mail voting, the law extended the voter registration deadline from 30 days before Election Day to 15, and it removed the straight-ticket option that allowed voters to vote once for a political party and have that choice apply to every race on the ballot.

By overturning the law in its entirety, the ruling would roll back all those changes. The decision was three to two, with three Republican judges striking the law over the dissent of two Democratic ones.

Much of the core argument in the case focuses on two parts of the Constitution: The requirements for voter eligibility, which includes that “he or she shall have resided in the election district where he or she shall offer to vote at least 60 days immediately preceding the election, ”and a provision allowing absentee voting when voters aren’t able to vote in person on Election Day.

Relying on two 1862 and 1924 cases, the court said the “offer to vote” language means voters must cast ballots in person – with the only constitutional exception for absentee voting. That would require amending the Constitution before allowing everyone else to vote by mail.

The Constitution complicated Act 77 from the very beginning. Because of the constitutional provision for absentee voting, the legislature could not simply expand absentee voting. The law instead created a “mail-in” ballot, which was the same as the absentee ballot. That created two functionally identical types of mail ballots – and lawmakers blurred the lines between the two in a separate bill they passed in March 2020.

But Act 77 became politically toxic on the right after Joe Biden’s 2020 victory in Pennsylvania. Some conservatives blamed Trump’s loss on expanded mail voting and criticized Gov. Tom Wolf’s administration of implementation of the law, saying the executive branch overstepped its authority. Republicans also blasted court decisions, such as one that allowed mail ballots to be counted up to three days after Election Day so long as they were postmarked by then.

Republicans first brought a lawsuit accusing Act 77 was unconstitutional in the immediate aftermath of Trump’s 2020 defeat. They unsuccessfully sought to invalidate millions of mail ballots. Friday’s ruling came in a case that consolidated two lawsuits brought last year. One of those suits was brought by a group of Republican state lawmakers, many who had voted for Act 77.

“The simple fact is that despite near-unanimous Republican legislative support for this historic update to Pennsylvania election law, they now want to strip away mail-in voting in the service of the ‘big lie,'” Wolf spokesperson Elizabeth Rementer said in a statement, referring to the lie that the 2020 election was stolen from Trump.

»READ MORE: She lost big in the Philly suburbs. She went hunting for voter fraud. Now Kathy Barnette is a rising GOP star.

The Commonwealth Court ruling Friday is likely to fuel momentum among Republicans to enact more restrictive voting laws. Wolf’s term ends in January 2023, and the Republicans running to succeed him vowed to repeal Act 77 and described election security as a top priority – including enacting stricter voter ID requirements and abolishing no-excuse mail voting.

“What we’ve gone through in the past couple of years can never happen again,” GOP gubernatorial candidate Dave White said Thursday in a debate in Blair County. “We need to have voter ID, we need to have confidence in our elections. Without confidence, we will not have a democracy. “

Also during the debate, Republican Jake Corman, the Senate president pro tempore, highlighted his support for a Senate GOP investigation of the 2020 election: “We have to restore faith in the election process.”

Republicans say there are still deep doubts about the 2020 election. But those doubts have been fueled mostly by a sustained and baseless attack by Trump and his allies, not actual evidence of wrongdoing.

Democrats say the GOP push for tighter voting rules reflects not genuine problems, but rather the party’s embrace of Trump’s false claims of a rigged election.