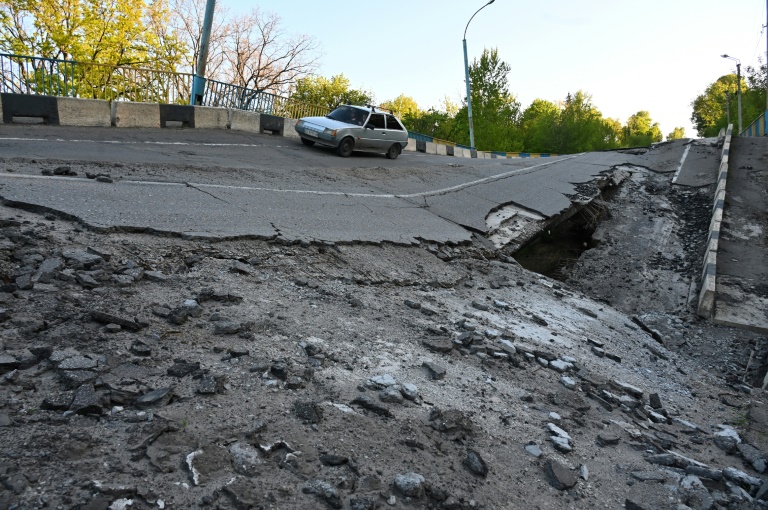 A new UN convoy is expected on Friday to evacuate the last civilians holed up in the Azovstal steel mills in Mariupol, the last enclave of Ukrainian resistance in this strategic Donbass port, without however guaranteeing a truce in the fighting.

Despite this ambiguity, the United Nations Assistant Secretary-General for Humanitarian Affairs, Martin Griffiths, announced Thursday that this new convoy is heading towards the city of martyrs, which has become one of the symbols of the Russian invasion that began on February 24.

“As we speak, a convoy is on its way to Azovstal by tomorrow morning hoping to recover the remaining civilians from this dark hell, which they have inhabited for weeks and months, and to bring them back to safety,” Mr. Griffiths said in Warsaw. The International Committee of the Red Cross confirmed it was linked to it.

One hundred civilians were already able to leave this compound at the end of last week, during an evacuation operation organized by the United Nations and the International Committee of the Red Cross.

However, information about the situation at the Mariupol steel plants, where civilians and fighters live fortified in huge underground galleries, remained contradictory.

In his message posted on his Facebook page, he said that Russian bombing continues “while civilians, women and children must still be evacuated.”

“Imagine this hell! There are children! More than two months of continuous bombing and death is constantly approaching.”

For his part, Russian President Vladimir Putin confirmed Thursday evening that “the Russian army is always ready to ensure the evacuation of civilians” from Azovstal, whose number may still be 200 Ukrainian fighters trapped in this complex.

Meanwhile, Kremlin spokesman Dmitry Peskov confirmed that the Russian army respected the ceasefire around the plant, and that the humanitarian corridors around Azovstal were “working”.

What was denied by the Ukrainian fighters at the site. The deputy commander of the Azov regiment defending these facilities, Svyatoslav Balamar, confirmed in a video that “bloody battles” were taking place at the site itself and that the Russians “did not fulfill their promise” to the armistice.

The complete capture of Mariupol, a pre-war port city of nearly 500,000 devastated by two months of Russian siege and bombardment, would be a major victory for Russia as it approaches May 9, the day it celebrates a large military parade in red. He achieved his victory over Nazi Germany in 1945.

The Ukrainians claimed that Russian forces were also preparing to advance in a march on Mariupol that day.

Since the start of the invasion of Ukraine, Moscow has only been able to claim complete control of one major city, Kherson, in the south.

The United States, the United Kingdom, and NATO as a whole constantly share intelligence data with the Ukrainian armed forces. He said that these actions, along with the supply of weapons (…), do not make it possible to quickly complete the offensive.

See also  Show at the heart of the solution against stagflation, David Malpass*

The New York Times wrote that intelligence provided by Washington to Kyiv led to the targeting of several Russian generals. The Pentagon on Thursday denied the information.

Peskov added that these measures “cannot, however, prevent” Russia from achieving its “goals” in Ukraine, ten weeks into a military operation that has left thousands dead and prompted the exile of more than five million Ukrainians. Russia insists that one of the original aims was to “disfigure” the country.

In this regard, the Russian President apologized, on Thursday, to Israeli Prime Minister Naftali Bennett for the statements of the head of diplomacy, Sergei Lavrov, stressing that Adolf Hitler was “Jewish blood,” according to a press release issued by Mr. Bennett’s office.

Volodymyr Zelensky puts forward this argument: How could Nazism exist (in Ukraine) if he himself was a Jew. I may be wrong, but Hitler also had Jewish blood,” Lavrov told Italian media group Mediaset on Sunday evening.

This claim written by the Russian Foreign Ministry, which refers to rumors that historians regularly deny, angered Israel.

On the diplomatic front, European Council President Charles Michel on Thursday spoke of the confiscation of Russian assets frozen in the European Union as part of sanctions against Russia, in order to help rebuild Ukraine.

For his part, the Ukrainian President launched a global fundraising campaign for Ukraine, Thursday, via a platform.

“With one click, you can donate money to help our defenders, save civilians and rebuild Ukraine,” he explained in a Twitter video. The homepage of the platform provides a choice between donating to fund defense, medical assistance or reconstruction.

Polish Prime Minister Mateusz Morawiecki announced Thursday that more than six billion euros had been raised “to help Ukraine and all those who support it” during an international donors’ conference in Warsaw.

Finally, the United Nations and several countries on Thursday called for an end to Russia’s war in Ukraine, with little sign of a resumption of seemingly stalled peace talks.

The Secretary-General of the organization, Antonio Guterres, during a meeting of the Security Council organized by Washington, reiterated that “Russia’s invasion of Ukraine is a violation of its territorial integrity and the Charter of the United Nations.”