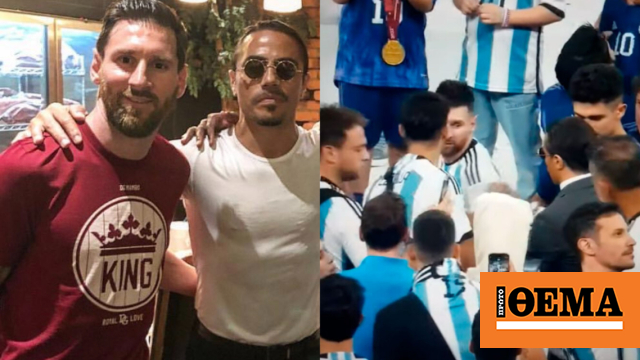 Turkish chef Nusrat Gokshimore commonly known as “The owner of the saltwho angered soccer fans after he disrupted Argentina’s title-winning celebrations world Cup At Lusail Stadium in Qatar, he wanted to prove that he was “close” to it Lionel Messi After the video showed him groping the Argentine captain to take a picture of him and ignore him.

The Turkish chef may have finally managed to convince Messi to take a selfie, but he failed to convince his followers that the Argentina captain knows him.

So he uploaded to his personal Instagram account a video of Messi’s visit to his restaurant in Dubai in 2018 to show that the two are “close”. In fact, on that visit, the then Barcelona star had with him the then Manchester United midfielder, Paul Pogba, whom the Turkish chef took a special interest in.

But instead of placating his followers who have criticized him for both chasing after Messi and carrying the trophy alone, which according to FIFA, only a very select group are allowed to touch and hold people, including former FIFA World Cup winners and heads of state. , pissed them off even more.

“A video from 2018 won’t save you, man,” one follower told him, telling him to control his ego. “You tried to get your way and Messi showed you your limits. You lifted the trophy as if you were part of the team and got their medals. You should know your limits man,” comments another. Another follower of the Turkish chef adds: “Now you are trying to convince us that you are friends.”

“My whole life, before I was in prison” – the Slovakian fraudster speaks to TEMA