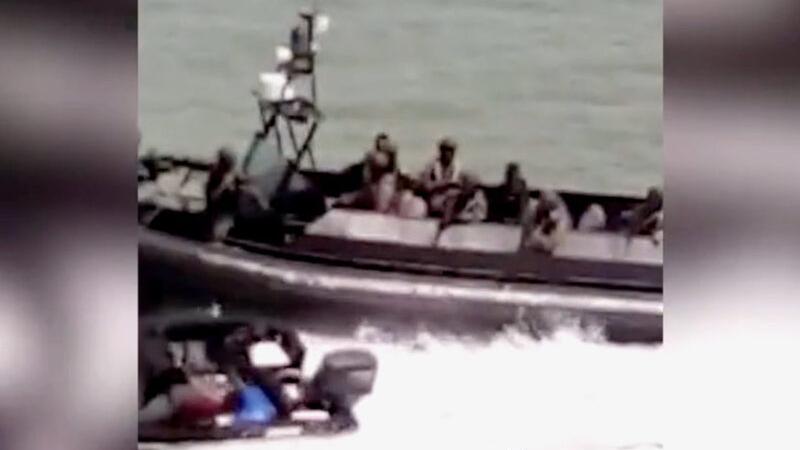 #Algeria : The Algerian coast guard uses their weapons by firing live ammunition at smugglers. Several of them have reportedly been killed in recent weeks. This is attested by a video obtained by the French media, Mediapart.

Despite the shipwrecks and the deadly dangers of crossing the Mediterranean, more and more young Algerians are heading out to sea, particularly towards the Spanish coast. It seems that the Algerian authorities are helpless in the face of the phenomenon of harragas for young people who no longer believe in their future in Algeria, and have chosen the powerful method to discourage immigrants and especially smugglers. Thus, after toughening the tone in the face of the widening of the clandestine immigration of Algerian youth, the Algerian Coast Guard could henceforth find no better than to use their weapons as a show to stop this phenomenon. Thus, according to several sources, they have killed many smugglers by shooting at their boats in recent weeks.

French media Mediapart Obtain a video that certifies this information. It actually shows the Algerian coast guard shooting at a smuggled boat that was returning to Algeria after it disembarked illegal immigrants in Spain, on April 25, near the coast of Oran. Fearing arrest, he refused to surrender.

>>> Read also: From Algeria to Spain, the “harragas” are ready to die at sea so as not to stay in the country

As we can see in these photos, the smuggler is trying to escape before he finds himself trapped between two Coast Guard boats shooting at him at least four times without reaching him. He will eventually be caught after one of the boats crashes into his boat.

This incident does not appear to be an isolated case. “Several weeks ago, they shot us,” confirms a smuggler who shuttles back and forth between the Algerian and Spanish coasts, according to Mediapart, explaining that “over the past two months, the Coast Guard has killed three or four people between Corrales, La Madrague, Cap Falcon and Aïn- Turck (four beaches in Oran). They were shot and killed in the same way we see in the video, live, in front of people.”

The fisherman’s testimony also confirms the smuggler’s story. Thus, he explains, “They’ve been shooting at smugglers for a few months now. Last Friday (April 29), just before sunset, three smugglers’ boats escaped and hid at Cape Lindells. Two Navy frigates and two Black Rib with specialized agents surrounded and circled them. He turned them around to make big waves, and then shot them in. At least one was wounded and several Hunters witnessed the facts.

According to an Algerian researcher quoted by Mediapart who preferred not to be identified, the measures taken by the authorities are nothing more than “dramatizing a security policy in the face of the increasing number of attempts to leave from Oran. The wall, like bullets, is nothing but a platform for the host countries, the Nordic countries, to tell them That the measures are there, that there is repression, but the authorities can do nothing. Everything is carried out in the logic of the aesthetics of the reception. ” According to the researcher, these methods used by the Coast Guard will not make it possible to stop this phenomenon, but they may increase the malaise of part of the population .

>>> Read also: Algeria: The plight of the Algerian harragas detained in Spain and left by their country

It should be noted that Algeria was reprimanded by European countries for not doing enough to curb the illegal immigration of its youth. This has seen an unprecedented scale in recent years, indicative of the social malaise prevailing in Algeria. Moreover, according to figures from the International Organization for Migration (IOM), more than 14,000 illegal Algerian immigrants joined Spain in 2021.