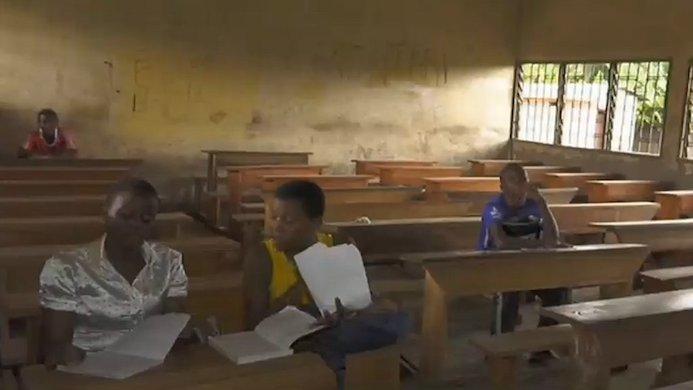 #other countries : Four unemployed students play Ludo on a smartphone placed on a bench. Almost deserted, this high school in Nkonsamgba, a town notorious for being rebellious in the West, is one of the symbols of the “chalk dead” movement of teachers in Cameroon, who accuse the force of “harassing” them.

In this Central African country of 28 million people, a group of secondary school teachers called “On a trop support” (OTS) launched a strike on February 21 that threatens to spread to other sectors.

They are demanding from the government of President Paul Biya – 89 years old, including nearly 40 undivided power – huge arrears of wages, bonuses and allowances for 181 billion CFA francs, roughly 276 million euros.

“Money in your pocket, chalk in hand,” they promise strikers on posters in high schools or on social networks. Hubert Libem II, an official at OTS, asserts that “a password is generally respected, even if it is not 100%”.

Their strike has caused “major turmoil during the school year and a major disruption to our education system,” acknowledged René Emmanuel Saadi, Minister of Communication on March 10, acknowledging “the legitimacy of most of the demands.”

Many teachers do not get paid or receive partial pay for months or even years.

Upon graduation, the teacher is assigned to a high school but is not immediately paid. Then he only receives, sometimes much later, two-thirds of his monthly salary – 130,000 CFA francs, less than 200 euros – until his integration into the public service, a procedure that can continue, explained to AFP Thierry Macon, an active member of the OTS.

Once merged, the state must pay him a “reminder” not to pay but “it is often necessary to give a bribe, up to 30% of the amount of the reminder,” to the officials responsible for the action, stresses the master. Libem II.

Ulrich Tadie was assigned to a secondary school in Nkonsamgba three years ago. “I received my first two-thirds of my salary a year later,” the young computer teacher lamented. And the state has not yet paid him the arrears. A striker, who comes to school every day, but wears all black for a week: “In honor of Mr. Hamido.”

The symbol of the early days of OTS on social networks, “Mr. Hamido”, a poor sports teacher in Al-Bika, in the north, moved by waving a sheet of A4 paper that read: “2012-2022 without Matricol – 10 years without payment – stop”. Hamido died of illness on March 8, at the age of 38, a few days after the Minister of Public Service announced his merger.

Biya on March 7 ordered the release of 2.7 billion CFA francs (4 million euros) – but only to pay for exam correction – and then the salary bonus paid from March to those who only realize two-thirds. He promised a “gradual clearing” of the unpaid debts of all, the day after Hamidou’s death.

“These measures are unsatisfactory,” the OTS responded, calling for the strike to continue “peacefully.”

Of the 58 students from Nlonako High School in Nkonsamgba, only two are. “This strike is punishing us, we are in a year of scrutiny,” one of them, Laure. In the adjoining chapter, Raïssa is, at first, alone. “We’re too late for the program,” she explains. “I’m trying to move forward by transcribing exercises from a former student’s notebook.”

Elsewhere in the country, teachers may be in the classroom but many do not teach, or are replaced by temporary workers.

On condition of anonymity, a teacher assures us that only private “contractors”, who were recruited by Nlonako High School by asking parents to pay more, are educating their children.

“Pay the teachers’ salaries” chanted recently on a street of high school students in Douala, the economic capital.

“I am sad. We pay for our children,” said Joseph Beyush, the father of a student in Maningol, near Nkonsamgba. The “registration” fee and additional fees can be quite high. More than one in four Cameroonians live below the extreme poverty line (at less than $1.90 a day or 1.70 euros), according to the World Bank.

In secondary schools in Cameroon, the enrollment rate was just 43% for girls and 48.9% for boys in 2016, according to UNESCO.

Discontent is not waning, while another movement, Too Much Too (TCT), is emerging among teachers, who sometimes teach without pay, threatening to win over other public sectors such as health and transportation.