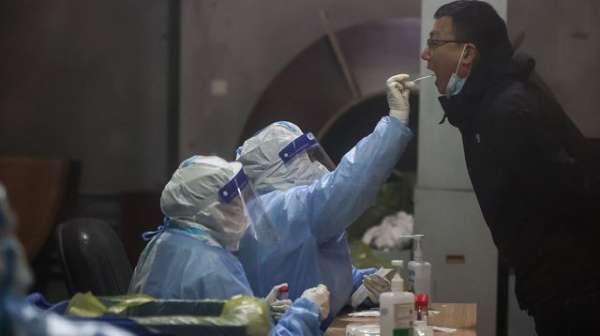 Inside the Chao Qu luxury apartment complex in Beijing’s Guomao financial district, the morning was unlike any other on a foggy and cold Sunday. Residents are urgently called in for unscheduled PCR tests.
There were long queues in front of the tents hastily set up in this vast complex chosen as a home by a large foreign community.
For George, the American resident of the resort for four years, the scenes bring back bad memories. Those who experienced the pain that people experienced after the outbreak of the epidemic in Wuhan a little more than two years ago.
In Beijing, the situation appears calmer compared to other regions where cases have doubled since the beginning of this month.
The increase in pollution appears to be the most serious outbreak of Covid-19 in the country since the first case was discovered. The outbreak prompted authorities to lock down a number of cities, including Shenzhen, the country’s technology hub, and parts of Shanghai, the financial capital.
The new restrictions, combined with the scale of the new boom, illustrate the atmosphere of fear that prevailed among provincial and municipal authorities in a country that takes so much pride in the efficacy of the “zero tolerance” approach that allowed it to do so. The virus slows to a peak in early 2020.
Dozens of companies, including global giants based in Shenzhen, have stopped production after the restrictions imposed by the authorities.
In Shanghai, this vast global financial center known for its strict policy that made it possible to contain the epidemic while ensuring the liquidity of economic activity, the authorities have recorded nearly 1,000 infections since the beginning of the month. On Sunday, about 170 cases were detected in the capital.
After the number of infections surged, the city suspended a lot of public transportation and advised residents to avoid non-essential travel. People leaving or entering Shanghai must take a negative PCR test.
According to the city’s media office, the origin of this new wave is the quarantine center for those coming from abroad.
In addition, the authorities launched large-scale checks, which increased the pressure on the hospitals of this city of 24 million people.
Nationwide, China recorded 3,505 new Covid-19 infections on Monday, a figure that brings the total number of confirmed cases in the country to 120,407.
It is certain that the cases recorded so far are still lower than other countries in the world, especially those in the East Asian region, where the infections are breaking records. But the authorities showed no signs of slowing down to contain the situation and prevent it from getting worse.
The new infections have prompted China to question the effectiveness of the so-called “zero tolerance” approach. The participation of local governments and municipalities in the fight against the epidemic is also called into question.
In Jilin, in the northeast of the country where 3,076 cases were identified on Monday, authorities rushed to build new hospitals and quarantine facilities. Many scenes raise fears of the return of the malicious virus in this vast country of more than 1.4 billion people.
Analysts say that restrictions on industrial zones in a country that occupies a central position in the international supply chain will certainly have a pronounced impact on global economic activity, citing in particular the high-tech and information technology sectors.
The new increase in pollution represents a serious test of the so-called “zero tolerance” policy thanks to which China has successfully eradicated the epidemic from the spring of 2020.
A la faveur de cette politique qui implique des mesures de confinement très strictes frappant des villes entières, le pays est parvenu à contenir la contagion, avec un bilan officiel d’un peu plus de 100,000 cas, dont 4.636′ mortels de en l two years.
Observers say the worsening epidemiological situation in China is likely to make it difficult for the government to achieve the 5.5 percent economic growth rate set in an executive report submitted to the country’s top legislature, which recently met in Beijing.
Aware of this situation, senior Chinese officials have doubled down on their outings in recent days to send messages of calm, stressing that everything will be done to strengthen the stability of the economic framework in order to achieve sustainable growth.
“The economy is facing new pressures and more difficulties and challenges,” Premier Li Keqiang said, calling for careful monitoring of the epidemic situation to provide appropriate responses and ensure stable growth, employment and prices.
At a time when the world was facing a very difficult situation due to the epidemic, China achieved a growth rate of 8.1% in 2021. An achievement that the government has largely attributed to the effectiveness of its strategy to combat Covid19.
The new wave that torpedoed several regions of the country has put Beijing before a new serious test of its resilience, especially its ability to navigate through adversity.

See also  Ukraine - The United States said that Russia may deploy up to 1,000 mercenaries on Ukrainian soil.