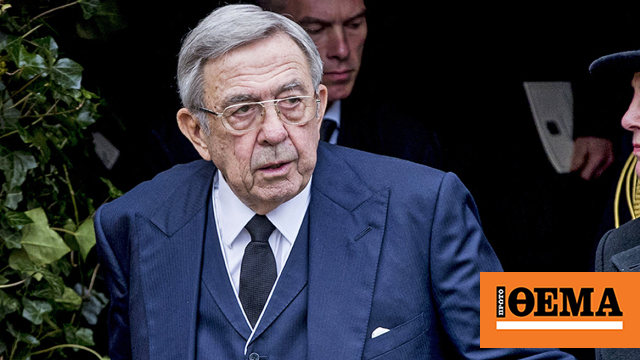 A month, a year and four decades passed Since Frederica’s death and the death of his son Constantine. It was February 7, 1981While the former Queen Mother He died of a heart attack in Spain, in the palaces of Zarduela. The funeral took place in Greece. At Tatoi Royal Tomb, After special permission granted by his Govt Giorgio Raleigh.


A lot has changed In past years. The spirits now calmed down. however, The deceased will be buried as a “private person”., as per 4 para 7 of the Constitution. “Titles of nobility or distinction are not granted or recognized by Greek citizens,” it says.

Exit Queue It will be held at 12:00 PM in the city, at the request of the family. It will be conducted by the authorities Archbishop Hieronymos. Other members can also participate Holy Synod. More specifically, the statement of the Holy Synod stated that the archbishop and the congregation expressed their heartfelt condolences to the family of the former king, which “invited them to the exodus Mass according to the rules of ecclesiastical order and etiquette”. .

There are many discussions about the possibility High priests Who will do the exit queue? to wear their full priestly garb. It is – ethically – Adds more formality And essentially another role in the ceremony. And, though formal No public pilgrimage is plannedIf the body is transferred in the morning to the church of Agios Eleftherios next to the metropolis, no one will stop those who want to worship.

Burial will take place at Tatoi, the former royal estate, the site of the tomb of the former royal family. At that point they started doing it Special teams are working hard They should be removed Burnt tree trunks and branches Remains from the fire in August 2021. The family also visited the place Monitor projects. However, space does not allow for much to be done.


The Minister of Culture will represent the Government Lina Mendoni. The family chose a historic funeral home. About it is located “Kianakopoulos in Kolonaki on Deinokratus Street, established in AD 1906”. The same office that handled the funeral of King Alexander I in 1920, he died on October 12 of a fatal monkey bite. 44 years later, specifically on March 6, 1964 He also took over the funeral rites of King Baal From “Pyloric contraction due to peptic ulcer”.

There are many Officers participating on television. All in all guests are not going to be outdone 200 people For practical reasons. The family loved it As many people as can be seated should attend It also takes into account the threat of the spread of the coronavirus within the metropolis. However, one thing will be noted strict protocol, Depending on each person’s position will determine where they will sit.

Naturally, the procedures provided for by the code of conduct will be observed for the officials attending the funeral. They come to Athens King of Spain, Philip With his wife Letitia. The Sophia was the mother of the king and the sister of the deceased, has been here since last Thursday. He had come directly from Italy for Pope Benedict’s funeral.

Although not yet certain, The gift may be given by Spain’s exiled ex-king, Juan Carlos. He may have avoided public appearances in recent years, but in the past He was very close to Constantine. Both families spent their summers at the “Marivent” palace.

They also go to Greece Sofia’s two daughters, Princesses Elena and Cristina of Spain. At the former king’s funeral, he will be represented A member of the British Royal Family. The Charles was out of the game right from the start, due to protocol. It states that the King of Great Britain should only attend the funerals of heads of state. However, he has already contacted the family personally and expressed his deepest condolences, while a personal visit will not be ruled out in the future.

Perhaps representing the British Royal Family Crown Prince William. It should be noted that Constantine was his godfather, when William was baptized by Konstantinos-Alexios, grandson of the deceased. However, the chances of him coming are high Prince Edward is Elizabeth’s youngest son. Representatives of the royal families of Denmark, Sweden and Norway will also attend.


Due to attendance A large number of officials, security measures are an important issue. Although the list of names of the incoming officers is yet to be finalised, the Ministry of Empowerment is working on it Plan to avoid anything that might disrupt the ceremony It also threatens the safety of the officers.

The authorities know Exact time of arrival and departure of each official, as well as his whereabouts and movements. AnywayThousands of police officers will be on the road Sunday to Monday.

Food is “squeezing” – prices rising at twice the rate of inflation!