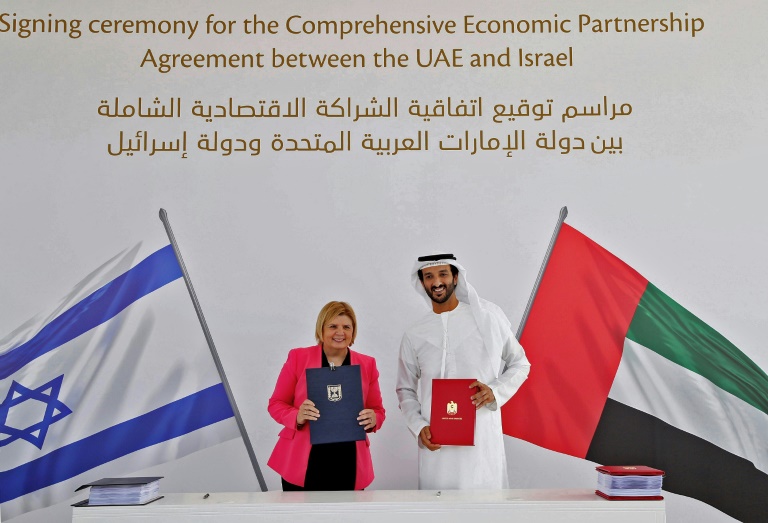 Israel and the UAE, which normalized diplomatic relations in 2020, signed a “historic” free trade agreement on Tuesday, the first of its kind between a Jewish state and an Arab state.

This agreement eliminates customs barriers on “96% of products” exchanged between the two parties, which amounted to $900 million (814.4 million euros) in 2021, according to official Israeli data.

“Israel and the UAE signed a historic free trade agreement, the first of this size between Israel and an Arab country,” Israeli Prime Minister Naftali Bennett said on Twitter.

He continued, “Under the leadership of my friend Mohammed bin Zayed (Al-Nyan, ruler of the Emirates) and thanks to a lot of determination, this is the fastest free trade agreement signed in the history of Israel.”

For the purpose of the free trade agreement signed on Tuesday, the talks began last November and concluded in early April after four negotiating sessions.

“UAE-Israel trade will exceed $2 billion in 2022 and reach nearly $5 billion within five years, backed by collaboration in the renewable energy, consumer goods, tourism and life sciences sectors,” said Dorian Barak, Chairman of the UAE Board of Directors. Israel Business Council, in a statement.

He added, “Dubai has become a hub for Israeli companies looking at South Asia, the Middle East and the Far East as markets.”

According to him, nearly a thousand Israeli companies will establish relations with the UAE by the end of the year.

For the UAE ambassador to Israel, Mohammed Al Khaja, the signing of this agreement is an “unprecedented success.”

He wrote on Twitter: “Businesses in both countries will benefit from faster market access and lower tariffs, as our countries work together to increase trade, create jobs (…) and enhance cooperation.”

The signing of this agreement comes two days after the “March of the Flags”, a march in the Old City of Jerusalem attended by thousands of Israelis to commemorate the occupation of the eastern part of the city in 1967, whose annexation has not been recognized. by the international community.

The march came amid tensions between security forces and Israeli and Palestinian demonstrators who viewed the annual march as a provocation.

About 2,600 non-Muslims, tourists and Israelis visited the precincts of mosques, one of Islam’s holiest places, on Sunday, a number much higher than usual.

The UAE “strongly” condemned this “attack” on Monday.

The free trade agreement was also signed nearly three weeks after the killing of Palestinian-American Al Jazeera journalist Shireen Abu Akleh on May 11 during an Israeli operation in the occupied West Bank.

The UAE called for an “impartial, independent and transparent investigation”.

See also  For Audrey Azoulay, there is "less than 10 years left to reverse the trend" - Moroccan women