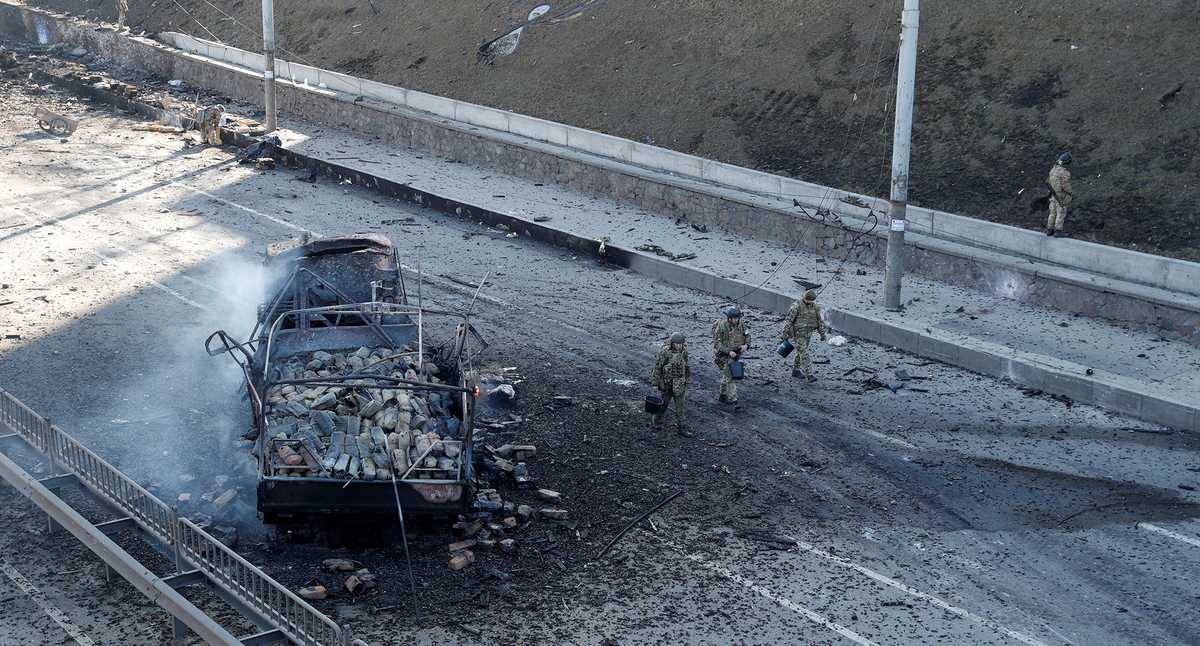 Russia’s Defense Ministry has confirmed that it destroyed “large-scale” weapons supplied to Ukraine by the United States and European powers during a bomb blast in the southeastern part of the country on Wednesday, April 27.

“Hangers with large quantities of foreign weapons and ammunition supplied to Ukrainian forces by the United States and European countriesDestroyed by high-precision Kalbir missiles, It was fired from the sea at the Zaporizhia aluminum plant in southeastern Ukraine, ”the ministry said in a statement.

However, Russia did not specify what kind of weapons were destroyed in the attack. Separately, the Russian military also said it had carried out bombings against 59 targets in Ukraine. Of these, 50 soldiers were staying and four were ammunition stores.

The announcement comes after a meeting of representatives of about 40 countries in Germany, convened by the United States, on Tuesday. How to strengthen the security of Ukraine.

The United States, the United Kingdom, France and the Czech Republic initially refused to supply attack weapons to kyiv, but changed their position.

For its part, Ukrainian forces on Wednesday advanced Russian forces east of the country, occupying the Kharkov region and several towns in the Donbass. At the moment, the Russian Defense Ministry has not commented on this information.

Russian energy company Gazprom suspends gas supplies to Poland and Bulgaria from this WednesdayThis means that they will not face deficits, as both countries have announced.

“Today (Tuesday), Bulgargas EAD received an announcement that it would suspend supplies from Gazprom exports from April 27, 2022,” the Ministry of Economy said in a statement.

“On April 27 Gazprom informed PGNiG of its intention to completely suspend (…) supplies under the Yamal Agreement,” the Polish State Gas Company said in a statement.

However, members of NATO and the European Union, Poland and Bulgaria, have promised that there will be no shortage as they are ready to retrieve the missing gas from other sources.

“There will be no shortage of gas in Polish homes,” Climate Minister Anna Moskva said on Twitter. “From the first day of the war, we declared our readiness for complete independence from Russian raw materials,” he added.

To deal with the situation, the Bulgarian government announced that it had taken steps to “find alternative agreements for the supply of natural gas”.

“If necessary, we will resolve issues arising from the position of those on the block list to streamline top contacts.”He insisted.

The United States, in conjunction with its allies, has imposed a series of sanctions on Russia in response to the invasion of Ukraine, including a ban on the import of Russian oil or other products such as vodka. It also restricts trade relations with the Eurasian country.

The Kremlin has warned that gas supplies will be cut off from Russian accounts if they are not paid in rubles, following Western countries’ acceptance of sanctions against Russia.

However, Moscow has made it clear that the price of gas will be in the currency of current agreements, almost always in euros or dollars, and that customers will have to make a simple transfer process in Russia.

“The Bulgarian party fully complied with its obligations and made all necessary payments in a timely manner.”The Bulgarian government said after Gazprom’s announcement.

The Balkans have condemned the “new two-stage tariff proposal proposed by the Russian side.”

“It did not comply with the current agreement until the end of this year and presents significant risks to the Bulgarian side, such as making payments without receiving any gas supplies from the Russian side,” he added.

Russia imposes sanctions on Joe Biden and other officials

The Russian government has imposed sanctions on US President Joe Biden, Secretary of State Anthony Blingen and other top US officials in response to similar measures taken by Washington in retaliation for the occupation of Ukraine.

In total, 13 officers in that country have been affected by these sanctions No further details were released.

The Russian Foreign Ministry has indicated this The move comes in response to “a series of unprecedented sanctions barring key Russian officials from entering the United States.”Russian news agency reported Toss.

* With information from AFP and Europa Press.

As this is news of global interest, all content about the conflict between Russia and Ukraine will be freely accessible to our readers on all SEMANA digital platforms.