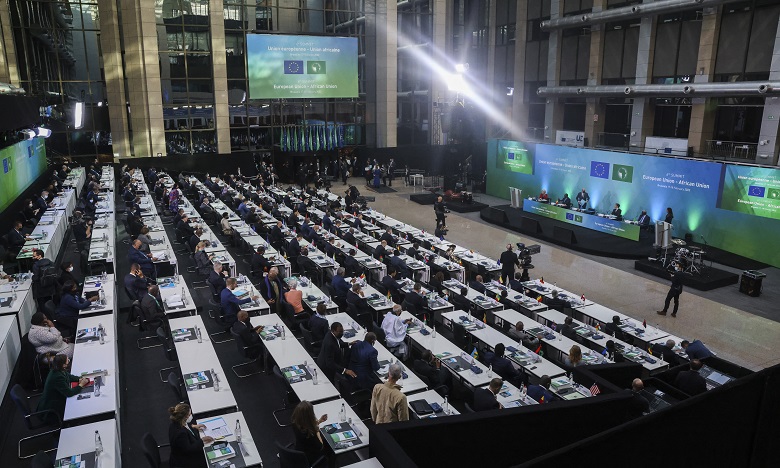 The sixth summit of the African Union and the European Union concluded on Friday with new initiatives and the promise of a renewed partnership that will allow the two continents to lead their common future in solidarity, security, peace and sustainable development.

However, the anomaly scratched the seriousness of this meeting and caused obvious embarrassment on the European side.

The false tone that came to rock the surrounding music is none other than the controversial and questionable presence of the leader of the Polisario militia, who has let himself be carried away by his whims, giving himself lines wider than his shoulders by wanting to measure himself against him. The legitimate heads of state and government support storming this summit.

Backed by the generous Algerian logistics who were, in equal measure, very keen on this criminal, from his arrival at the airport on the famous Benbatouche Airlines plane, to his transfer to a palatial mansion in the European capital, the head of the Polisario and the squad that accompanied him spent their time picking up Selfies posed behind their four-colored outfits and begged for a benevolent handshake from those they met on their way, to later use as brainwashing material to instill in their propaganda networks.

These short pleasant moments always clashed with the bitter reality of not finding an attentive ear or a compassionate look to relieve their frustration. For its part, European telecom services were keen to prevent any intrusion of images in their media that would fuel publicity associated with the presence of the Algerian man.

→ Read also: EU-AU Summit: Africa and the EU need each other more than ever

Even before the arrival of the Ghali & Co gang in Brussels, the European Union issued a public statement confirming in the clearest possible way its consistent and long-standing position not to recognize the pseudo-SADR. This is !

Feeling the embarrassment caused by this tired guest within the European institutions, the EU spokesperson had to stress during a press conference that the European position does not allow any ambiguity, recalling the unanimity of the 27 member states not to recognize the “European Union”. doll entity. Moreover, this unwanted participation, not only by Europeans but also by almost all African countries, was firmly and definitively rejected by EU leaders who opposed the quiet and supposed boycott of this individual, which was turned into a folding seat At the far end of the conference room.

He kept under the Algerian foreign minister, who also looked gray during this summit, the genocide was ruled out b. European bodies refused to welcome him and welcome him.

In the same impetus for this series of disappointments, the ghostly presence of the separatists aroused strong protest and indignation from many MEPs, angered by the blatant impunity enjoyed by this individual who has been prosecuted for the most heinous crimes by the courts of EU member states and who benefits from protection Algerian diplomatic cover. Let us recall in passing that it was on an Algerian passport that he apparently entered Belgian territory under the anxious and, above all, disapproving eyes of the authorities.

If today the European Union has given evidence of its caution, vigilance and firmness in the face of the false poker game organized by Algeria, by refusing to accept this notorious criminal and his accomplices and by refusing to offer him a suitable platform in the heart of the European capital, then the pathetic spectacle offered by the African Union to see him in his invitation Voluntarily, he challenges all those who have invested and who believe in this ideal of African integration to end this farce.