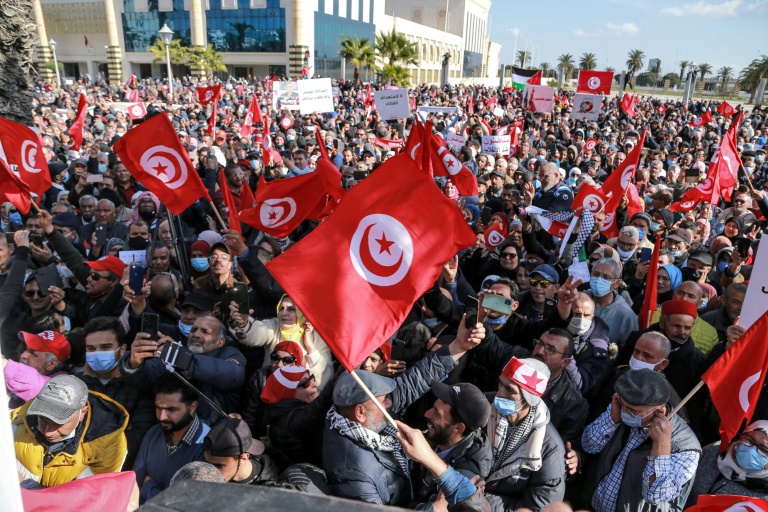 Thousands of Tunisians took to the streets on Sunday to protest a controversial new decision by President Kais Saied allowing him to extend his power over the judiciary, in a move seen as a democratic setback in the birthplace of the Arab Spring.

And the President of the Republic announced, in a decree, that he had replaced the Supreme Judicial Council, which he had dissolved a week ago, with another “temporary” body, giving himself the power to dismiss judges and prevent them from striking.

A few hours after this announcement, more than 2,000 protesters gathered in Tunis to protest and express their concerns about the independence of the judicial system.

“The people want what they don’t want,” the demonstrators chanted, referring to the main slogan of the 2011 revolution that toppled the dictatorship of Zine El Abidine Ben Ali.

“Preserve our democracy!”, “Do not touch justice! Can we read on the banners raised by the demonstrators?

The decree, which establishes a temporary “Supreme Council of the Judicial Power” appointed in part by the president, also gives Mr. Said the power to remove “any judge who fails to perform his professional duties”.

Furthermore, “the law prohibits judges of all ranks from striking or undertaking any organized collective action that would disrupt or delay the normal functioning of the courts.”

Since 25 July 2021, Mr. Said, with the support of the army and security services, has taken measures to consolidate his power, causing his critics to fear a return to authoritarian rule.

He initially suspended the elected parliament and dismissed the government, then on February 5 dissolved the CSM, an independent body set up in 2016 to appoint judges.

The president accused CSM of “bias”, of being influenced by the conservative Islamist Ennahda party, his pet anger, and of slowing down investigations into the 2013 assassinations of left-wing activists Chokri Belaid and Mohamed Brahmi.

Mr. Said faced a flood of criticism in his country but also from Westerners after the dissolution of the National Security Council.

For Ezzedine El Hezki, of the Citizens Against the Coup movement, the protest against the president is gaining momentum.

Mr. Al-Hazqi told AFP that Mr. Saeed “has won a lot of support in the past, but is now alone”, with his movement denouncing the president’s actions since July as a “coup”.

Said Benarbia, regional director of the International Commission of Jurists, a Geneva-based NGO, said the new decree “reinforces the subordination of the judiciary to the executive.”

Benarbia added, “The decree, if implemented, will mark the end of the independence of the judiciary and the separation of powers, and thus the end of democracy in Tunisia.”

This decree gives broad powers to the president, allowing him to control the career path of judges, such as suspending or removing them. He said it was a violation of basic principles of the rule of law.

A number of Ennahda supporters participated in the demonstration in Tunis, calling for the release of the former Minister of Justice and the second man in the party, Noureddine El Beheiry, and Fathi Baladi, the executive official of this inspiring Islamist formation.

The two men were arrested and forcibly taken on January 31 by plainclothes agents to an unknown location. Mr. El-Buhairi, who is on hunger strike, was taken to hospital the next day in Bizerte (North) after his health deteriorated while Mr. Baldi’s whereabouts remain secret.

On Wednesday, Human Rights Watch condemned the “secret detentions under the guise of a state of emergency,” recalling that “no arrest warrant was issued and the authorities did not reveal any official charges against them.”