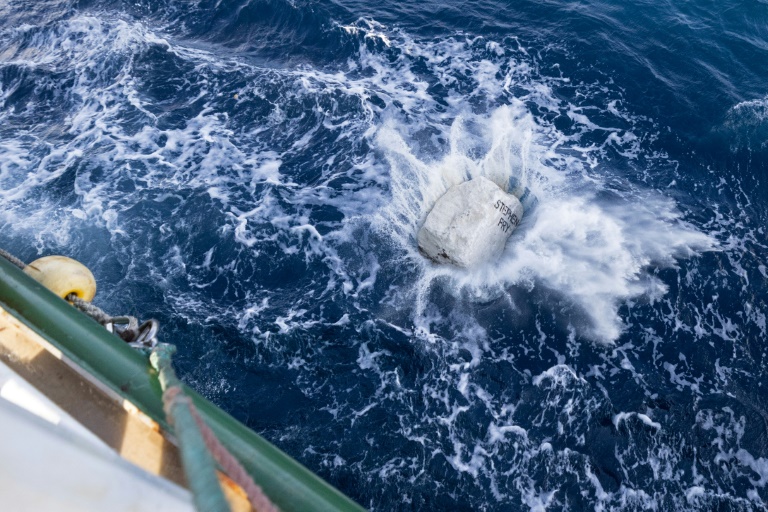 Unlike ships that usually sail from the southwestern tip of England, the Greenpeace crew does not throw nets into the sea, but huge blocks of stone. Its goal: to prevent “destructive” industrial fishing practices.

On board the Arctic Sunrise, the environmental defense group’s famous oceanographic vessel, activists landed at sea Thursday, in the heart of an officially protected marine area, 18 blocks of limestone weighing between 500 and 1,400 kilograms.

Idea: To make bottom trawling impossible, these huge nets are used by huge trawlers that damage the seabed and kill non-target species.

“We put large limestone boulders on the seabed to create a protective barrier that keeps the area out of the reach of destructive fishing,” activist Anna Desky told AFP.

She adds that what “immediately prevents the destroyed fishing vessels from operating in the area by preventing them from dragging their fishing nets along the sea floor”.

For Will McCallum, Greenpeace UK, this is a measure to “protect the oceans as a last resort”. “We’d rather see the government do its job,” he said, as seabed trawls are allowed in most of the country’s MPAs.

For him, permission for such a practice in these areas is “obscene” and “a mockery of the so-called (politics) + protection +”.

For Our Future, Simon Pegg or Stephen Fry: Activists wrote letters or the names of celebrities supporting work on limestone blocks.

One of the rocks that was dumped into the sea was cut into the form of ammonite, a fossil often found in the rocks of Portland, a peninsula on the English Jurassic coast from which the stone blocks come.

According to the environmental group, the South West Debs is “one of the most heavily fished + marine protected areas in the UK”. He called on the government and future prime minister, who will be appointed next week, to “ban industrial fishing in all British marine reserves by amending fishing licenses”.

The organization cites figures from the “Global Fishing Watch” which states that 110 vessels – more than half of them from France – have managed to fish nearly 19,000 hours in the area in 18 months.

Among them, benthic trawlers spent 3376 hours in the protected area.

“The UK has marine protected areas that are protected in name only. In the vast majority of cases it is perfectly legal for industrial fishing vessels to fish there, destroying large amounts of marine life, destroying habitats, our fish stocks and the livelihoods of fishermen. locals,” says Anna Desky.

For Neil Whitney, a fisherman from southern England quoted by Greenpeace, the practice amounts to “running a reaper in a national park”.

Bottom trawls are “capable of destroying an entire ecosystem, and if they cause such a collapse, they just have to move elsewhere,” he lamented. “Industrial fishing (…) is destroying our marine environment, and small British fishermen like myself are the biggest losers.”

According to him, it is “absurd” that trawling is allowed in a protected marine area. These areas are “supposed to allow the species to regrow,” he asserts. “It is a logical question.”