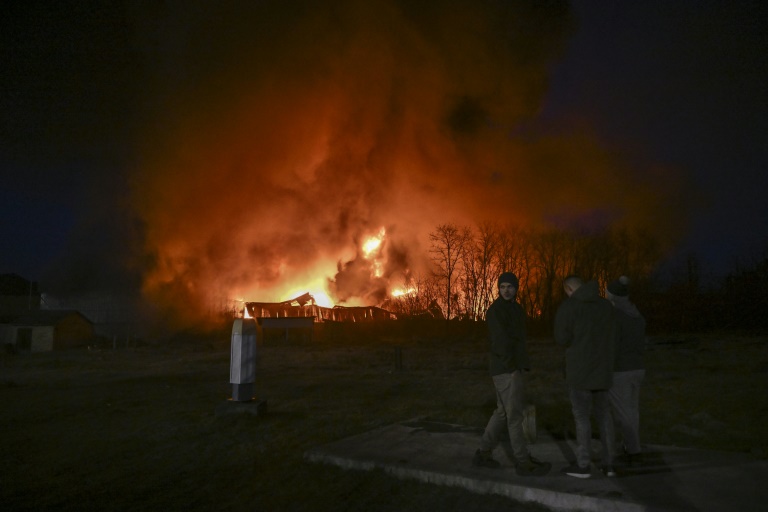 Ukraine: bombing near Lviv airport, Biden will send a warning to Xi

Areas around Lviv airport in western Ukraine were hit by Russian “missiles” on Friday morning, the city’s mayor said, as US President Joe Biden prepares to warn his Chinese counterpart Xi Jinping against any temptation to back Moscow.

Andrei Sadovy, the mayor of this large city near the Polish border, wrote on his Facebook account: “The missiles hit the Lviv airport area,” stressing that the strike did not directly hit the airport facilities, but rather an aircraft repair plant.

“The factory has been suspended before, so there is no loss of life now,” he said.

An AFP reporter saw a plume of smoke rising into the air above the area, along with police cars and ambulances racing in that direction.

The city of Lviv has survived the fighting so far. But the Russian military bombed a Ukrainian military base in this area on Sunday, killing at least 30 people.

The Russian Defense Ministry announced, Friday, in Mariupol, a strategic Ukrainian port besieged in the southeast of the country, that the Russian army and its separatist allies are now fighting in the city center.

“Units of the Donetsk People’s Republic (self-declared, editorial note), with the support of the Russian Armed Forces, tighten their grip on the blockade and fight the nationalists in the city center,” the ministry’s spokesman noted. , Igor Konashenkov.

He also asserted that Russian forces and separatists in Luhansk now control 90% of these lands that are part of Donetsk in the Donbass region and whose independence has been recognized by Moscow.

The capture of Mariupol would be an important turning point in the conflict and would allow Russia to ensure territorial continuity between its forces from the annexed Crimea and the Donbass forces.

As the fighting continued, Joe Biden and Xi Jinping planned to discuss Moscow’s war in Ukraine at 1:00 PM GMT Friday. The tone was set Thursday by Secretary of State Anthony Blinken.

“President Biden (…) will make it clear to him that China will take responsibility for any action aimed at supporting Russian aggression and that we will not hesitate to impose costs on him,” Blinken said.

“We see with concern that China is considering providing direct military assistance to Russia,” he added.

Since the beginning of the Russian invasion on February 24, the Chinese Communist regime, which prioritized its relationship with Moscow and Russia’s involvement in deep hostility toward the United States, has refrained from urging Russian President Vladimir Putin to withdraw its forces from Ukraine.

But China may have already begun to distance itself from Moscow because, according to diplomats at the United Nations, Russia on Thursday night gave up on a Security Council vote the next day on a war-related resolution. its closest allies.

For their part, the G7 foreign ministers warned in a joint statement the perpetrators of war crimes in Ukraine.

“Deliberately targeting civilians is a war crime. After so much destruction in the past three weeks, I find it difficult to conclude that the Russians are doing anything other than that,” Blinken said.

Ukrainian President Volodymyr Zelensky appealed to Westerners on Thursday to help “stop this war” as a Russian raid killed at least 27 people in the east of the country.

For him, “a people in Europe is being destroyed.” “Help us stop this war!” He added, he was praised by the German Bundestag deputies, whom he addressed on Thursday via video link.

Volodymyr Zelensky also accused the Russian Air Force on Wednesday of “intentionally” bombing a theater in Mariupol where hundreds of residents were refugees.

He added: “The world must finally recognize that Russia has become a terrorist state.”

According to the Mariupol city council, “more than a thousand” people were in an air raid shelter under the theater when it was bombed. No results have been reported at this point.

Russia claimed that it had not bombed the city, and claimed that the Ukrainian Nationalist Azov Battalion had destroyed the building.

According to the Italian Minister of Culture, Rome is “ready to rebuild the theater.” “Theaters in all countries belong to all of humanity,” he wrote on Twitter.

Mariupol Municipal Council reported that the situation was “serious” with “continuous” Russian bombing and “enormous” destruction.

According to preliminary estimates, about 80% of housing in the city was destroyed.

“They are firing a lot of missiles, there are a lot of civilian corpses in the streets,” Tamara Kavonenko, 58, told AFP.

Bombing also continued in Kyiv and Kharkiv, the country’s second largest city, where at least 500 people have been killed since the start of the war.

The capital slowly came back to life on Thursday after lifting the curfew imposed since Tuesday evening. It was emptied of at least half of its 3.5 million inhabitants.

On Thursday, the Ukrainian Prosecutor General’s Office said that one hundred and eight children have been killed and 120 others injured in the country since the Russian invasion.

Three weeks into the invasion, Moscow showed no sign of abating in its offensive although talks between the belligerents continued.

But Mr. Blinken considered that Russia has not yet shown “significant efforts” in its dealings with Kyiv to try to find a way out of the crisis.

“On the one hand, we applaud Ukraine for staying at the negotiating table while it was bombed, and on the other hand, I haven’t seen any major effort on the part of Russia to put an end through diplomacy to the war they are fighting,” he said.

More than three million Ukrainians have taken the path of exile, the vast majority of them to Poland, sometimes just a stage before continuing their mass exodus.

On Wednesday, Vladimir Putin said in a speech that the attack “was successful”.

However, Britain’s Ministry of Defense said on Twitter on Friday that “logistical problems” in providing troops with food and fuel as well as strong Ukrainian resistance “significantly limit Russia’s offensive capabilities” on the ground.