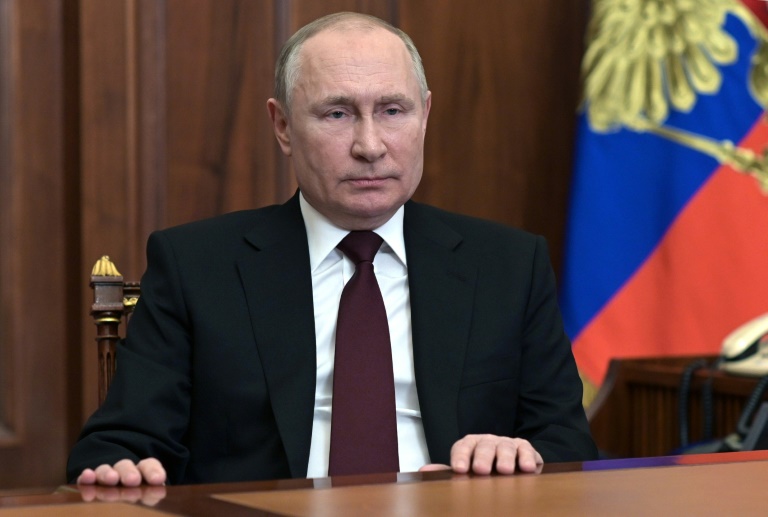 Ukraine: Putin recognizes the independence of the separatist regions and threatens Kiev

Vladimir Putin on Monday recognized the independence of pro-Russian separatist regions of eastern Ukraine, ignoring pressure from Westerners who strongly condemned the decision and risked setting fire to gunpowder.

“I consider it necessary to take this decision, which has been ripe for a long time: the immediate recognition of the independence of the Donetsk People’s Republic and the Luhansk People’s Republic,” Putin said in a televised address that lasted about an hour.

The Russian president immediately called on Ukraine to immediately stop its “military operations” against the separatists or to take “responsibility for the continued bloodshed”.

Then the Russian president signed agreements of “friendship and mutual assistance” with these regions.

It concerns the recognition of the independence of two pro-Russian regions of the Ukrainian Donbass, a mining and industrial basin on the border with Russia: the self-proclaimed republics of Donetsk and Lugansk.

This action marks the end of the Franco-German-brokered peace process, which, although regularly violated, has made it possible to stop the fiercest clashes in this conflict as it has achieved more than 14,000 clashes since it broke out in 2014 after the annexation of Crimea by Moscow. .

Above all, it opens the door to a Russian military deployment in these areas at the invitation of local authorities.

The announcement comes at a time when Westerners fear an imminent invasion of Ukraine, on whose borders more than 150,000 Russian soldiers, according to Washington, have been waiting at arms for weeks.

Ukrainian President Volodymyr Zelensky said in the evening that he discussed this Russian recognition with US leader Joe Biden.

The European Union, like NATO and London, denounced this decision, considering it a “flagrant violation of international law” and affirmed that it would respond “firmly”.

Western countries threatened Moscow with severe sanctions in the event of military aggression, but it was not clear what measures could be taken after this Russian recognition.

The United States announced sanctions against the separatist regions of Ukraine.

Putin’s decision comes at the end of a crazy day that saw Moscow double down on accusations against Ukraine, such as the destruction of a border post by Ukrainian artillery or the infiltration of a team of “saboteurs” to kill five members.

Kiev has openly denied the allegations, which Westerners say is part of Moscow’s efforts to create a pretext for military intervention.

In his long televised address, Mr. Putin also reiterated his baseless accusations of “genocide” which, to observers, are intended to bolster Moscow’s rhetoric about the need to “protect” Russian speakers in Ukraine.

With a professorial tone, he also gave a history lesson revisited by the Kremlin, presenting Ukraine as an artificial inseparable state from Russia.

To the end, the Europeans tried, in vain, to persuade Putin not to recognize the independence of the separatists.

Shortly before his announcement, Putin communicated his decision to French President Emmanuel Macron and Chancellor Olaf Schultz, mediators in the conflict in eastern Ukraine, who have expressed “disappointment,” according to the Kremlin.

Macron, who has taken the lead in European efforts to try to defuse the Ukraine crisis, convened a defense council meeting on Monday evening.

And the French presidency announced, on Sunday evening, that it had made a promise to hold a summit between Mann. Biden and Putin to ease tensions, but the Kremlin dashed those hopes on Monday.

However, Russia’s diplomatic chief Sergei Lavrov said he would meet his US counterpart Anthony Blinken Thursday in Geneva.

– Appeal to the United Nations –

Tensions, which have risen steadily in recent months, have risen over three days with renewed clashes in eastern Ukraine, where Kiev and separatist forces have been clashing since 2014.

In eastern Ukraine, clashes continued on Monday, with Kiev reporting 15 shells fired by pro-Russian rebels, during which two Ukrainian soldiers and a civilian were killed.

Meanwhile, the rebels have reported three civilians killed in shelling in the past 24 hours.

Russia confirmed on Monday that at least 61,000 people had been “evacuated” from separatist regions to its territory.

“It’s the real war,” said Tatiana Nikolina, 64, one of those people who were transferred from the Donetsk region to the Russian city of Taganrog. “They couldn’t find a middle ground and that’s why all of this continues.”

Faced with the threat of invasion, Ukraine called an “immediate” meeting of the UN Security Council.

Meanwhile, Mr. Putin has again criminalized Western countries, accusing them of “using Ukraine” which “is a serious, very great threat to us”.

The Russians defend themselves against any project to invade Ukraine, but demand an assurance that Kiev will never join NATO and the alliance’s withdrawal from Eastern Europe.

See also  Russian-Western tension: Mariupol on the verge of falling ...