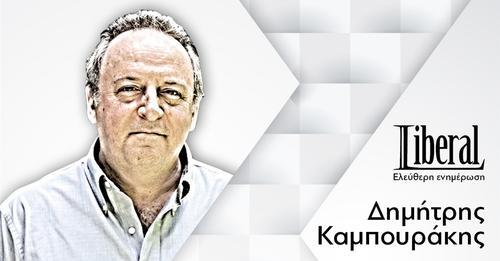 So here comes the next list. Interesting as well as crazy. It begins with Gerapetridis and ends with Maria Sarafolko. It would be nice to see Mitsotakis state minister if he is a spy for Tsipras, but what does he expect to learn from ANT1’s Maria and Epsilon’s Bryonis? Telesale numbers for the ANT1 news bulletin before its telecast or its scaffolding or Cretan aloe vera drinks? Let’s get a little serious.

From the first moment I heard about the viewing, I was hooked. From my political beliefs and from my nature, I am very wary of such dangerous electronic games, which create the belief that they are gods in their owners. Let me tell you that there is a whole line of centrist moderates like myself whose support for Griagos is not, and not always unconditional.

We voted for him and supported him because he is a serious person, he understands our complex and competitive societies, he understands the position of Greece in the world, he defends the homeland, he is a fan of reforms, he is not a fan of guilds. He has a desire to digitize our hydrocephalus condition that afflicts us, prefers to create wealth to give rather than distribute poverty and is not bothered by the hostility of the Syriza people who politicize through the permanent construction of enemies.

In short, we voted for Mitsotakis for some simple, logical and ordinary things. If these disappear or if any Asuras appear on our side we have nothing to raise our handkerchiefs and salute. Clear speech. We don’t have hard cores elsewhere. We decide the election result in every election contest which is understandable to all employees everywhere.

See also  After the Russian invasion, Blingen canceled his meeting with Lavrov

But on the other hand, we are not stupid. Neither naive nor gullible. They won’t shove the list of five in our faces without evidence, and we will follow them like sheep to a shepherd playing dumb animals. We know how easy it is for some to think about setting up surveillance networks, and for others how easy it is to set up a subversive lie. We know these things too, don’t think so.

So, ditch the lists-lists-lists and bring proof-proof-proof. And if not concrete evidence (which we understand is hard to find), then at least concrete signs-symptoms-symptoms. No one guides us to easy and pre-made decisions about what we will evaluate, who is the leader and who is the mastermind. Let’s see if they exist, we have brains, we have judgment, we don’t owe anyone, we understand everything.

Otherwise, ditch the weekend listings. Thirty names every Saturday, empty and without any other element, can no longer tell us anything. The first list we were bitten by was, “What’s going on here?” We said, frowning in disbelief at the value we’d expressed yesterday’s second, more bitter, expression. Let them pay attention, because the third, again without evidence, we laugh. And let’s conclude that this is a maximum muff and a total lie. So, let them immediately take care to surprise us.