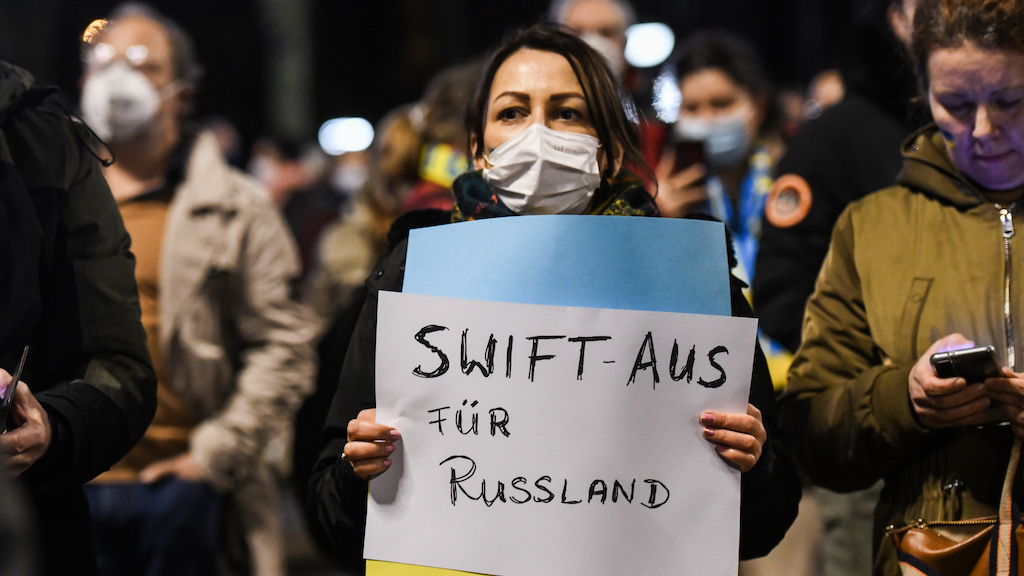 The European Union has added Russian President Vladimir Putin and Foreign Minister Sergey Lavrov to the list of Russian officials targeted for sanctions.

This decision was adopted on Friday at a meeting of European Union foreign ministers, and decided to ratify the package of sanctions adopted Thursday evening by the heads of state and government of the 27.

This includes, in particular, the ban on the export of aircraft, spare parts and equipment to Russia for the aviation and space industry, as well as refining technologies for the oil industry.

In addition, dozens of Russian officials are now persona non grata in the European Union and have their assets frozen.

Belarus, accused of involvement in Russian operations, will also be subject to additional sanctions.

Three European Union countries – Poland, the Czech Republic and Bulgaria – announced on Friday the closure of their airspace to Russian companies.

United State
US President Joe Biden on Friday tightened measures against Russia, adding as did 27, London, Putin and Lavrov to the list of sanctioned Russian officials, who are now banned from traveling to US soil. An extremely rare figurative act.

The United States will also impose sanctions on the Russian Direct Investment Fund, which is Russia’s sovereign fund aimed at attracting investments in the Russian economy.

The first tranche of US sanctions affects four Russian banks, including the country’s two largest, Sberbank and VTB Bank, and has cut more than half of Russian technology imports.

Energy giant Gazprom and other major companies in the country – 13 in all – for their part will not be able to raise money on Western financial markets, a penalty that has already been imposed on the Russian government itself.

The United States also expanded the list of sanctioned Russian oligarchs and restricted exports to Russia of technological products intended for the defense and aviation sectors.

Washington also announced sanctions against 24 Belarusian individuals and organizations accused of supporting and aiding the Russian invasion of Ukraine.

United kingdom
The United Kingdom also froze the assets of Putin and Lavrov and banned the private planes of Russian oligarchs from British skies. London had previously banned Aeroflot from serving the UK and issued sanctions targeting the banking sector, technology exports and five businessmen.

In addition to five banks already sanctioned on Tuesday, Russian public banking giant VTB has been targeted and its assets frozen on British soil, as has arms maker Rostec.

Canada
Prime Minister Justin Trudeau also decided to impose sanctions on Putin and Lavrov, and indicated that he supports suspending Russia’s membership in the international banking payment system, Swift. He also announced the imposition of sanctions on Belarus.

In total, about 60 individuals and entities belonging to the circle of Russian power, including the private security company Wagner, will be punished.

Reactions in this part of the world are less unanimous. India, which has close ties to Russia, has so far refused to impose sanctions.

On the other hand, Japanese Prime Minister Fumio Kishida imposed measures targeting semiconductor exports and financial institutions. Kishida also announced further measures “on exports to Russian military-related organizations” and on “general-purpose goods such as semiconductors and items on a restricted list based on international agreements”.

Taiwan also announced its intention to impose sanctions in contrast to China.

Australia tightened its sanctions on Saturday by targeting the oligarchs and all members of the Russian parliament, as well as government figures in Belarus. Canberra is preparing to punish Putin and Lavrov personally.

Australia previously announced sanctions against eight of Putin’s top security advisers and 25 others, as well as four entities that supply military equipment and four financial institutions.

Swiss
Swiss President Ignazio Cassis said that Switzerland decided on Thursday not to side with Western sanctions against Russia, but would take the necessary measures to avoid their use as a base for circumvention by Moscow.