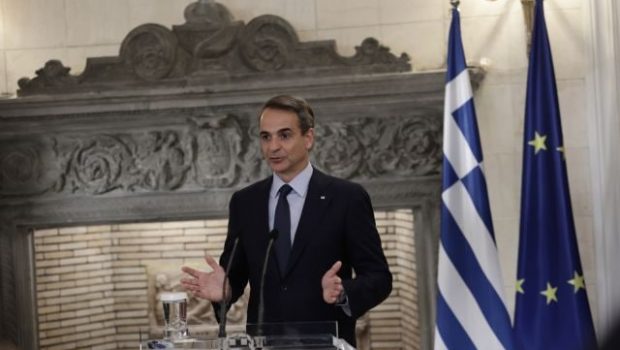 During her last visit Angela Merkel As mentioned earlier in joint reports with Kyriakos Mitsotakis Olaf SoulesHe noted that since then Greece has seen economic progress coupled with fiscal balance.

“Thanks primarily to the efforts of the Greek citizens and the government, since Mrs. Merkel’s visit to Greece, almost everything is very different in the country’s economy, society, the country’s international status. “Today Greece is finally outside of European supervision, with 11 positive ratings in the last three years, the most in Europe. “Showing one of the strongest growth rates, reducing unemployment and expecting a primary surplus by 2023,” asserted the Prime Minister.

At the same time, it has boosted investment and exports while reducing public debt, which will fall to 170% of GDP this year, proving that economic growth can go hand in hand with fiscal balance. “This overall upgrade comes at a time when my country is simultaneously defending itself against both the national challenges posed by energy precision, the war in Ukraine and the aggressive behavior of its neighbors,” he underlined.

The Prime Minister then referred to the consequences of the war in Ukraine and recalled Willy Brandt’s position in Athens in 1975 for a common European energy policy.

Mr. Mitsotakis noted that Greece and Germany are leading the “green transition” and gave the example of Astypalaia cooperation.

To reduce the gaps between us Mr. Mitsotakis said, also referring to war reparations and occupation debt in particular.

Europe cannot allow war on its soil, the prime minister noted, referring to the war in Ukraine after the Russian invasion. The Prime Minister also mentioned Cyprus.

Kyriakos Mitsotakis spoke about the critical issue of the energy crisis and especially natural gas, which can be solved “by setting limits when markets become autonomous and by protecting citizens from unfair burdens”.

“Erdogan is poisoning his people with lies against Greece”, “the Greek islands do not threaten anyone”, Kyriakos Mitsotakis, referring to Turkey’s actions regarding immigration, are the issues he expressed to Olaf Soltz.

“History cannot be changed by fake maps,” the Prime Minister remarked. On immigration, the prime minister said, “Greece will protect European and Greek borders, prevent slave-trader incursions and save lives.”

We oppose international legitimate provocation, the Greek prime minister said, referring to Turkish aggressive rhetoric. According to international law, Mr. Mitsotakis stressed that the only difference with Turkey and the delimitation of maritime zones in the Aegean and Eastern Mediterranean could be resolved.

Finally, Mr. Mitsotakis congratulated Turkey for choosing the path of expansion, international legitimacy and peaceful coexistence. “For my part, they are always ready to extend a hand of friendship to me,” stressed Kyriakos Mitsotakis.