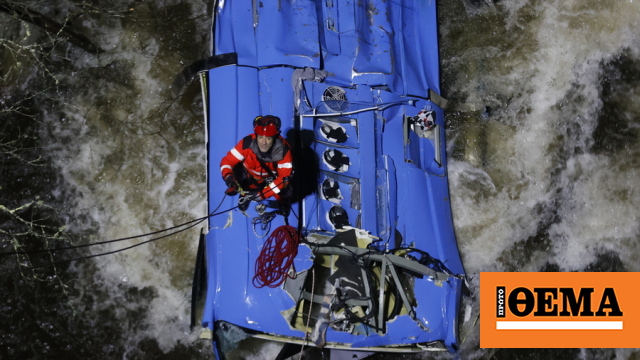 Six were killed and two injured after a bus plunged into a river in the northwest of the country Spain.

According to the authorities, a total of eight people were on board the car, which was traveling from Lugo to Vigo. Two were found alive: the driver and female passenger who are being treated in local hospitals. The remaining six passengers were killed.

The number of people missing remained unconfirmed for hours, as the motorist was in shock and could not remember exactly how many passengers he was carrying.

According to the representative of the local authorities, the victims are five Spaniards – including a woman with her son – and a young Peruvian woman who worked in the area caring for an elderly woman.

According to local authorities, the accident occurred shortly before midnight from Saturday to Sunday on a national road near the city Therdido-Cotopada relatively short distance from the border with Portugal.

(3/3) Emergency teams remain at the scene of accident N641, Bidri, as there could be more people inside the bus.

Rescuers posted on Twitter a wonderful picture, in which the bus can be seen submerged in the turbulent waters of the river, at the bottom of a ravine, among the logs,

The rescue operation was difficult due to the heavy rains in the area, which caused the Lirez River to rise, where the bus crashed. Because of the conditions, rescuers halted the search for several hours during the night.

See also  The end of the grain deal between Russia and Ukraine: new fears of food crisis and price explosion

The cause of the accident has not been clarified, but no It is unlikely that rain will play a role. The driver tested negative for a breathalyzer and did not use drugs.

Shocking video: A car hit a municipal employee who was emptying a trash can