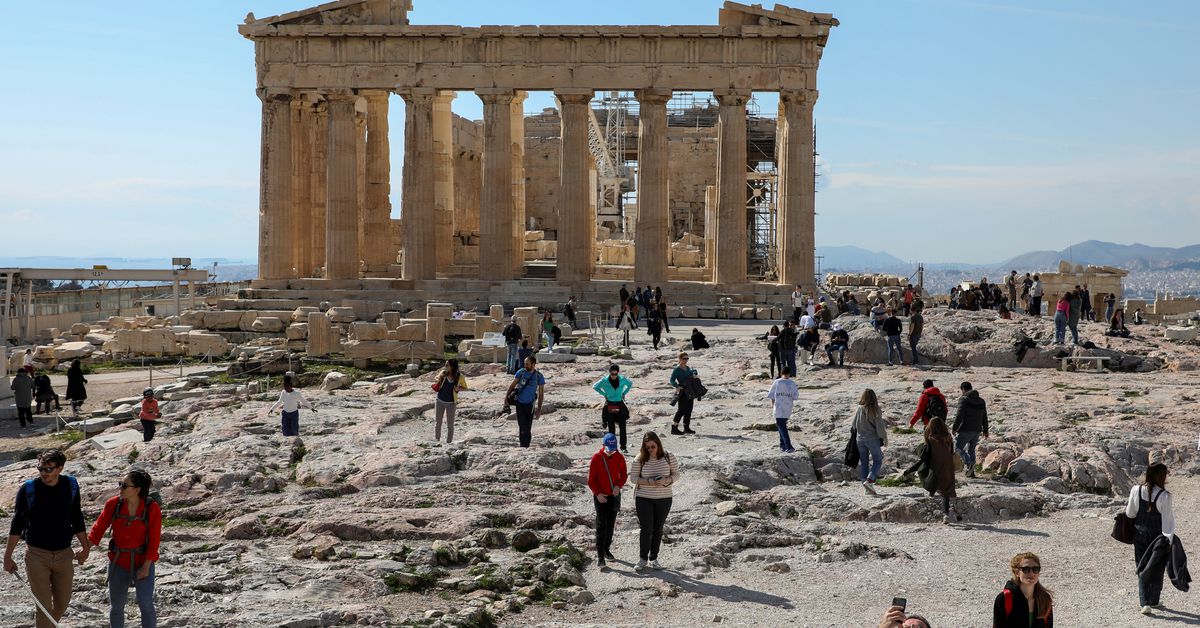 corfu, Greece, March 6 (Reuters) – It took a single electricity bill to crush Dimitris Diavatis’ hopes that his Greek summer resort could return to its pre-pandemic health this year, even as bookings poured in.

The amount was more than double what I paid at this time last year when the hotel wasn’t even open. After two lazy summers, the irony is not lost in him: “We’re not going to turn a profit in a good year,” he said. “Inflation will devour it.”

Greece – like other tourism-dependent economies on the periphery of the eurozone in the Mediterranean – is seeing signs of a much-needed rebound in visitor numbers in 2022 after two largely lost years. As in Spain, Portugal and Italy, the sector is a large employer and a contributor to state revenue.

But across the region, the pandemic has changed the face of tourism. Hotels were already struggling with soaring fuel bills and inflation that soaring energy prices in the wake of the Russian invasion of Ukraine would make the worst.

The disintegration of labor markets caused by COVID-19 has led to a significant staff shortage, while Italian tourism officials acknowledge that the pandemic-era holiday – with its focus on cleanliness, hygiene and space – is a major challenge for its aging infrastructure.

Meanwhile, a market for small, unassuming vacationers is opening up: in Spain and Portugal, the reluctance of many tourists to travel long distances has accentuated the trend of staying in rural areas in tents, campsites or caravans. Industry and government officials in Greece expect revenue to reach 80-90% of the record set in 2019, when 33 million tourists brought in €18 billion in revenue, equivalent to a fifth of the national product.

However, a bumper season is unlikely to offer much relief for the struggling companies that emerged from a decade-long financial crisis in 2018 only to have the pandemic halt global travel two years later.

The problem of rising heating oil, gas and electricity prices has been so exacerbated that the head of the Greek tourism association SETE, Yiannis Ritsos, wrote to ministers in January urging them to provide financial support, saying it was “objectively impossible” for hotels to cover their costs throughout the year, especially after the quieter winter months.

Although the Ukraine war has left interest rate expectations uncertain, the southern fringes still desperately need their tourism sectors to get back to work given the economic hit the conflict is set to deliver.

Speaking a day after the invasion, which Russia called a “special operation”, Greece’s Ritsos said it was too early to gauge its impact on the tourism sector.

More than a week into the conflict, there has been no noticeable increase in cancellations across the region.

Russian tourists make up only a very small percentage of this sector in southern Europe – 2% of revenue in Greece in 2019 and about 1% of overnight hotel bookings in Portugal. Turkey – outside the European Union – is a more popular destination.

But with European gas prices already at record levels, and likely to drive up inflation globally, concern in countries like Greece is that conflict will only exacerbate an already bleak outlook, slashing guests’ purchasing power and increasing costs Service Providers.

No end to costs

Even hotels that were closed during the winter fear they won’t be able to take on the extra burden, said Papis Vulgaris, head of the Corfu Hoteliers Association, having already agreed rates with tour operators last summer.

Resort owner Diavatis, who also owns a boutique hotel open year-round and a watersports complex on the island, agreed.

“This will be a real crisis for us,” he said. “I wouldn’t say it’s worse than the pandemic because at least we’re open. But we didn’t lose money at the time. Now we’re heading towards losing money.”

The Greek government has spent more than 42 billion euros on pandemic support measures since 2020 to keep businesses and families afloat and nearly 2 billion euros since September to support electricity bills through March. For hoteliers, support is not enough.

“In the summer, with the air conditioners on, the refrigerators, the kitchen, everything — I don’t see how it will turn out,” said Kostas Merianos, who owns a small family-run hotel on the Ionian coast of Corfu.

Across the sea in Italy, lockdowns and energy prices have forced many hotels to close permanently, said Marina Lalli, president of the Federturismo industry association.

She said that while Lalli had hoped tourism would approach 2019 levels this year, Italy faces the additional problem of being a “mature tourist destination with mature hotel structures in need of refurbishment”.

“In the post-COVID era, tourists are more concerned with quality, they want a guarantee of cleanliness and they want to feel safe.”

Greece has said it is opening its tourist season as early as March 1 this year to meet demand, but, as in Italy, Spain and Portugal, the season won’t start in earnest until the Easter holiday in April, a test before the vital summer months.

Greece and Italy are racing to fill a job shortage as the pandemic has forced workers abroad into better-paying jobs or in various sectors with less uncertain prospects.

In Greece, the Minister of Tourism appealed to refugees fleeing Ukraine, offering them residence and work permits to fill 50,000 job gaps in the hospitality field.

Demand for Spanish holidays has been very strong this year, according to Vice-President of Industry Association Exceltur, Jose Luis Zorrida, thanks to Spain’s high vaccination rates and the easing of epidemic restrictions in its large markets, the United Kingdom and Germany.

“There is a strong and accumulated appetite for travel in Europe,” Zureda said, anticipating an “explosion” in tourism from Easter onwards, but also lower profit margins due to inflation and energy prices.

However, Exceltur also found that tourists were looking for a different experience. In 2021, campground rents are up 19.2%, apartment rents are up 16% and cottages are up 11%. Hotel use fell 8%, a decrease also driven by fewer business trips.

In January, sales of new mobile homes and campers rose 34.1% year-on-year, according to the Spanish Association of the Caravan Industry and Trade (ASEICAR).

Nico Aru, who rented a rickshaw on the island of Tenerife, says he hasn’t been able to enjoy it since he bought it last March because orders are constantly increasing from Italy, France and Belgium. His biggest problem is that he can’t find another one to buy because it is in great demand.

“I benefited from the pandemic,” he said.

The desire for “slower” tourism has also grown in Portugal, as the sector played a crucial role in its recovery from the 2010 debt crisis. Tourism amounted to about 15 percent of GDP in 2019 but fell to 8 percent in 2020.

“There are more and more people looking for places with fewer people,” said Helder Martins, president of the Algarve’s Home Hotel Association. “I don’t think they will come back just wanting the sun and the beach.”

The centuries-old ‘schist villages’, built from the stone of a pine-covered mountainous region, are coming back to life after being deserted by young Portuguese over the years in search of work elsewhere.

“This summer is filling up fast,” said Sonia Cortes, who owns a five-room motel in the schist village of Janeiro de Cima, where builders are rebuilding traditional homes.

“The start of the pandemic was really tough for those who live on tourism,” she said. “(But then) those in the big cities looked for villages like this where they could feel safe.”

Bruno Ramos, who works for an agency promoting tourism there, said there has been a 30% increase in the number of overnight stays in the Xistan villages from 2019 to 2020-2021.

However, back in Greece, Merianos, owner of the Corfu Hotel, has a more realistic view of the months ahead.

“I would be happy if at the end of the season I don’t owe my staff, I owe the state, I owe the energy provider – even if I have 10 euros left in my wallet,” he said.