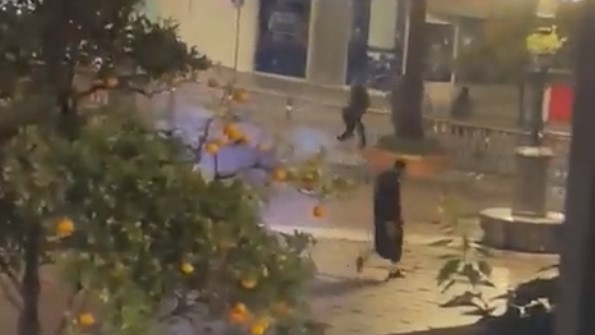 Tragic moments lived by the unsuspecting residents of the city of Algeciras in Andalusia in Spain When a man broke into churches with a machete.

According to the Spanish report the scientistThe incident occurred on Wednesday afternoon in the province of Cádiz when the man broke into his home waving a scythe In two churches, one person was killed and four others were injured.

The first photos from Algeciras of the jihadist holding the machete with which he carried out the terrorist attack against Christians. Let the weight of the law fall on his shoulders and on his partners. pic.twitter.com/j79608Mnk5

The local police announced the arrest of the attacker.

🎥 | Pictures of the arrest of the alleged killer of a person in # Algeciras Next to Plaza Alta.

Apparently, this person would also be the parish priest of San Isidro Church. pic.twitter.com/nYIGYapLz3

At the moment, its causes are unknown attacks And if there was any religious motive behind the perpetrator’s act or if it had anything to do with jihadist extremism, which the authorities are seriously considering.

Documentary video of a man in black brandishing a machete

The murderer who killed the priest in Algeciras pic.twitter.com/H5TjmH6WIN

According to what was reported by El Mundo newspaper, the attacker is about 30 of Moroccan origin and had visited the Church of St. Isidoros, located in one of the most famous neighborhoods of the city, where he began to strike the icons with a knife and then turned on the icons. The priest, who tried to chase him down, stabbed him in the neck with machetes. The priest was taken to the hospital and is in a serious but stable condition.

🎥 | Pictures of a neighbor near the Plaza Alta dei #Algeciras Where the person who had stabbed the sacristan of La Palma church can be seen.

According to police sources, he will already be under arrest. pic.twitter.com/IBgmkfrEqF

Then the perpetrator moved to Metropolis in Algeciras Spain The Nuestra Señora de la Palma church is located in one of the most central areas of the city, Plaza Alta, where the church singer was killed

What is the eyewitness report?

As reported by the Spanish media, europasur.esThe man broke into the La Palma church at around 19:30 when Communion was ending and began throwing icons, crosses and candles on the floor by hitting them with machetes.

Then the singer asked him to leave the church and the attacker started threatening him. As he left, he threatened two women, then the singer ordered him to move away, and then stabbed him.

According to eyewitnesses, the dead man started running towards Alta Square with a large wound, and the perpetrator pursued him, and when he fell to the ground, the executioner hit him on the head with machetes.

See also  The day before the start of the Mediterranean Games, Algeria chose to accuse Morocco of "conspiracy".