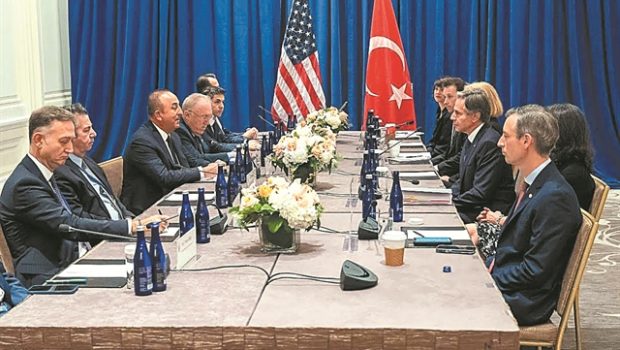 High-ranking diplomatic sources in the relationship reported that serious “engagement” had reached a dead end Erdogan – Washington, which seems to make the necessary alliance for Turkey very problematic – United States of America. And they continue to distance Ankara from the West.

A post also reflected on the front page – The Economist’s “fire” on the “threatening dictatorship” of Recep Tayyip Erdogan. Even if it is not the first, since the international media has been sounding alarm bells for a long time with the Turkish president’s inclination towards revisionism and his policies both in Greco-Turkish and in the wider region of the eastern Mediterranean, and not only.

The climate is changing towards Turkey, and the Russian invasion of Ukraine played a decisive role in that, as it decisively returned the issue of border protection, sovereignty and sovereign rights of states to the agenda of international politics. And they brought Turkish threats against Greece and Cyprus to the international agenda.

There is no obligation for F-16s

The visit of Turkish Foreign Minister Mevlut Cavusoglu to the United States showed that Washington does not intend to back down from Ankara’s demands without a fight. Instead, he enters into the bargain. The first loud warning against Erdoğan’s schemes and blackmail policy that threatens both the expansion and unity of NATO was the US administration’s refusal to give him the long-awaited answer about the Turkish F-16s. Cavusoglu returned to Ankara without committing to the fighter contract, which would also be a campaign weapon for Erdogan, while at the same time taking a written recommendation in the joint statement on the need to maintain stability and open communication channels in the east. The Mediterranean Sea. A message to both Greek-Turkish affairs and Ankara’s attempt to involve Libya and use it in its plans as a protectorate.

Even if it is clear that the US administration wants to give F-16s to Turkey and this was also reflected in the statements of the US State Department, at the same time it wants to place restrictions on Erdogan. The result is obstruction and turning the supply of fighters into a bargaining chip for Washington, which will also play out in the Turkish elections. Putting the Turkish Air Force in a bad position compared to the Greek, the Turkish generals admit. At the same time, the declared intention of the United States to award Athens the F-35 contract is a clear warning of a change in the balance in the region, with Athens gaining an advantage in the air, since the end of 2023 the supply of 24 French Rafales. To these it is worth adding the F-16s that are being upgraded to Vipers and are already being received.

The presence of Anthony Blinken in the region around February 20, when his tour of Greece – Turkey and Israel is planned, according to the information, is also interpreted as a message in favor of stability in the region. and calm tensions. It is expected that the development of the visit to Ankara will show Washington’s intention towards Erdogan, as well as whether the ministerial session of the 3 + 1 scheme, Greece – Cyprus – Israel + the United States of America, will finally take place, on the occasion of the US Secretary of State. Area tour. Such a decision could be very costly for Erdogan’s image.

See also  Pantsiri: "Tweets" of the former MEP - "Kylie is trying to defend herself"

Even Germany turns its back

Germany is also sending its own messages to Turkey, which seems to be in the post-Merkel era, with Olaf Scholz as chancellor, making various choices and taking a stand, abandoning dangerous neutrality. While every visit by a German minister to Turkey develops episodic, from the visit of Foreign Minister Analina Borbock onwards. The Russian invasion of Ukraine made the eastern Mediterranean a pivotal region in the new geopolitical balances. With Turkey being a key component of the United States’ plans. However, Erdogan’s policy makes the balance very fragile and difficult to maintain. In this environment, Athens is trying to take advantage of developments, realizing, however, that Turkey’s position, size, and importance to the region do not make its rejection realistic. However, they created favorable conditions for Greek interests for the first time.