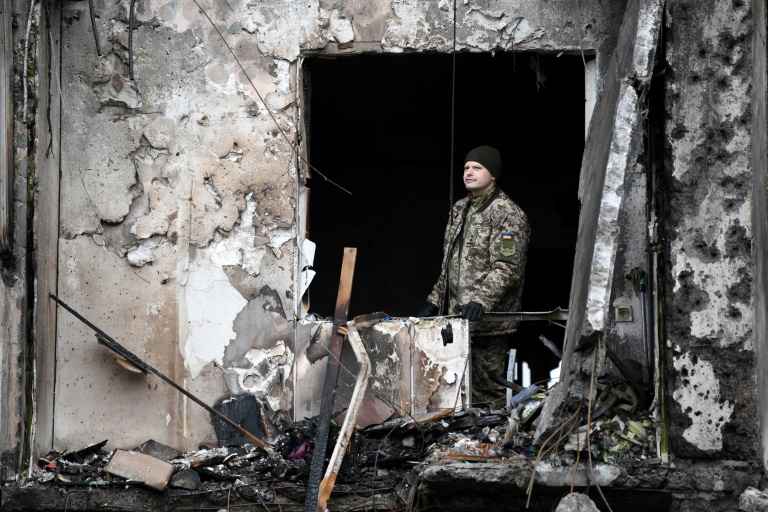 The situation on the ground, international reactions, and promises of sanctions: a point about the invasion of Ukraine by Russia.

Ukrainian President Volodymyr Zelensky accused the Russian army of “bombing civilian neighborhoods”. “It reminds us (of the Nazi attack) of 1941,” he said. According to the Ukrainian military, “rocket fire” targeted the city.

– Putin is ready for talks –

A spokesman for Russian President Vladimir Putin said he is ready to send a delegation to the capital of his Belarusian ally, Minsk, for talks with Ukraine.

Earlier, Russian Foreign Minister Sergei Lavrov stated that Russia was ready for negotiations if “Ukraine lays down its arms,” ​​stressing that the goal of the invasion was to “liberate” Ukrainians from oppression.

The Ukrainian president, who last night killed 137 and wounded 316 on the Ukrainian side, considered the European response to the Russian invasion too “slow”, and demanded that all retaliatory measures be “on the table.”

He called on Europeans with combat experience to travel to Ukraine to repel the invasion, after the government called on the country’s civilians to take up arms. The Ukrainian military estimated the material losses to Russia of more than 30 tanks, about 130 armored fighting vehicles, seven aircraft and six helicopters, in a report released yesterday night.

See also  COVID-19: Morocco is still in the green, according to Maad Merabet

European sources told AFP that the Europeans decided to punish Vladimir Putin and his foreign minister, Sergey Lavrov, by freezing their assets in the European Union.

The Russian president was “acting like the Nazis”, had previously been accused spokesman for the head of EU diplomacy.

Ukraine said on Friday that it had recorded alarming radiological data at the damaged Chernobyl power plant, which had fallen into the hands of the Russian army the day before, and Moscow, for its part, said everything was under control there.

Turkish President Recep Tayyip Erdogan, whose country is a member of NATO, criticized NATO and the European Union on Friday for not taking a “resolute action” in the face of the invasion of Ukraine, calling for “more decisive action”.

– Correction of the date, says the lion –

Syrian President Bashar al-Assad on Friday hailed the Russian invasion of Ukraine in a phone interview with his Russian counterpart, Vladimir Putin, calling it a “correction of history and restoring the balance of the international system after the fall of the Soviet Union.” union’.

– Pope tells Russians of his ‘concern’ –

Pope Francis visited the Russian Embassy to the Holy See in Rome on Friday morning to “express his concern” over the war in Ukraine.

The promoter of the Formula 1 World Championship announced, Friday, that the Russian Formula 1 Grand Prix, scheduled for September 25 in Sochi, has been canceled due to the Russian army’s invasion of Ukraine.

The European Football Association announced, Friday, that the Champions League final was moved to the Stade de France in Saint-Denis, near Paris, on Friday, and withdrew its organization in Saint Petersburg (northwest of Russia).