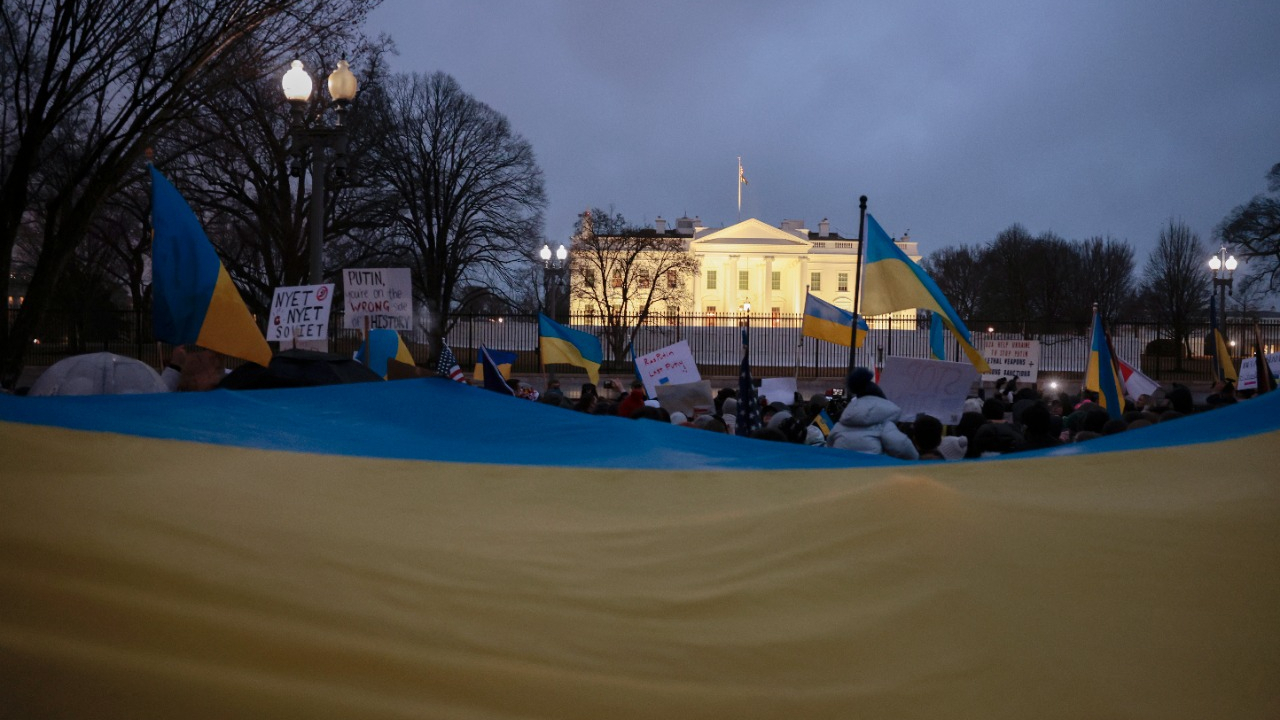 Two explosions were heard in central Kiev, the day after the start of the Russian invasion of Ukraine, according to an AFP journalist.

And the Ukrainian army indicated on its Facebook account that “missile fire” was aimed at Kiev, explaining that it destroyed two planes in flight. The mayor of the city, Vitali Klitschko, reported that three people were injured, one of whom is in a critical condition, by the debris of missiles that fell in a residential area southeast of the Ukrainian capital.

The advance of Russian forces raises fears of an attack and a doubling of targeted attacks on Kiev and on strategic and government targets.

According to Western military sources, the Russian army was approaching Kiev, where a curfew was imposed, with the aim of “decapitating the government” in Ukraine and installing a pro-Moscow government there.

Governor of Sumy Region (Northeast) Serhich Zhivitsky – Quoted from UNIAN . Press Agency– He said that “the machines (Russian, editorial staff) left Sumy in the direction of Kiev, a lot of machines.”

The Ukrainian Defense Ministry also reported, on Friday, a Russian missile strike in the early hours of this morning on a border guard unit in the Zaporizhia region, which, according to this source, caused “dead and wounded”.

In order to counteract the Russian invasion, Volodymyr Zelensky, last night, Thursday, February 24, 2022, issued a decree for general mobilization and the call-up of reservists within 90 days in all Ukrainian regions.

The leader also lamented that Ukraine was “left alone” in the face of the Russian army, while NATO indicated that it would not send troops there to support it.

And put the military forces of NATO countries on alert and some units will move to strengthen the eastern flank of the alliance.
The NATO summit on the crisis in Ukraine will be held via video link on the same Friday.

President Joe Biden emphasized that the United States, which would not send troops to Ukraine, would defend “every inch of NATO territory.” However, the Pentagon will send about 7,000 additional troops to Germany.

For its part, France will speed up the deployment of soldiers within the framework of NATO in Romania, the country bordering Ukraine, President Emmanuel Macron announced after an extraordinary summit of the European Union, and he also considered it useful to “leave the way open” for dialogue with Moscow to obtain a moratorium on its offensive.

The invasion caused a strong protest in the international community, especially from the western side.

The United States and Albania called for a vote in the United Nations Security Council on Friday at 8:00 pm GMT on a draft resolution condemning the invasion of Ukraine and calling on Russia to withdraw its forces immediately.

Joe Biden, who will become for him the master of the Kremlin “a pariah on the international stage”restrictions on the export of technological products to Russia.

The leaders of the 27 European Union countries have tightened sanctions on Russia, in the energy, finance and transport sectors, without going so far as to exclude it from the international banking system Swift. Commission President Ursula von der Leyen pledged that “Russian leaders will face unprecedented isolation.”

Moscow, for its part, promised a “strict” response to these measures.

At least 137 dead on the Ukrainian side

In the wake of the outbreak of the Russian offensive, President Zelensky on Friday put an assessment of the losses on the Ukrainian side of civilians and soldiers: at least 137 dead and 316 wounded.

Both sides made unverifiable statements, but the Russian army was victorious on the ground. In the Kherson region, it is located in several regions and controls Genichesky, a town located 300 km west of the Russian border.

However, the UK’s Ministry of Defense ruled, in a press release, that “Russia is unlikely to achieve its planned military objectives” on the first day of its offensive, confirming the “fierce resistance” of Ukrainian forces.

The Russian offensive began at dawn on Thursday, February 24, 2022, after Vladimir Putin recognized last Monday the independence of the Ukrainian separatist territories of Donbass.

“I took the decision of a special military operation” with the aim of “the disarmament and disarmament of Ukraine,” the Russian president was shocked when he announced this operation, but “we do not have in our plans the occupation of Ukrainian lands.”

To justify this intervention, he repeated his baseless accusations of Kiev-orchestrated “genocide” of the pro-Russian rebel “republics”, cited the separatists’ call for help and denounced the “aggressive” policy of NATO.

Immediately after Vladimir Putin’s speech, explosions called out in Kiev – as residents rushed to the metro to take cover – as well as in major Ukrainian cities. The Chernobyl power plant, which was the scene of the worst nuclear accident in history in 1986, later fell into the hands of Russian soldiers.

I quickly packed my bags.

About 100,000 people fled their homes in Ukraine and thousands left their country, The United Nations High Commissioner for Refugees expressed his regret.

The European Union said it was “fully prepared” to welcome them.

About 200 of them spent the night at the Polish station Przemysl (southeast). Olha, a 36-year-old teacher from Kiev Polytechnic Institute, said, “I heard the explosions next to my building … and I quickly packed my bags, took almost everything with me.”

In Moscow, anti-war rallies were held in the center of the capital as well as in St. Petersburg. A non-governmental organization reported that more than 1,700 people were arrested across Russia.

And Vladimir Putin warned Westerners “who will try to interfere”, that “Russia’s response will be immediate and will lead to consequences it has not experienced before.”

The Russian attack comes eight years after Moscow annexed Crimea and sponsored the seizure of parts of the Donbas River by pro-Russian separatists, sparking a regional conflict that has claimed more than 14,000 lives.

The Managing Director of the International Monetary Fund, Kristalina Georgieva, warned that the conflict – which has caused European stock markets to plunge and commodity prices to rise – poses a “great economic risk to the region and the world”, at a time when the global economy is trying to recover from the crisis. Covid-19 epidemic.